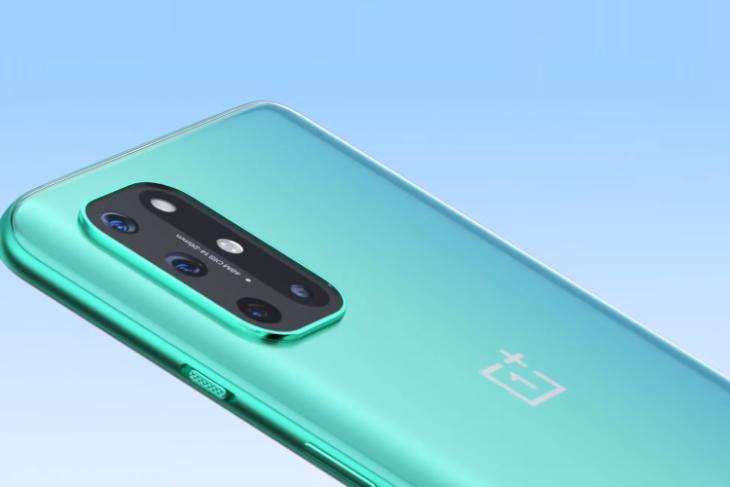 The OnePlus 8T launch is right around the corner (October 14) and the company has decided to officially unveil the design in its entirety. We now have a close look at both the rear and front panel of the OnePlus 8T. It looks really different from any previous-gen OnePlus phone.

The company has decided to part ways with the long-running vertical camera system and offer users something new with the OnePlus 8T. It features a rectangular camera cutout, closer to the edge, and includes four sensors and two LED flashes. The render confirms that OnePlus 8T will be helmed by a 48MP sensor, which will be paired with a 16MP ultra-wide, 5MP macro, and 2MP mono sensor.

Another big difference between the OnePlus 8 and 8T will have to be the design of the rear panel. The company has switched from a frosted matte finish to a glossy glass finish with the OnePlus 8T, reveals the official blog post.

We have “produced a remarkable glossy back cover for the new Aquamarine Green variant of the OnePlus 8T,” adds OnePlus. Also, the back panel is said to mitigate the build-up of fingerprints but that’s something we will have to test for ourselves.

In addition, the company has also revealed what the OnePlus 8T will look like on the front. The device now includes a flat display as opposed to the curved one aboard its predecessor. It still features a single punch-hole camera, which is said to be an ultra-wide-angle sensor, at the top left.

The company has also confirmed the display specifications. OnePlus 8T will arrive with a 6.5-inch AMOLED panel with a 120Hz refresh rate — a minor bump over the 90Hz refresh rate of the OnePlus 8’s display.

Apart from this, the device will be powered by the Snapdragon 865 chipset – the same as its predecessor. We expected the Plus variant aboard this device but that won’t be the case. It will be coupled with up to 12GB of LPDDR5 RAM and up to 256GB UFS 3.0 storage. Also, you will find a 4,500mAh battery with an upgraded 65W Warp Charge technology support.