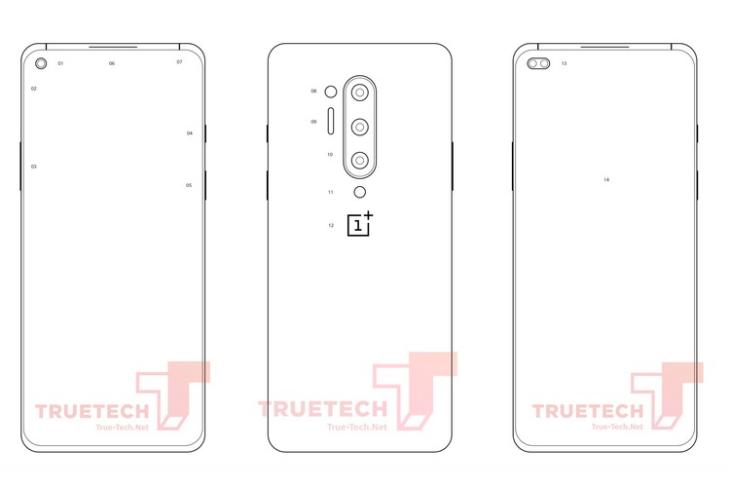 Newly-leaked Product Diagrams, supposedly of the OnePlus 8 Pro, suggest that the device may come with a quad-camera setup at the back and a punch-hole design upfront. Believed to have been originally published by True-Tech, the images were reportedly part of a PDF file received from an unnamed OnePlus employee. In the sketches above, the model on the left with the single punch-hole camera is said to be the standard OnePlus 8, while the ‘Pro’ model is believed to be the one on the right with the dual selfie-cams and an elliptical punch-hole design.

As for the back, there’s only one sketch to go by, so it isn’t immediately clear whether both devices will come with an identical rear design, which looks significantly different from what’s found on the OnePlus 7 Pro. The integrated camera housing seems to have just the three image sensors, with what seems to be an additional sensor just underneath the module. As pointed out by the report, it will very likely be a Time-of-Flight (ToF) sensor for 3D depth sensing.

The sketches also seem to suggest that the button placements on the device will be very similar to the arrangement on the OnePlus 7 Pro, which means buyers can still expect the volume toggle on the left and the trademark alert slider on the right, with the power button just under it.

The barebones sketches make it difficult to say anything else for certain, but from what one can see, the earpiece seems to be bit wider than the one on the 7 Pro, which may be good news in terms of volume and clarity. Other details remain … well, sketchy, for lack of a better word, but we’ll hopefully get more details in the days ahead.