Skip to content
Home News This Robot Taught Itself How to Walk Using AI, Reinforcement Learning 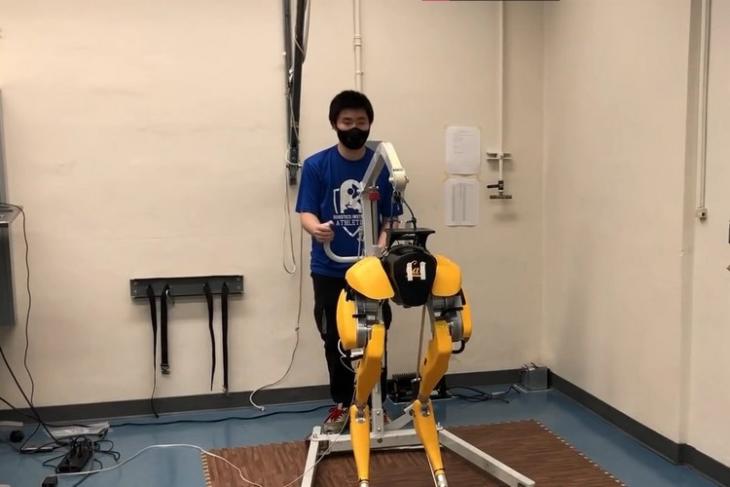 Ever since the concept of robotics emerged, the long-shot dream has always been humanoid robots that can live amongst us without posing a threat to society. Over the years, after a lot of advancements, we have seen robotics companies come up with high-end robots designed for various purposes. Now, we have a pair of robotic legs that has taught itself to walk.

Developed researchers at the University of California, Berkley, Cassie is essentially a pair of robotic legs without the torso. At first glance, it looks kind of creepy but when you see it learning to walk by trial and error, it looks (at least the movements) like a newborn trying to walk for the first time.

Why is the Robot Cassie Special?

Now, you might be thinking that we have already seen robots walk in today’s world. Robots like Boston Dynamics’ Spot and Atlas have garnered a lot of popularity on the internet, thanks to their viral video that released earlier this year. So, walking robots is old news! Then what is so special about Cassie?

Well, it turns out that choreographing a synchronized sequence of movements in robots is a lot easier than teaching a robot to walk by itself. In Boston Dynamics’ robot dance video, we have seen the robots perform in a confined space inside an advanced laboratory. So, as you can imagine, it required a lot of fine-tuning from robotics experts to program those dance moves in the robots.

However, imagine if they had to teach the robots to learn dancing by themselves. That would have been a tough egg to crack, wouldn’t it?

How Did the Researchers Crack The Code?

In the case of Cassie, the researchers used the reinforcement learning technique to teach the machine to learn to walk by itself. It is a trial-and-error technique that researchers use to train an AI’s complex behavior. So, using the technique, Cassie learned an array of movements such as walking while crouching and walking with an unexpected load from the ground up.

Once installed, Cassie was able to learn to walk by itself without any extra tweaks. Over the course of training, the pair of robotic legs were able to walk on slippery and rough surfaces, carry unexpected loads, and resist falling down when pushed. During the testing, Cassie resisted falling down even when it damaged two motors in its right leg.

Although this all sounds exciting, Cassie is still in the initial stages of development. However, the robotics experts Stanford University, London’s Imperial College, and Zhongyu Li, who worked on Cassie with his team, think that these are the fundamental steps to create advanced humanoid robots that can seamlessly merge into human societies in the future.