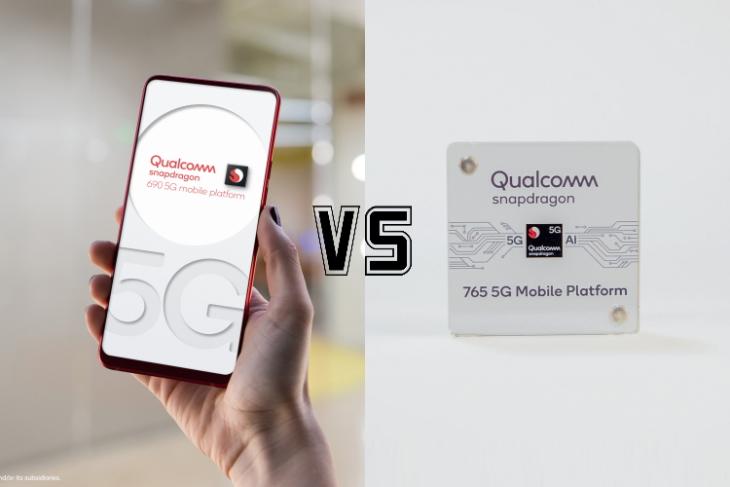 Qualcomm has bet all of its chips on the adoption of 5G across the globe. Not only the flagship Snapdragon 865 but the mid-range 5G-enabled Snapdragon 765 chipset that debuted alongside cemented its commitment towards this network technology. Today, Qualcomm has taken another crucial step, with the launch of the Snapdragon 690 5G mobile platform, to expand 5G adoption globally.

Now, due to the lack of active 5G networks in India, there’s still an air of uncertainly surrounding the launch of phones powered by Qualcomm’s mid-range 5G chipsets in the country. We, however, thought that it would be a good idea to see how the brand new Snapdragon 690 5G compares to Snapdragon 765 5G, its elder sibling, on paper. We’ll take a close look at the specifications of the Snapdragon 690 5G vs Snapdragon 765 5G:

Gaming on mobile phones is one of the many things buyers today consider before a purchase is finalized and you should get pretty good gaming performance with both Snapdragon 690 and Snapdragon 765.

We were not able to learn the exact clock speed of the Adreno 619L GPU at the time of publishing this article but will update you once we learn the same.

This is also the reason that the download and upload speeds for the Snapdragon 690 are limited to 2.5Gbps and 660Mbps respectively. It goes up to 3.7Gbps download and up to 1.6Gbps upload speeds for the Snapdragon 765 chipset. The rest of the features remain the same across the board, including support for both standard (SA) and non-standard (NSA) networks.

Both the Snapdragon 690 and Snapdragon 765 chipsets come equipped with basically the same ISP. The latter includes the Spectra 355 ISP while the former features a lite version of the said ISP – Spectra 355L ISP. It’s a dual 14-bit ISP that supports up to 4K HDR video recording (another first for Snapdragon 6-series), 192MP photo capture, and portrait video.

We decided to include the display section in here so you know the highest resolution and refresh rates supported by either chipset. I will keep it concise though.

Snapdragon 690 5G supports displays up to Full-HD+ resolution and 120Hz refresh rate. Its elder sibling, on the other hand, supports QHD+ display at 60Hz and Full-HD+ displays at up to 120Hz. This means phone makers can choose, if they wish to, offer an even higher resolution aboard their mid-range offerings.

Snapdragon 690 is the first-ever Snapdragon 6-series mobile platform to support up to 120Hz display.

Apart from this, as per the official data sheet, both the 5G-enabled chipsets support HDR10+ and 10-bit color depth. Ultimately, it’s up to the phone makers to offer the said features to the users.

Both the Snapdragon 690 and Snapdragon 765 serve up almost the same connectivity options – except for the 5G modems as we have mentioned above.

Both of the chipsets are WiFi 6-ready (802.11ax-ready) and supports dual-band WiFi out-of-the-box. There’s a minor difference on the Bluetooth connectivity front, with the newer Snapdragon 690 supporting Bluetooth 5.1 over Bluetooth 5.0 supported by the Snapdragon 765.

Qualcomm made it possible for phone makers to bring sub-Rs. 30,000 5G phones to the market with the Snapdragon 765 SoC earlier this year. It has since introduced an upgrade to this chipset in the form of Snapdragon 768. Now, however, the American chipmaker has decided to make 5G technology widely available and accessible to all users globally by launching the first-ever 5G-enabled Snapdragon 6-series chipset.

Qualcomm Snapdragon 690 will make phones with 5G support pretty affordable for anyone looking to get a taste of the high-speed network. It’s not very far behind its 5G-backed elder sibling and should bring great performance, AI capabilities, and camera features in tow. We are eagerly waiting to get our hands on the first Snapdragon 690 SoC-powered phone in the next couple of months.