The only thing I hate about the Google Pixel line of devices is that they clearly show what awesome features stock Android can offer and that I can’t have it. Even the original Pixel owners are deprived of many features that come with the new Pixel 2 phones. That’s why it’s so heartening to see Google porting many of these features to the older devices with its Android 8.1 Developer Preview. The public version is slated to hit the market sometime in December. So, before you can get your hand on it (if you are not ready to try the developer preview), let’s check out all the new features and changes that Android 8.1 has to offer us:

All The New Android 8.1 Developer Preview Features and Changes

Probably my favourite feature that is coming with the new 8.1 update is the support for automatic light and dark theme. The feature was launched with Pixel 2 which automatically changed the theme on the device depending on the type of wallpaper someone is using. For example, if you are using a light wallpaper, your phone will display the light theme, but if you change to a dark wallpaper, the theme also will automatically switch to a dark mode. I think the below pictures explain this better than my words can. If you love dark mode, you are going to love this update. 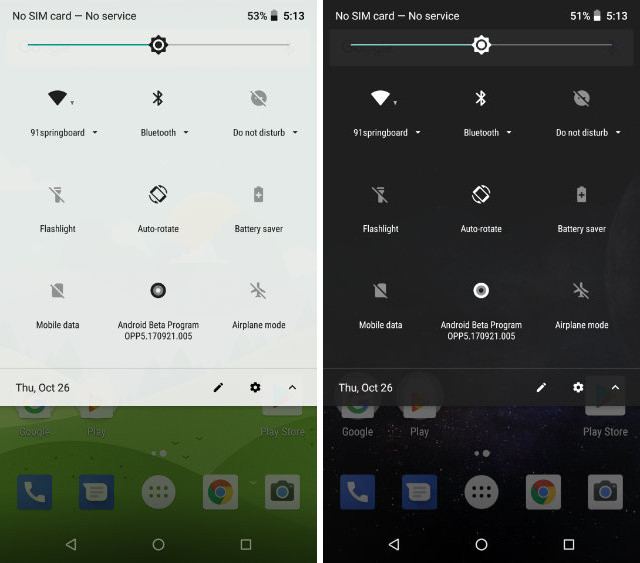 Another good feature which debuted with the Pixel 2 was the devices ability to show the battery levels of connected Bluetooth devices such as wireless headphones and speakers. This feature is really handy for people who have ditched the headphone jacks and gone totally wireless. Not only that, 8.1 update also makes it really easy to see those battery levels. Previously you needed to go to the Bluetooth settings to see the battery levels, but now you can get a nice visual cue, as it displays the battery just next to the Bluetooth icon in the quick-settings panel. Now, this is something I love. 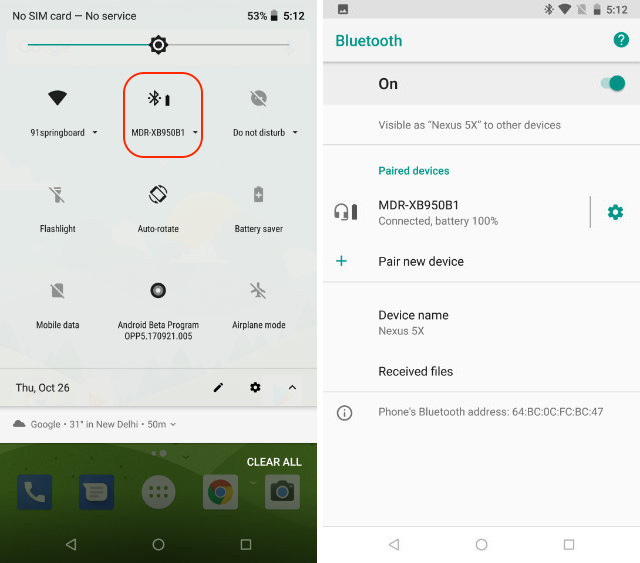 One neat feature that came with Android 8.0 in the new Pixel 2s is the redesigned power menu options. When you long-press on the power-button (on-off button), the power menu slides from the edge of the screen in a card format. Not only the new redesign and the accompanying animations look great, it’s also more functional as it keeps the “Power Off” and the “Restart” option just next to your finger. This means a user doesn’t have to use two hands or fumble with one hand to get to the options. With the developer preview of Android 8.1, the same feature has been ported to all the other supported devices. I also like the fact that automatic light and dark theming also works with the power menu. 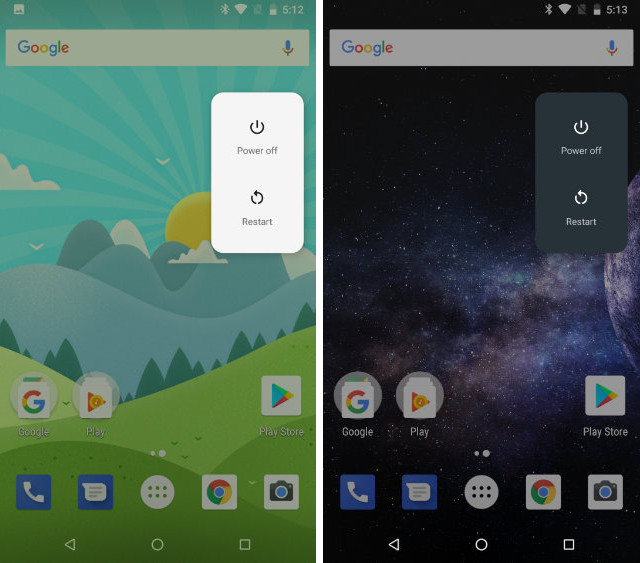 Just like Apple revamps the Control Center with each new iOS release, Google does the same with its settings app. The Settings app that came with the Pixel 2 is probably the best version of it yet. With 8.1 developer preview, Google is bringing the same Settings app with some minor improvements. Now, the search icon which occupied the top-right of the Settings home page covers the whole top bar and looks prominent. Some settings menu items have also been rearranged to make it easier to find them. Also, the navigation bar color changes to match the light theme of the settings menu, with the color of the navigation buttons fading with time if left unused. 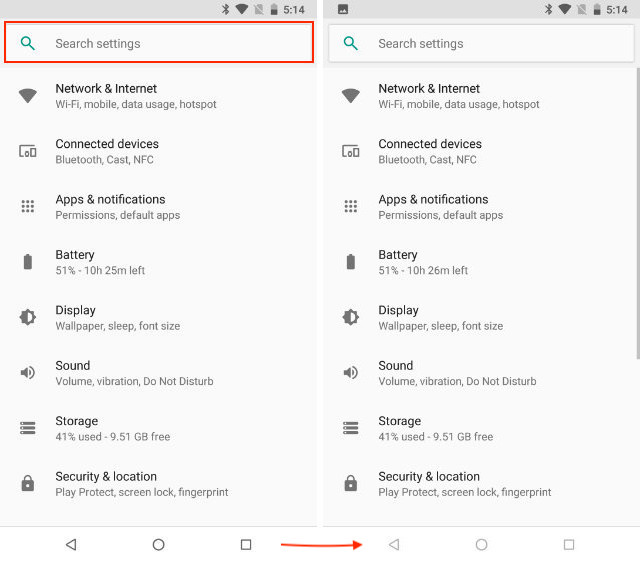 What will a new Android update be without its Easter Egg? With the Android 8.0 launch, Google disappointed many users by not including Oreo as the Easter Egg. Well, the developer preview of 8.1 changes all that by showing Oreo in all its glory. However, the sad looking octopus still remains. 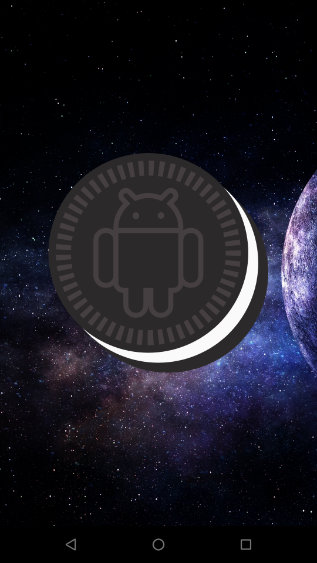 Not all the changes that come with the Android 8.1 Developer Preview are great though. With this update, one of the features which helped in prolonging the battery life has been removed. The “Keep WiFi On During Sleep” option enabled users to command Android to disable the WiFi when the device has been sleeping. This extended the battery life of the device. However, since this feature is no more, you will have to manually disable the WiFi if you want to keep the battery drain in check while your device is sleeping.

7. Apps Can Now Only Make One Notification Alert Per Second

Tell me if you have experienced this. Your smartphone is disconnected from the internet and as soon as you connect it to the internet, all those pending notifications come pouring in at the same time. It is especially annoying if you are a member of any chat group. Well, with the 8.1 update, Google is trying to solve this problem. The documentation that comes with the new developer preview shows that now an app can send only one notification alert per second irrespective of the number of notifications you are receiving. The best part is that the notifications are not lost, you just receive the alert tone one time.

If your memory serves you good, you might remember that with Android 8.0 a new feature was released which showed the apps which were running in the background. The main problem with this notification was that it cannot be removed. With 8.1, the problem has been addressed. Now the notification showing apps running in the background (now displayed as “Apps using Battery”) can be disabled easily. That’s a really good change as the previous persistent notification was quite annoying, to say the least.

Apart from the main Settings app, the Quick Settings panel has also received some minor upgrades. For starters, the new Quick Settings panel now is semi-transparent reflecting the design language of the Pixel 2. The effect works system-wide, giving the UI a uniform design. Also, now the user icon has been removed from the Quick Settings panel, so if you want to switch between users, now you will have to do that from inside the main Settings menu. Depending on how much used that feature, that might be a bad thing for you. Other changes include a subtle increase in the padding of quick setting tiles and more. 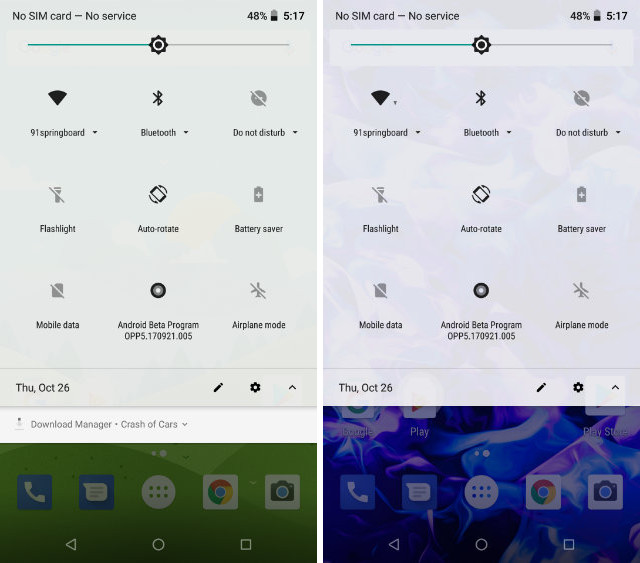 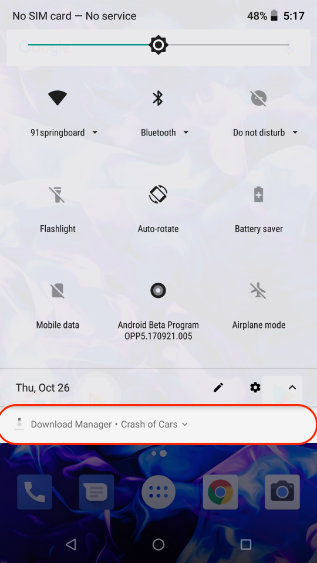 As you can see, there is a lot to love here. It is good to see Google releasing Pixel specific features so soon for other devices. I would still love that new Pixel 2 launcher, but considering the past history, I am not holding my breath for it. That being said, I am very happy with this new update and can’t wait for its public release. Let us know if you are going to wait till December for the public release or are you installing the Developer Preview today.