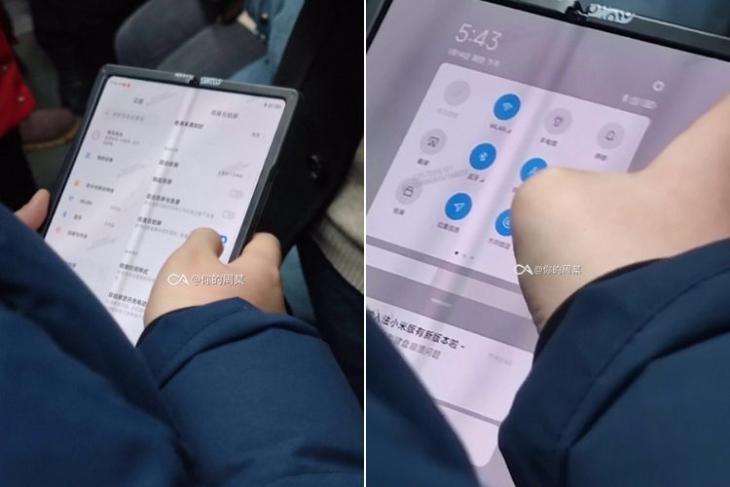 The foldable phone segment is pretty limited at the moment. Though Royole was the first company to launch a foldable phone, Samsung and Motorola have been leading the charge in 2020. Other phone makers have shown off prototypes or concepts, and are yet to officially unveil a foldable smartphone. Xiaomi is known to be working on a foldable phone for quite some time. It even teased a dual-folding phone long ago. But today, a foldable Xiaomi phone has been spotted on the subway in China.

The Chinese giant, as seen in the images, seems to be close to launching a Galaxy Z Fold 2 competitor. Xiaomi’s foldable phone can be unfolded into a tablet to provide you a bigger viewing area. The device seems to be wrapped in a design-concealing case and runs MIUI 12.

Also, if you have not already noticed, the leaked foldable phone here does not seem to have a selfie camera cutout. There’s no lip or punch-hole. It is possible that Xiaomi is going to debut its under-display camera with its first foldable phone sometime later this year. It will be interesting to see the AI algorithms and camera technologies the company uses to enhance the image quality.

Now, there’s still one thing that needs to be addressed in these leaked images. It looks like Xiaomi’s foldable phone will suffer from the same problem as Samsung’s Galaxy Z Fold 2. There appears to be a noticeable crease running down the middle of the foldable display. This was a huge issue with early foldable phones, but Samsung has since made improvements to make the crease appear less prominent.

Judging from the leaked photos, the crease on Xiaomi’s foldable phone seems to be like a small ditch. The foldable display seems to be bending inwards and the area where the phone bends is way more prominent in comparison to Galaxy Z Fold 2 or Huawei Mate Xs. This will be detrimental to the user experience. It wouldn’t want to drop money on a next-gen foldable phone only to feel the crease each time I swipe on the screen.

So, let’s hope Xiaomi can fix this crease problem before it decides to officially bring its first foldable phone to the market. We can expect the company to launch a foldable Mi Mix sometime in 2021.