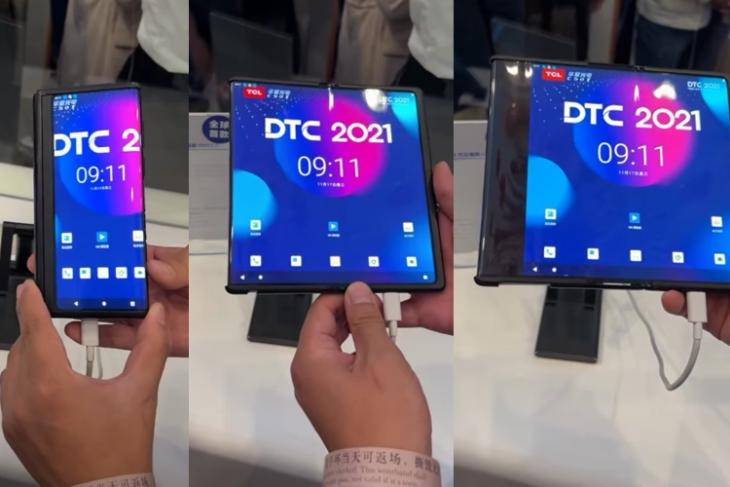 As foldable smartphones continue to gain more traction in the market, various companies are jumping on the bandwagon to launch refined foldable devices. We recently saw Oppo announce the launch of its first-ever foldable device called the Oppo Find N. A few days prior to the announcement, the China-based smartphone brand TCL showcased a unique Fold and Slide smartphone prototype. It comes with a single flexible display and comes with both foldable and rollable capabilities.

The company showcased the “Fold and Slide” smartphone at the DTC 2021 conference, which was recently held in Shenzen, China. Twitter user Fold Universe was able to go hands-on with and film a video of the device. They shared a video of the TCL foldable-cum-rollable phone prototype on YouTube as well as on Twitter. You can check out the tweet, including the video, right below.

As per the video, the TCL Fold and Slide smartphone looks like a traditional foldable smartphone at first glance. However, it has got a trick up its sleeve when it unfolds. So, once you unfold the device, you can press a physical button on the device’s edge to further extend its left part to make it a full-blown tablet device.

The device uses a single flexible display as the outer cover display and the inner display. The cover display measures 6.87-inch, while the unfolded screen measures 8.55 inches. However, if you want more screen real estate, you can extend the screen. When the device slides out, it brings the cover display inward, extending the screen size to up to 10-inch.

Now, although the Fold and Slide smartphone from TCL looks pretty unique and futuristic, it is also worth mentioning that the device is an early prototype, much like the company’s other concept devices showcased earlier. Hence, you will not be able to get it until the company commercially launches the device or something like it in the future. Nonetheless, the Fold and Slide smartphone does look pretty cool and it would be a unique device if launched in the market.

So, what do you think about the futuristic Fold and Slide device from TCL? Let us know your thoughts in the comments below.