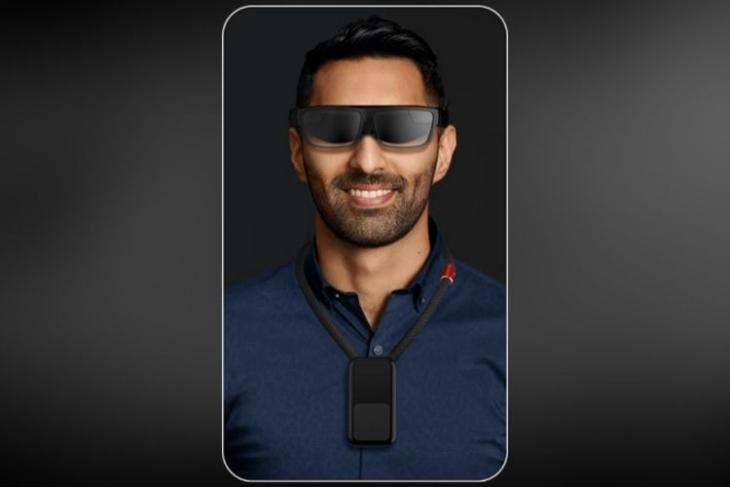 The metaverse hype and the potential of AR/ VR technologies in the market have led numerous companies like Samsung and Apple to work on head-mounted displays. However, Motorola is taking it a step further by announcing a 5G-supported, Snapdragon 8 Gen 1-powered neckband that can help companies building AR/ VR headsets make their products lighter and compact. Let’s take a look at the details.

Motorola Collaborates with Verizon for This 5G Neckband

Motorola recently announced the 5G neckband device for AR/ VR headsets via an official blog post. For the 5G-supported XR neckband, as Motorola calls it, the Lenovo-owned company has partnered with Verizon to use its 5G technology. It is primarily designed so that AR/ VR headset makers can leverage this module to support various tasks of the head-mounted display and reduce the number of components to make them lighter and compact.

The neckband has a generic design and the rectangular 5G module that hangs like a pendant from a chunky magnet-based necklace comes packed with a Snapdragon 8 Gen 1 chipset, a 5,000mAh battery, a touchpad, a SIM slot, and a charging indicator. It also features various sensors like a gyroscope, barometer, accelerometer, GPS, and of course, 5G antennas. It is reportedly compatible with Snapdragon’s VR platform, Microsoft’s Remote Network Driver Interface, and comes with a USB-C port and a DP1.4 port.

The 5G XR neckband is shown to be paired with a Lenovo’s ThinkReality A3 headset in the official images. However, the company says that it is designed to work with other glasses too. In a statement, Verizon’s VP of device technology Brian Mecum highlighted that the wearable 5G neckband can be potentially used for “sports training and fan experiences, as well as making VR theaters scalable.”

“We’re making 5G wearable,” Mecum told Engadget. So, AR/ VR headset makers like Oculus or Lenovo could get rid of the heavy-duty components from their headsets and leverage the 5G neckband, making it lighter and more user-friendly. With Motorola’s 5G neckband, future AR/ VR headsets could become more like traditional glasses instead of these chunky wearable devices that protrude outward. That said, we would still admit that it looks rather hideous and there’s no word on how feasible it is.

Coming to the pricing and availability of the wearable 5G neckband, Motorola and Verizon have kept it under wraps as of now. However, Mecum said they are currently in talks with partners in the retail space, sports leagues, and the education sector to launch the device in the market. We will let you know once more details are out.

What do you think about Motorola’s new 5G neckband? Let us know your thoughts in the comments below.