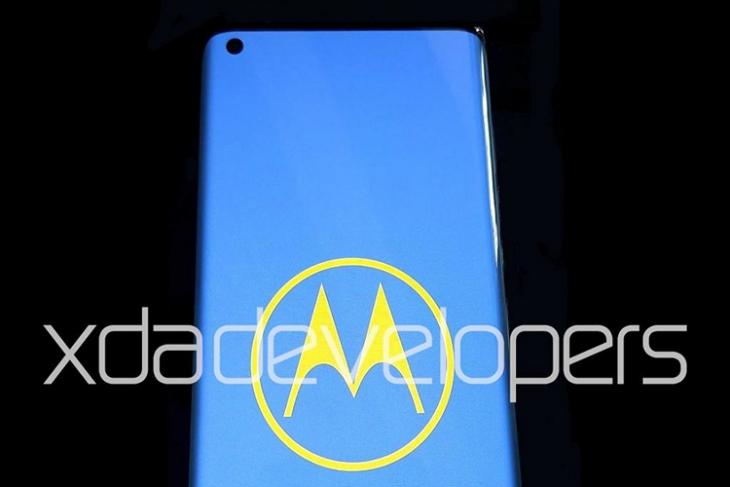 Last week, Motorola confirmed its plans to attend and launch a flagship device, alongside other devices, at MWC 2020. While we know almost everything about the Moto G Stylus, one of the devices the Lenovo-owned company will be showcasing at MWC, not much was known regarding their flagship device – the Motorola Edge Plus/ Motorola One 2020 other than a Geekbench listing. Today, a new report from XDA Developers shows the live images of the Motorola One 5G 2020 along with a few key details.

The report suggests that Motorola could be launching two high-end handsets, one of which is the alleged Motorola Edge Plus/ Motorola One 2020 while the other is possibly Motorola One 5G 2020. The images show the device featuring a waterfall display that is usually seen on offerings from Chinese brands like the Vivo Nex 3 5G and Huawei Mate 30 Pro.

The selfie camera is placed inside a punch-hole in the top-left corner of the device, as you can see in the image attached above. According to the report, both of these handsets will come with a 6.67-inch waterfall display (2340×1080 pixel) with a 90Hz refresh rate. If this turns out to be true, this would be the first Motorola phone to ship with a high refresh rate display. It remains uncertain if the panels used in these devices are AMOLED or LCD.

Under the hood, the flagship device will come with Snapdragon 865 chipset coupled with 8/12GB of RAM, 5170mAh battery while the other handset is expected to be powered by a Snapdragon 765 or Snapdragon 765G. Both the handsets are rumored to come with 5G connectivity, but Motorola could launch the flagship variant without 5G in certain regions, judging by the omission of 5G in the name.

In addition, the report sheds light on the software applications Motorola will probably add to these devices. Moto Edge Assistant, Moto Gametime, and Moto Audio are the 3 alleged apps that we might see on these handsets.

According to the report, the Moto Edge Assistant app will be used to define custom tap actions on the edges of the display. Moto Gametime will be used to enhance the gaming experience by blocking incoming calls or notifications while Moto Audio will be an audio-tuning app to tweak audio profiles.

We would recommend you to take these leaks with a pinch of salt and wait for the event that is merely a few weeks away from now.