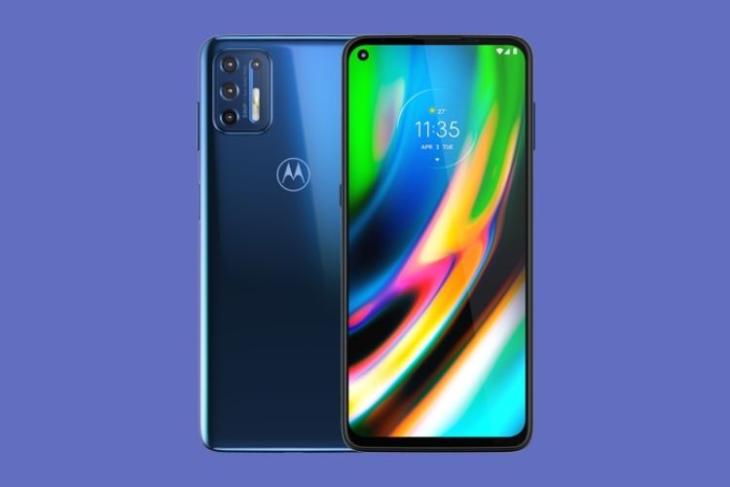 Motorola recently unveiled the Moto G9 in India a couple of weeks ago. It includes the Snapdragon 662 SoC and a 48MP triple camera system. The company is also known to debut a Plus variant of its G-series phones each year. The Moto G9, a successor to last year’s Moto G8 Plus, seems to be around the corner as its complete specs and renders have leaked online over the weekend.

First spotted by reputed tipster Roland Quandt, the official listing of the Moto G9 Plus has gone live prematurely on the Orange Slovakia website. It reveals most of the specs of the upcoming device, including the punch-hole-laden display on the front and the rectangular quad-camera cutout on the rear. You also get a side-mounted capacitive fingerprint sensor that doubles as the power button.

The listing shows off the blue colorway and Evan Blass (popularly known as @evleaks) shared a Moto G9 Plus Rose Gold render on his Patreon last month. The device weighs a hefty 233 grams and is also thicker than the standard G9, with its dimensions being 170.0 x 78.1 x 9.7mm.

The smartphone also sports a 64MP primary sensor, along with an ultra-wide lens, a macro, and a depth sensor on the rear. You have a huge 5,000mAh battery onboard with fast-charging support, which is said to offer up to 30W charging speeds as per the FCC listing.

While the listing reveals almost the entire specs sheet of the Moto G9 Plus, we still do not know the chipset under the hood. It’s rumored to be powered by the Snapdragon 730G chipset — the same as the upcoming Galaxy M51 and already available Realme X2 in India. We are also not aware of the exact selfie and rear camera details, so keep an eye out for the official announcement.

As for the pricing, Moto G9 Plus has been listed at 235 euros (~Rs. 20,399) and that’s only 35 euros more than the standard Moto G9. There is currently no official word on when the smartphone will be launched and whether it will find its way to India or not.