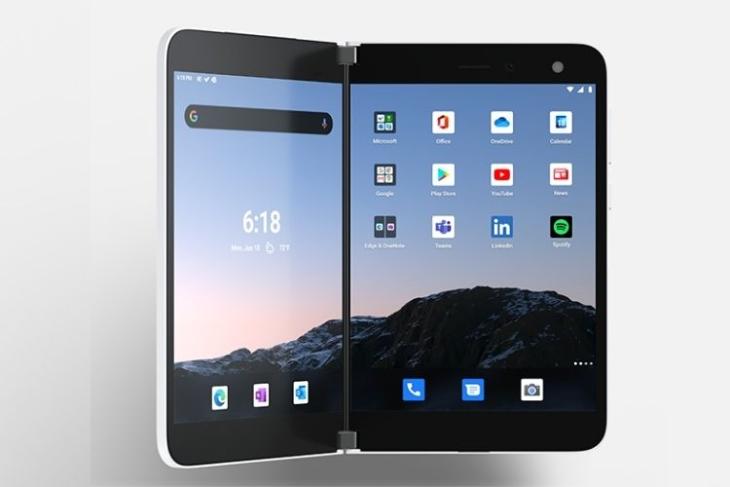 Microsoft first revealed that it’s making an Android phone, that too a dual-screen one, at its Surface hardware event earlier last year. Now, after teasing the device on social media over the past few weeks, Microsoft today officially launched the much-awaited Surface Duo. It comes with an exorbitant $1,399 (~Rs. 1,04,999) price tag and will go on sale starting from 10th September.

The Redmond giant initially planned on launching the Surface Duo at the end of this year, during the holiday season. It seems to have rushed the launch though to deliver what it believes to be the next-gen ‘mobile productivity’ experience.

“Surface Duo delivers the easiest way to multitask on the go, bringing together the power of Microsoft 365 experiences and the full ecosystem of Android mobile apps,” says Microsoft in an official blog post. The company only shared bits of specification and features info in the blog post, but we already have a good idea about it.

The highlight of the Surface Duo is the two 5.6-inch screens, which are connected by a 360-degree hinge. These are AMOLED panels with a 4:3 aspect ratio and 1800 x 1350-pixels resolution. You can obviously see the huge bezels at the top and bottom of these displays.

When opened, the Surface Duo offers you an 8.1-inch ‘PixelSense Fusion display’ with a 3:2 aspect ratio and 2700 x 1800-pixels resolution. Microsoft boasts that the device is merely 4.8mm thick when opened, making it the thinnest Surface device to date. It does weigh more, around 250 grams, in comparison to traditional phones. 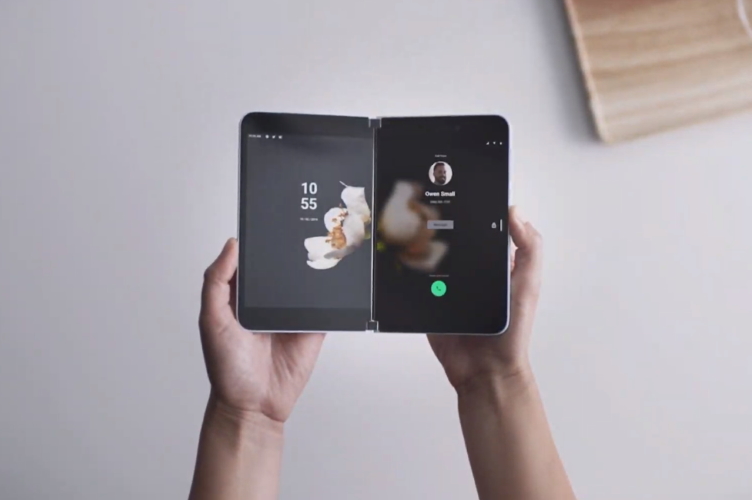 The Surface Duo looks absolutely stunning and minimal in its closed state. There’s no cameras on the outside to the mar the ‘Glacier White’ surface (pun intended!). You’ve only got a single 11MP sensor above the display on the right. The 360-degree hinge is going to enable you to use it as both the rear and selfie camera.

Under the hood, this device is powered by last year’s Snapdragon 855 chipset (not even the Snapdragon 865) and includes 6GB RAM, up to 256GB built-in storage, and a 3,577mAh battery pack with 18W fast-charging support. Microsoft is yet to confirm the internal specs but we will double-check it when they are released and update the article to reflect any changes.

As for the software experience, Surface Duo runs Android 10 out-of-the-box but it has been tweaked to meet the needs of the dual-screen experience. It has the Microsoft launcher on top, along with exclusive features such as running two apps side-by-side, expanding apps to use the two screens, and gestures to quickly move apps between the two screens. You can read our hands-on with the Surface Duo emulator right here.

While Surface Duo offers you a customized dual-screen foldable phone experience, it comes with a really steep price tag. Some might say that the price is comparable to or less than other foldable phones in the market, such as Galaxy Z Flip and Galaxy Fold. We, however, need to keep in mind that Samsung is using a foldable AMOLED screen instead of simply connecting two separate displays with a hinge.

You can say we are undermining the Surface Duo but one can get a 360-degree dual-screen folding experience with the LG Velvet for around $800 in the US. At the end of the day, we will reserve our judgment until we have the product in hand. It is then we will let you know whether it’s worth the $1400 price tag or should you buy Samsung’s Galaxy Z Flip instead? Stay tuned for more information.