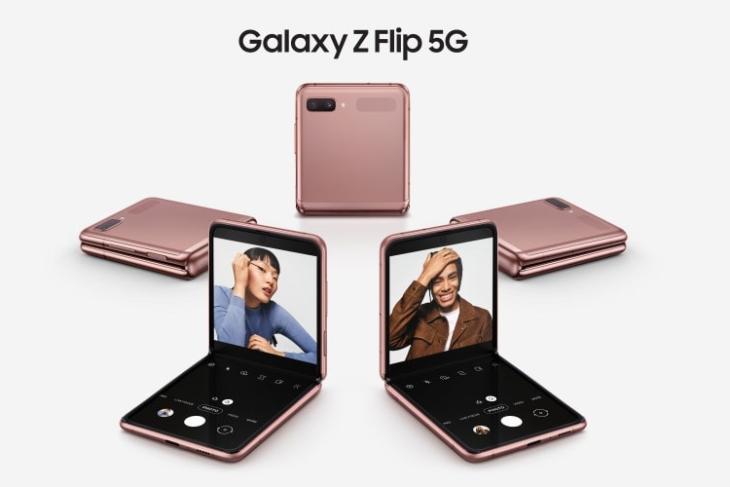 If you’ve been keeping up, you would know that Samsung was rumored to be working on a 5G variant of its clamshell-style foldable phone, the Galaxy Z Flip. We even saw renders and specs leaks over the past couple of months. And today, a couple of weeks ahead of its next Galaxy Unpacked event, Galaxy Z Flip 5G has been made official. It’s only a minor upgrade over the original, bringing a new chipset and 5G support to the foldable device.

Starting off with the design, the Galaxy Z Flip 5G looks identical to the original 4G variant. The company has not made any major changes on the design front. The only differentiator between the 4G and 5G variant is the new color variants.

Galaxy Z Flip 5G comes in new Mystic Bronze and Mystic Gray colorways. Though I would still pick the Purple Haze color variant other these any day.

The biggest upgrade can be found under the hood. The original Galaxy Z Flip made its debut alongside the Galaxy S20 flagship series earlier this year. But, it was powered by last year’s Snapdragon 855+ chipset. Samsung has now given the clamshell foldable phone a new life with the powerful new Snapdragon 865+ chipset.

Galaxy Z Flip 5G is the first Snapdragon 865+ powered phone in Samsung’s portfolio. It was expected to be the Galaxy Note 20 series but the Z Flip 5G beat the flagships to the punch. Snapdragon 865+, for those unaware, is a slightly overclocked version of Qualcomm’s flagship 865 chipset. It brings 10% performance gains both on the CPU and GPU front. The biggest

The biggest benefit of using the Snapdragon 865+ onboard here will have to be the 5G connectivity support. Samsung has also made a slew of improvements on the software front. You now have an improved Flex Mode for switching the position of the viewfinder, watching videos on YouTube. Multi-tasking features, such as App Pair and Multi-window Tray are also part of this refresh.

As for the other specifications, the 6.7-inch Full-HD+ AMOLED foldable display on the inside and tiny 1.1-inch OLED display on the outside is exactly the same. Even the camera system remains unchanged. You have a dual-camera system on the outside, with a 12MP (f/1.8) primary and a 12MP (f/2.2) ultra-wide-angle lens. There’s a 10MP selfie camera housed in a punch-hole on the inside.

The Galaxy Z Flip 5G has been priced at $1,449 (around Rs. 1,08,099) in the US and will go on sale starting from 7th August. This variant will most likely not make its way to India as Samsung doesn’t seem to be ready to bring 5G phones to the country just yet. The Galaxy S20 series landed with 4G connectivity in tow earlier this year.