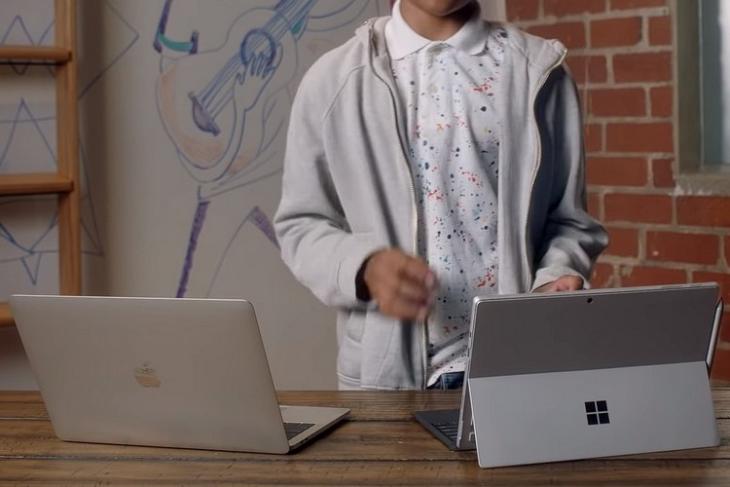 Microsoft, in a recent promotional video, is encouraging consumers to get the Surface Pro 7 over Apple’s new M1-powered MacBook Pro devices. Why, you ask? Well, as per Microsoft, it is “the better choice”.

So, the Redmond-based software giant, after losing to Sony with its next-gen gaming console, has now released an ad dubbed “Microsoft Surface Pro 7: The Better Choice” on YouTube. In the advert, a kid compares the Surface Pro 7 with a high-end MacBook Pro side-by-side.

As per the kid in the video, Microsoft’s Surface Pro 7 comes with a pen and full-area touchscreen, while Apple only offers a “little bar” on its device. Moving forward, the ad highlights the fact that the Surface Pro 7 has a detachable keyboard and can essentially become a tablet on-demand. The MacBook Pro, on the other hand, comes as one single device with a non-detachable keyboard. As a result, “you are kind of stuck with what you got”.

Now, it is surprising to see that Microsoft focused on the physical aspect more rather than going into the tech-specs of the devices. Other than claiming that the Surface Pro 7 “has the power to run all your apps” and touting it as a “much better gaming device” than the MacBook, there is little information about the internals of both devices.

However, we have already seen the power and performance of the latest M1-powered MacBook Pro devices (they can even run Microsoft’s own OS better than the Surface devices). Coming to app compatibility, it is true that the new M1-powered Macs come with some app compatibility issues as previous apps were designed for Intel’s x86 architecture. Nonetheless, you can always use Apple’s Rosetta software to run Intel-based apps on your M1 Macs. Moreover, it is just a matter of time until all your favorite Mac apps start supporting the new Apple silicon.

Lastly, Microsoft compares the prices of both the devices, and as you can guess, Apple’s MacBook Pro came out as the pricier choice. The Surface Pro 7 starts from $749.99 for the 4GB RAM and 128GB storage option. While the starting price of the 8GB RAM with 256GB internal storage variant of the M1 MacBook Pro is $1,299. The top models of both devices are similarly priced at $2,299. However, at this price, Apple offers 2TB of on-board memory with 16GB of unified RAM compared to Surface Pro 7’s 1TB of storage and 16GB of RAM.