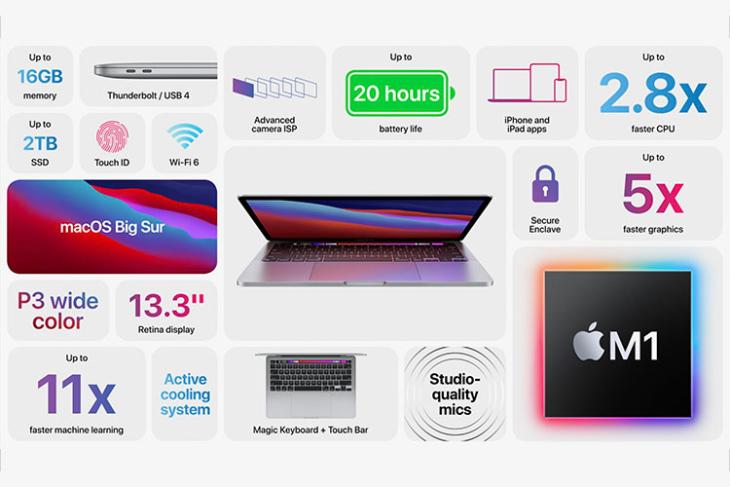 Apple is claiming that the M1 processor performs up to 2.8 times faster in terms of CPU performance, and 5 times faster in GPU performance when compared to the last generation MacBook Pro. And, the company is saying that the new MacBook Pro can playback 8K ProRes footage in DaVinci Resolve without dropping a single frame — that sounds incredible, I’m sure our video team is hyped already.

Along with that, you can configure the MacBook Pro with up to 16GB RAM and up to a 2TB SSD.

The laptop still comes with the same Thunderbolt ports, with USB 4 support this time, and the studio quality three mic array that we also saw in the previous generation of the MacBook Pro.

Similar to the MacBook Pro, the FaceTime HD camera is getting improvements thanks to the new ISP in the M1 chip. You get better noise reduction, greater dynamic range, and face detection as well.

In terms of battery life, obviously there are improvements thanks to the new M1 chip. Apple is claiming that the MacBook Pro offers 17 hours of web browsing and 20 hours of video playback. That’s quite impressive when compared to the battery life claimed for the previous generation MacBook Pro.

The new MacBook Pro with M1 processor is priced at $1299, but education users can get it for $1199. The laptop can be pre-ordered right away, and will go on sale this Thursday.