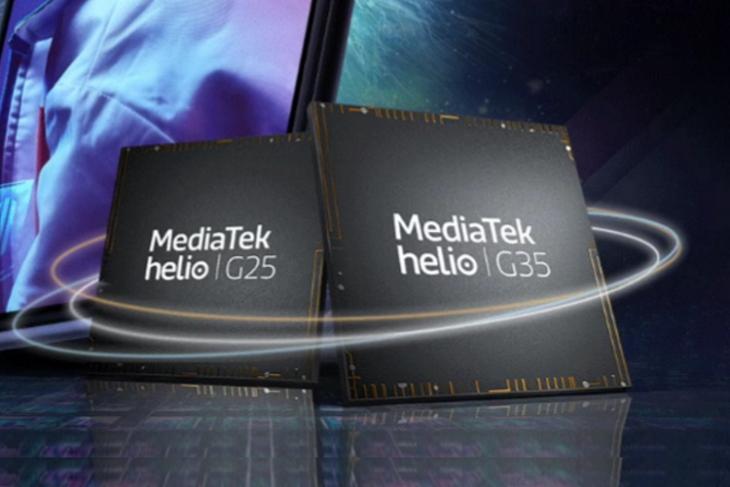 MediaTek today unveiled two new chipsets under its popular gaming-centric G-series, namely the Helio G35 and Helio G25. It’s not only the chipsets, we also saw the launch of three new phones, i.e the Realme C11, Redmi 9A, and Redmi 9C, today powered by the said chipsets. We have already talked about them in separate articles. And as you might be able to tell from the title, we’re here to discuss how MediaTek Helio G35 is essentially not a brand new chipset.

The Helio G35 arrives as an octa-core chipset based on the 12nm FinFET production process. It is backed by the ARM Cortex-A53 CPU clocked up to 2.3GHz and the IMG PowerVR GE8320 GPU clocked at 680MHz. Sounds powerful, right? Now, are you aware of the specifications of MediaTek Helio P35 SoC? It’s a mid-range chipset that made its debut earlier last year and is found in phones from Motorola and Oppo.

Well, to my surprise (and soon yours as well), Helio G35 has almost exactly the same hardware specifications as the Helio P35. You can take a peek at the specs sheet for these chipsets attached below:

So, do you notice any difference in any of the sections above? There isn’t any and we haven’t made any error is listing the specs. All of the aforementioned specs have been double-checked with the official MediaTek website. You can take a peek at the Helio G35 and Helio P35 specs sheet for yourself. I’m also attaching specs sheet screenshots for your convenience down below:

If that isn’t proof enough for you, I did some digging to find out the Geekbench score for both of these chipsets. These scores only go on to throw any doubt that I had out the window. It is because the chipset found aboard the Realme C11 (model RMX2185) is the MT6765V/CB (or MT6765G in a more recent test). And if you perform a quick Google search for ‘MediaTek Helio P35 name’ then you will be greeted with the same name for the chipset as Helio G35.

You can check out the Geekbench scores for the Helio P35 vs Helio G35 right here. It’s pretty much the same.

This essentially confirms that Helio G35 is a rebadged Helio P35 in terms of hardware specifications. The only major difference that I could see between the two is that Helio G35 supports MediaTek HyperEngine technology. The chipmaker defines it as an “intelligent resource management system that will ensure sustained performance and longer gameplay.” That’s just it. It’s not a dedicated NPU or anything that would make the Helio G35 more competent or capable over the year-old Helio P35.

I hate to break it you but Helio G25 is also a rebranded P-series chipset with the same HyperEngine technology fluff on top to pass it off as a brand new chipset. Helio G25 is a rebadged Helio P22 that comes baked into a slew of budget phones from Oppo and Vivo.

Just like the Helio G35, I have compared the specs for the Helio G25 against the Helio P22. You can see in the table attached below that almost every specification of the two chipsets is almost exactly the same. Right from the CPU cores and GPU to the display and camera support for these MediaTek chipsets.

Again, all of the aforementioned specs have been verified from the official MediaTek website. You can take a peek at the official specs of the Helio G25 and Helio P22 for yourself if you want to double-check the specs.

I stumbled upon this comparison by chance. I was looking to compare Helio G35 and Helio G25 to other equally capable chipsets when I saw the Helio P35 boasts the same hardware specs as Helio G35. It was quite a shocker. So, I went looking for the chipset that had been rebranded to the Helio G25 and came across the widely-used Helio P22. You have already seen how the core specs for these chipsets are exactly the same.

The moment I discovered that the Helio G35 and Helio G25 essentially appear to be a rebadged version of older chipsets I decided to look back on the specs of the entire G-series to see if MediaTek has done the same and passed it off as a new chipset of recent. However, you can rest assured that the specifications of the Helio G90, G80, and G70 are not completely identical to any other chipset in MediaTek’s portfolio.

The first gaming-centric MediaTek chipset, the Helio G90T has “proven its might” in the budget segment. It is baked in the Redmi Note 8 Pro and Realme 6, both of which are pretty capable phones. Now, the chipmaker appears to be banking on this hype and is looking to emulate the same results in the entry-level segment.

However, it seems like MediaTek is duping customers – possibly offering a rebadged chipset at lower rates to phone makers and adding a dash of marketing mumbo-jumbo in the form of the variety of add-on technologies, including the MediaTek Hyperengine technology, to make it more acceptable to users. We have reached out to MediaTek for a detailed specs comparison and info on what value do the new G-series chipsets, Helio G25 and Helio G35, offer over its existing P-series chipsets.

Jio Tablet and Smart TV Could Launch in India Next Year