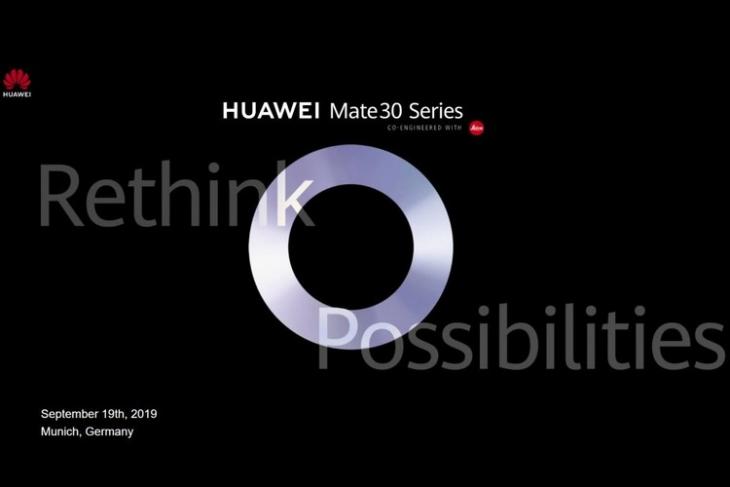 Huawei has confirmed that the next installment in its flagship phablet lineup will be unveiled September 19th at an event in Berlin, Germany. In a tweet posted by the official Huawei Mobile account on Sunday, the company not only announced the launch date for the Mate 30 and Mate 30 Pro, but seemingly also reinforced earlier rumors about a circular camera module by posting the image of a giant ‘O’ with a statement that claimed the phone will ‘go the full circle’.

Did you get it right? The countdown to #HuaweiMate30 starts now!
We're going full circle in Munich on 19.09.2019.
Join us live: https://t.co/9ugi5gG9ci#RethinkPossibilities pic.twitter.com/etRYjrBVEC

The launch of the Mate 30 has been shrouded by speculations over whether it will have access to Google’s myriad apps and services, many of which are critical to the success of Android phones outside of China. The uncertainly arises out of Google’s recent statement, which claimed that the temporary relief offered to Huawei by the US government doesn’t extend to upcoming releases, including the Mate 30, which means the device might launch without the Play Store and Play services.

As you might recall, the US granted Huawei a 3 month exemption after initially barring US companies from doing business with Chinese firms as part of an ongoing trade war between the two countries. While the initial exemption ended in August, Huawei has since been granted a new license that lasts till November 19, but that only covers previously released phones and no new devices.

While an Android smartphone without Google Play services will be a tough sell outside China, Huawei is unlikely to use its newly-announced HongMeng OS to power the Mate 30 lineup, given that the software is still likely a work-in-progress. What’s more, Huawei has continued to officially deny that HongMeng is meant for smartphones, although, persistent rumors have claimed that the the company will launch its first smartphone powered by the new software during the fourth quarter of this year.