Not too long ago, Apps could access Bluetooth on your iPhone without any restriction what-so-ever. And that too without asking for your permission or keeping you in the know! When the concern over companies tracking the location of users over Bluetooth by using beacons in shopping malls and stores became louder, Apple introduced an effective privacy feature to let users manage third-party app access to Bluetooth on iPhone and iPad in iOS 13/iPadOS 13 or later.

Control Third-Party App Access to Bluetooth on iPhone and iPad

Why Apple Implemented Bluetooth Management on iPhone and iPad

As mentioned above, apps had complete freedom to access the Bluetooth of the iPhone without any limitation and the need for approval from a user. But when Bluetooth “tracking beacons” at stores, public locations, and shopping malls became common, and several sensational reports revealed how companies misused Bluetooth to track users location secretly, Apple eventually decided to “shut the door on the abuse” with an emphatic announcement at WWDC 2019.

With this much-needed privacy feature coming into effect in iOS 13, an app must ask for your permission to access the Bluetooth of your device – just the way it has to take the approval for tracking, local network, location, camera, and microphone.

More importantly, you can now revoke the third-party access to Bluetooth on your device on your terms. 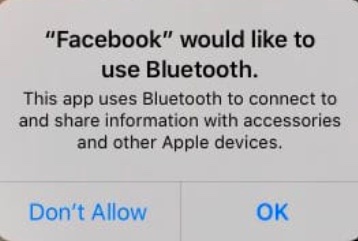 If you find the reason valid enough, you can hit OK to let an app use your Bluetooth. Just in case you aren’t pleased with the reason or find it obscure, you can simply hit the “Don’t Allow” option in the popup to shut the door. Fortunately, it’s all in your hands now!

Enable or Disable Bluetooth for Apps on iOS and iPadOS

1. On your iPhone or iPad, launch Settings app.

4. On this screen, you should a list of all the apps which have accessed the Bluetooth on your device. Simply, turn off the switch next to an app which you no longer want to use Bluetooth of your device. 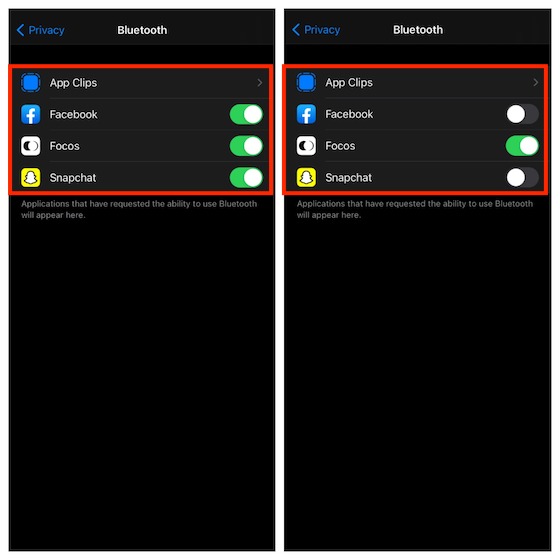 In the end, quit the Settings. Whatever changes you make will come into effect immediately.

Control Apps’ Access to Bluetooth on Your Device with Ease

So, that’s how you can prevent any app from misusing the Bluetooth of your device. Now that you know the truth behind why Apple had to bring it on iOS, make sure to get the most out of it to enhance security and privacy.

The Cupertino-based company has vastly improved privacy in iOS 14. Features like limiting third-party access to Photos and preventing apps from having access to your precise location are some of the notable additions. What’s your view about them? Do share it with us.