Listening to music is a way of life for many people and choosing a good music app these days is a hard task due to the plethora of solid players out there. If you’re a Linux user, there are chances that you, like myself, have gone through the process of finding the perfect music player app for your needs (I bet you have, or you wouldn’t be reading this article). We have pored through most of the music player apps available out there and selected the best of the lot.

Here are 10 awesome music apps for Linux in no particular order: 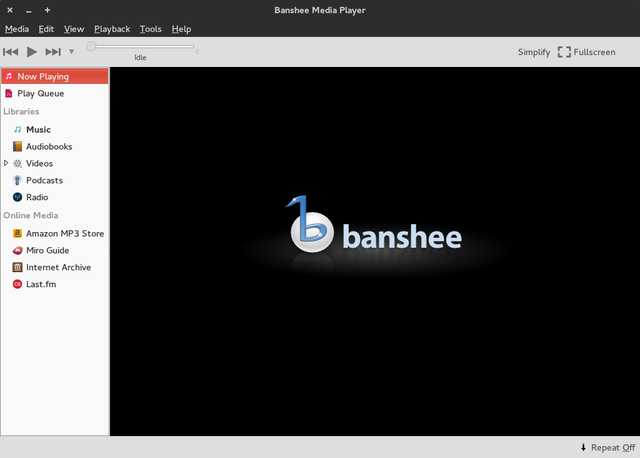 Banshee is a cross-platform media player for Linux, Windows and Mac OS X. It can do audio, video, internet radio, podcasts, and it can even rip DVDs. It also supports many portable media players such as android devices, iPhone and iPod support as well as ZEN players. You can play music from a bunch of online media such as Amazon, Miro Guide and Last.fm. You can also listen to audiobooks with this app. 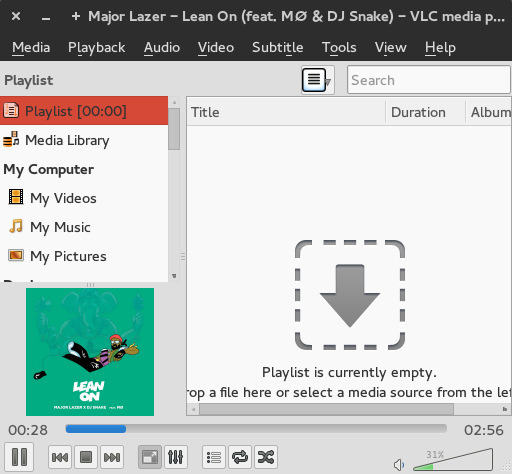 VLC is one of the most well known cross-platform media players in the world. It’s mostly used for video playback but can double as a music player and it has got some features for organising your music collection. While it’s interface is a bit boring, you get all the standard features of a music player and it has the widest collection of multimedia codecs so it can play almost any format of audio. There are additional settings for audio filters or effects and numerous plugins you can download to enhance your experience.

What’s more, you can listen to online media such as internet radio and podcasts which includes a discovery feature to help you find and subscribe to new shows. 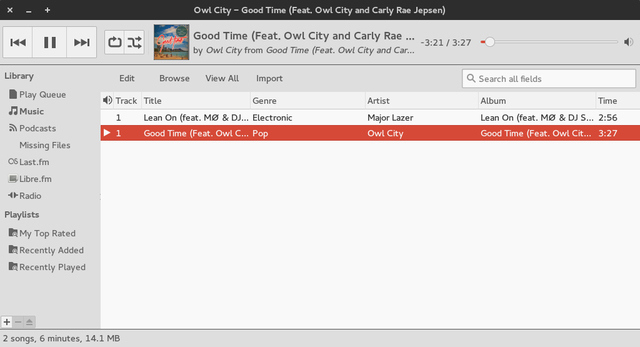 Ubuntu 15.04’s default music player is a widely used application and is commonly found along with the popular Gnome Desktop Environment. It has a simple interface and will automatically populate the music files in your music folder but you can also import music or existing playlists from other folders you’d like Rhythmbox to look through. Podcasts and internet radio are well supported as well as other third-party services such as Libre(.)fm and Last(.)fm. 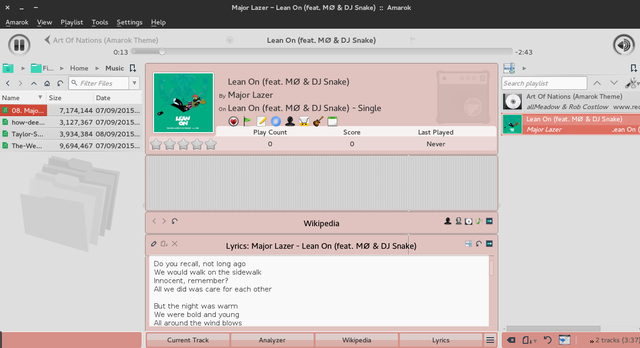 KDE’s default music app has been around for more than a decade and is one of the most revered music players available for Linux. It has a very strange default look different from many other audio players but it’s pretty configurable so you can always edit it and make it your own. Amarok’s power is in it’s plugins and there’s a mighty bunch of them available on the internet. There is an integrated Wikipedia search embedded in the application which displays the lyrics of the song you’re listening to and the artist if it’s available. The integration with KDE is quite huge so you’re probably going to enjoy it best if you’re running KDE. 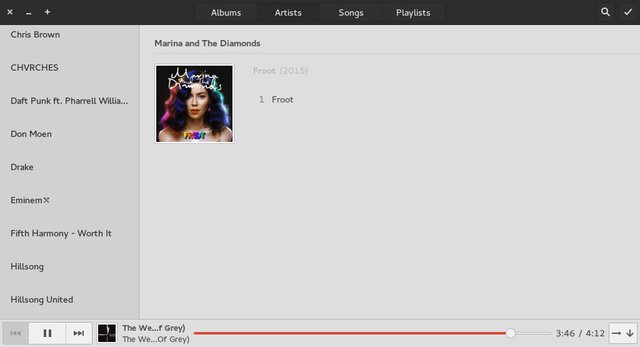 Gnome Music is a relatively new app compared to the others on this list and specifically designed for the Gnome Desktop Environment. It offers a minimalistic experience with only the most basic features. By default, it shows the album covers (if available) for the music files found in your music library. There are other tabs for artists, songs and playlists. You have some predefined “smart” playlists which categorises your music based on their frequency of playback or most recently added ones. If you want a simple lightweight music application integrated with Gnome, you’re going to love this one. 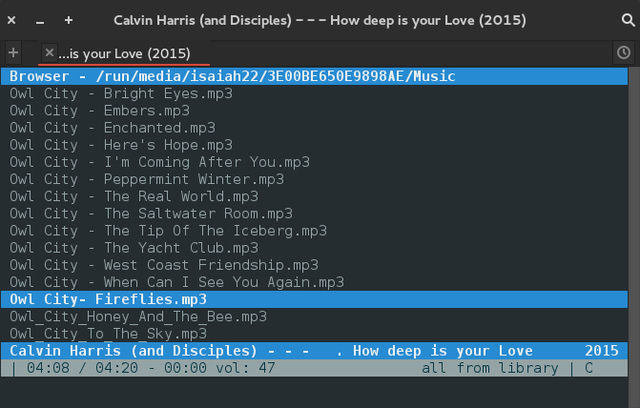 Cmus is a terminal-based music player that will thrill lovers of the command line. While it’s not the only console based player around, it’s one of the best and has a strong set of features. It supports common audio formats such as MP3, OGG, WMA, MPEG, WAV, FLAC and more and. It also supports streaming from Shoutcast or Lastcast. It’s really fast to setup and start using and is ideal for systems with low memory. On my computer it took only 5 MB of RAM for mp3 playback. 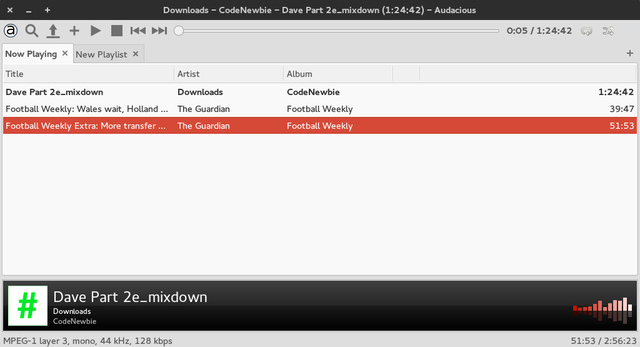 Audacious is a simple lightweight music player with the most basic options. It simply plays your already downloaded music on your hard drive and does nothing else. It does not connect to online stores where you can download new music and there are no internet radio stations. You can easily import your music or playlists into the player and integration with popular desktop environments such as Gnome and Cinnamon is good. If you’re looking for a lightweight GUI player that simply plays your music and gets out of the way, then audacious may be the best for the job.

Install on Ubuntu and derivatives: 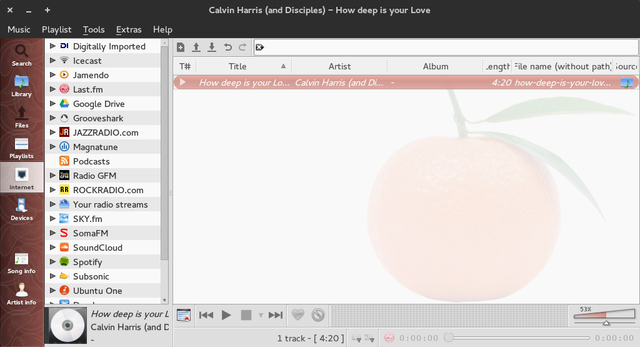 Clementine is a fork of Amarok 1.4 but has a lot less dependencies and is also ideal for sytems without a lot of RAM to spare. In addition to the usual features you would expect from a music player, it has a massive support for online media from SoundCloud, Sky(.)fm, Jazzradio, Spotify,and more as well as cloud storage services such as Onedrive, Google Drive and Box. For advanced users, there is a format conversion tool that turns converts audio tracks to MP4, MP3, OGG (Flac, Vorbis, or Opus), FLAC, WAV and WMA. You can also change the bit rate and other parameters. 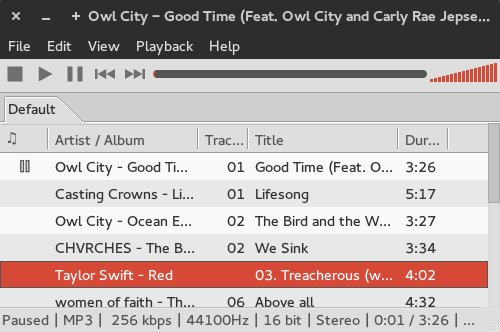 Despite it’s odd name, DeaDBeef is a fairly solid music player application without any Gnome or KDE dependencies cue a la Gnome Music or Amarok. It supports all the popular audio formats such as MP3, OGG, FLAC, M4A and more. You can also play music from CDs or add stream podcasts in MP3 or AAC formats. Some other useful features are customizable playlists, metadata editor, plugin support, and playback control from command line.

Lollypop is another Gnome Music player which is largely inspired by Gnome Music. It’s the newest on this list and therefore only has basic features at the moment but looks very promising. It can do MP3, OGG and Flac pretty well and download album covers for your music files. It also features a party mode and has a wonderful search feature which you can use to locate all your songs and add them to queue or a playlist. In addition, you can synchronize music with your android device from this app.

Above mentioned Linux music player apps are all free so you can install more than one and decide which one works for you. If we left out your favourite app, do let us know in the comments section below.

South Korea Will Start Switching to Linux from this Year

How to Run GUI-based Linux Programs on Windows 10