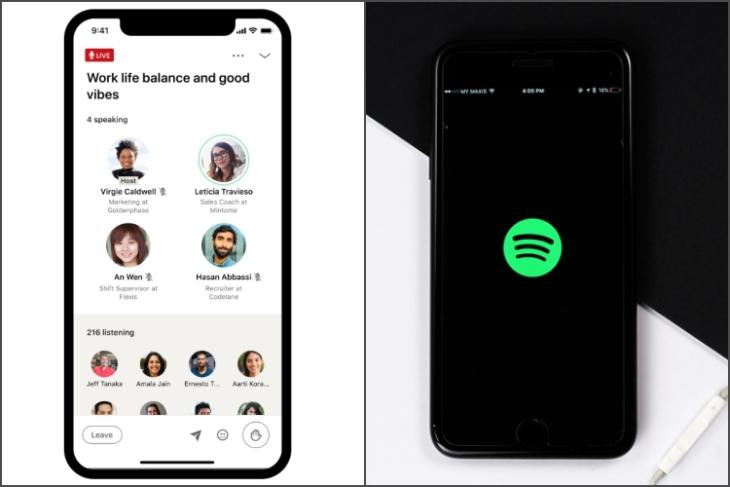 After the massive popularity of the audio-based social networking app Clubhouse, we have seen many tech companies work on a similar feature for their platforms. So, after Facebook, Twitter, Instagram, and Telegram, LinkedIn and Spotify have announced their plans to jump on the Clubhouse-clone-bandwagon.

As per a recent report by Techcrunch, LinkedIn has confirmed that it is working on a Clubhouse-like feature for its platform. The company reportedly said that it came up with an audio-based networking feature as its user-base has been demanding more ways to communicate. As a result, LinkedIn recently launched a new “Creator Mode” that lets users set their profiles to be followed for social features like Stories and LinkedIn Live videos.

Now, as per initial screenshots acquired by reverse app engineer Alessandro Paluzzi, the feature will work like any other Clubhouse-clone. There will be a room with the speakers displayed on top and the listeners right below them. The listeners will be able to react to comments, request to speak, or leave the audio-room altogether. You can check out an official mockup of the UI acquired by Techcrunch right below.

The feature is currently in its initial stages and LinkedIn aims to start beta testing it soon. However, the company does not have an exact timeframe for the public launch as of now.

Apart from LinkedIn, Spotify is also aiming to develop a similar audio room feature. The company recently acquired Betty Labs, the creators of Locker Room, which is a live audio-based networking app for sports fans.

Spotify confirmed the acquisition via an official press release and said that “this acquisition builds on our work to create the future formats of audio and will accelerate Spotify’s entry into the live audio space.”

The company mentions that it will revamp the Locker Room app to turn it into an “enhanced live audio experience for a wider range of creators and fans”. It will also offer “a range of sports, music, and cultural programming, as well as a host of interactive features that enables creators to connect with audiences in real-time.”

So, with so many companies already trying to capitalize on the new audio-format, the original Clubhouse app is surely in for some intense competition in the coming days.