The nation’s second-largest cellular operator, Reliance Jio, on Monday launched four new all-in-one plans to clear some of the confusion regarding Interconnect Usage Charges (IUC) following the company’s announcement earlier this month. The prepaid plans, worth Rs. 222, Rs. 333, Rs. 444 and Rs. 555, are already listed on the company’s official website, and are also being offered on the MyJio app.

As can be seen in the screenshots below, the three cheaper plans will offer 2GB of high-speed data per day, alongside unlimited on-net (Jio-toJio) voice calling and 100 daily SMSes, alongside 1000 minutes of off-net voice calls. The only difference between them lies in the validity period. While the first one is valid for 28 days, the other two are valid for 56 and 84 days, respectively. 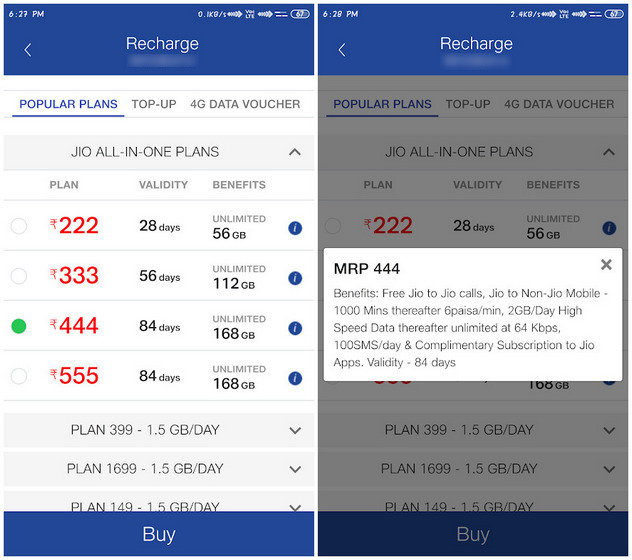 The Rs. 555 plan, meanwhile, will also be valid for 84 days, but will offer 3000 minutes of off-net calling alongside the same data, SMS and on-net benefits as the other plans. According to the company, users on the 2GB plans are actually getting to save a few bucks with the new plans when compared to what they were paying for their service thus far, provided, of course, their off-net calling is not off the charts.

In case you don’t know it already, Jio recently decided to pass on the Interconnect Usage Charges (IUC) to customers in a decision that is being seen by many as the first signal that tariffs have finally bottomed out and will go up in the coming months. Users, however, will be hoping that won’t be the case. The company is still marching towards becoming the largest operator in the country, having reached a subscriber base of 355.2 million in the quarter ended September 31st, 2019.