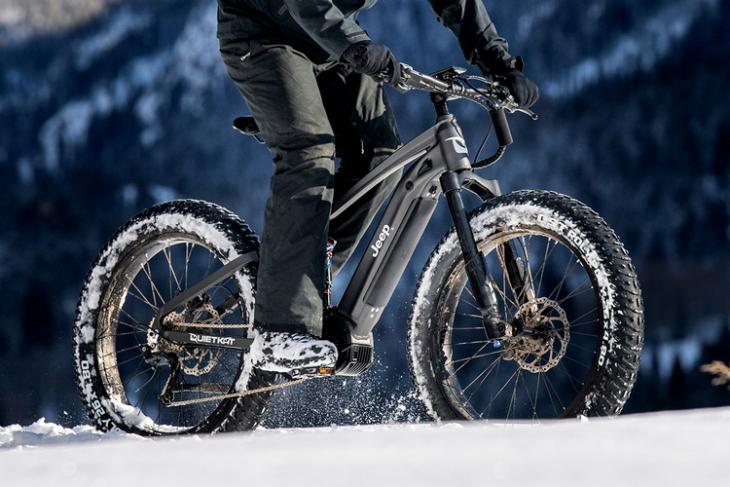 With electric vehicles like electric scooters becoming increasing popular around the world, Jeep is now apparently working on an electric bike that the company plans to launch in June. Believed to have been shown-off for a few seconds during the Super Bowl LIV earlier today, the vehicle will reportedly be capable of achieving 40 miles (64 km) on a single charge, have a 750W electric motor and will feature extra wide 4.8-inch tires, according to the Jeep website.

While there’s no more official info about the vehicle at this stage, a little bit of digging around from Electrek found that it may actually come with Magura-style brakes instead of the 4-piston Tektro Dorado hydraulic discs shown in the commercial. The report also claims that the bike might come with an 840Wh battery, RockShox rear suspension and inverted front suspension fork, all of which suggest that a massively capable e-bike may be in the offing from the famed American off-road brand.

We’ll hopefully get more info on the e-bike as we get closer to its launch date, but it will be interesting to see whether Jeep has developed it in-house or if it will re-brand an existing product from a third-party manufacturer with some minor tweaks and a bloated price-tag.

As for the Jeep commercial, it was aired during last night’s Super Bowl game that the Kansas City Chiefs won 31-20 beating the San Francisco 49ers. Titled ‘Groundhog Day’, the ad featured US actor Bill Murray reprising his role as local Pittsburgh TV weatherman, Phil Collins, in the beloved 1993 film by the same name. While the 1-minute spot was originally for the Jeep Gladiator SUV, it gave a glimpse of the e-bike at around the 39-second mark.