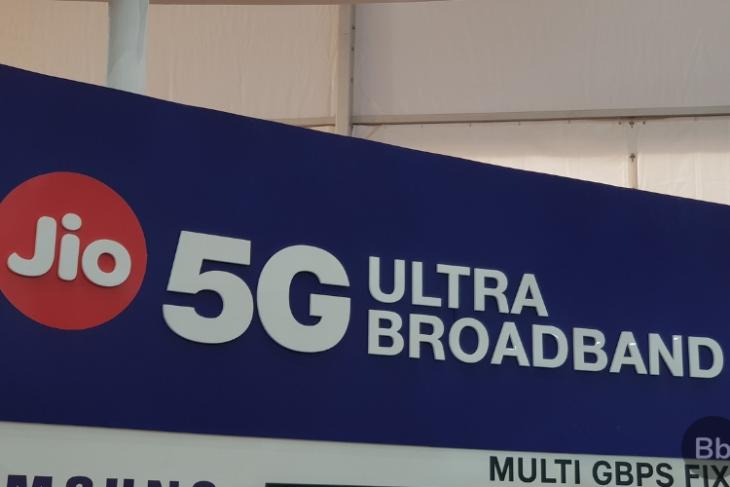 Mukesh Ambani kickstarted the proceedings at the IMC 2018 with the inaugural speech highlighting broadly where the country’s connectivity arc is heading and how the future is about a fixed-line and mobile convergence. And at Jio’s booth, the company was showcasing a demo of its future 5G services and some other cool IoT products that toe that line.

I stopped by Jio booth on the opening day of IMC 2018, and honestly, I was blown away by the sheer number of products Jio had on display.

Jio, just like every other exhibitor, had a variety of different sections within its booth. It had a Smart Home setup with its connected devices, it had a Smart Hospital demo section showcasing its 5G services, and so on.

This particular section of Jio’s booth was populated with a variety of different connected devices. From smart door locks to Jio security cameras, Jio’s booth felt like an uncharted territory to me, mainly because most of these products were shown to the public for the first time.

All these products were connected to what the sales representatives called a “Jio Hub” which lets them talk to each other and perform seemingly disparate tasks seamlessly. The exhibitor, who was giving a demo of all these products, was using an iOS app on an iPad Pro to control them, so it’s not all that complicated either.

I was able to try out the Jio door lock, Jio Security camera, and Jio’s new motion sensor device that can send push notifications. The door lock, unfortunately, failed on me, but other things like the security camera and motion detection device worked flawlessly.

On the other side, I was given a demo of Jio GigaTV. Just like other such devices out there on the market, the Jio Giga TV will turn your regular TV into a smart TV. I wasn’t shown (or briefed) the app catalog, but I could see Jio apps like Jio TV, Jio Cinema, pre-installed. It’s possible other apps will also be available at launch.

The best part, however, is the fact that you can even make phone calls or send text messages right from your TV that’s connected to a Jio GigaTV box. You can either sync your mobile phone with the box or get an entirely new number for the GigaTV and use it as a separate home connection. It even works for video calling, which, honestly, is pretty impressive.

The Jio Giga TV box, in its current state, looked very basic to me. It only had an HDMI port, an Ethernet port, and a power port. However, I was told that these products are still in the early stages of developments, and the commercial variants will be made available to the public in phases depending on the interest.

Lastly, I stopped by Jio Smart Hospital section, where the company was showcasing what appeared to be a custom interface for hospitals and small clinics. As you can see, there’s a central hub from where you can do different things like schedule an appointment, order medicine, view your medical reports, etc.

This particular interface model, when adopted will be modified according to the services offered in that particular establishment. From what I could gather, both patients and doctors will have a separate interface, however, a patient will be able to get in touch with any available doctor, at any given time.

I wish I was able to get a full demo of the interface, but the booth was swamped with people, which made it incredibly hard to even get more details out of the sales representatives there. We’ll bring you more about these Smart Hospitals once Jio fills us in on the details.

Jio also had some other cool products on the showcase like drones with facial recognition, Jio VR Headset, which were not functional unfortunately.

India has so far not seen a big name like Jio entering tele-medicine. Being able to consult a medical expert remotely through audio and video conferencing, and capabilities such as remote monitoring and diagnosis, are the kind of revolutions India needs. Props to Jio for laying a foundation, which, I truly believe will be followed by other companies as well. With 5G seemingly half a decade away from retail deployment, it’s enough time for the companies to solidify these propositions.