As someone who is deep into the Apple ecosystem, I’ve found it really hard to look beyond Apple Music for a seamless music streaming experience across iDevices including iPhone, Apple Watch, Mac, HomePod, and more. But that doesn’t mean my allegiance to Spotify has dipped. So, while I didn’t get swayed by the series of sensational allegations that Spotify made against the iPhone maker, I did find plenty of merits in those accusations, including the one claiming that Apple intentionally blocks Siri from being implemented by rival music apps to stifle the competition. As an iOS user, I always wished to use Siri with Spotify on the iPhone and iPad for an enhanced music-streaming experience. Therefore, I’m pleased to see it finally becoming a reality. Yet to give it a shot? Let’s tune into it right away!

Stream Spotify Music Using Siri on the iPhone and iPad

When you are dealing with a new feature like this one, it’s always better to clear out all the doubts first up.

So, How Do You Get Started?

Streaming Spotify music with Siri on iOS has become pretty straightforward as Apple has eventually allowed third-party music apps to integrate with the virtual assistant. Without getting into the debate about whether or not the tech giant did it because of the heat that the massive allegations created, I would say that the company should have allowed the virtual assistant to work with third-party music apps much earlier.

By keeping Siri away from the reach of third-party music apps, Apple kind of prevented the development of the virtual assistant and also forced iOS users to opt for Apple Music if they wanted to play music using voice commands. From a business perspective, it was a smart ploy. But was it a good strategy from the perspective of user-experience (forget about the competition)? No, I don’t think so. Certainly not from the high podium that Apple often speaks!

The integration with third-party music apps not only enhances user-experience but also makes the personal assistant more functional. As for the process, it’s as straightforward as it can ever get thanks to a simple toggle that can be toggled on/off from the Settings app.

Is There a Catch?

Yeah, a tiny bit. For starters, your device must be running iOS 13 with the latest version of Spotify. And second, you must end each of your commands with “On/from Spotify” so that Siri can understand which service to access. If you don’t add Spotify at the end of the command, it will default to playing Apple Music. Yeah, you’ve guessed it! There is still a hook; even though it’s a tiny one.

What If Your Device is Not Running iOS 13?

Though you can’t have a full-fledged streaming experience, there is a hack to use Siri to play Spotify music on iOS. So, if you are running the older version of iOS like iOS 12, you can use Siri Shortcuts to play song using voice. We have explained those steps in the next section. Now that all the clouds have been cleared off, it’s time to get on with the steps!

Set Up Siri to Play Spotify Music on iOS

1. Launch Settings on your iOS or iPadOS device.

2. Scroll down and choose Spotify.

3. On the next screen, select Siri & Search.

4. Now, toggle on the switch called “Use with Ask Siri”. Then, quit the Settings app. 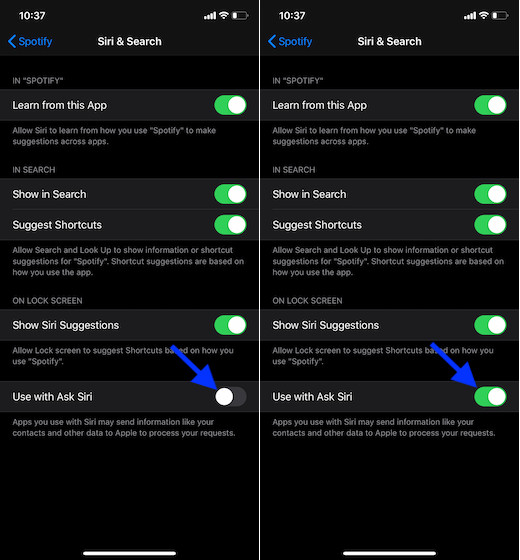 Note: You can also use Siri with other music apps like Pandora provided they have added the support for Apple’s virtual assistant. To check it out, open Settings app > music app > Use with Ask Siri. 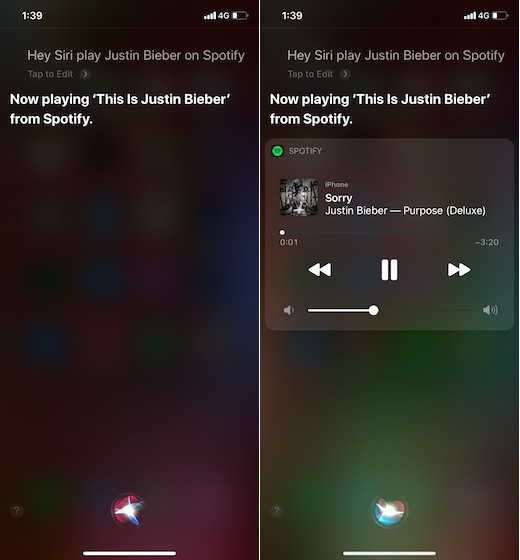 Do note that you can also use Siri to play podcasts on Spotify, ask what’s currently playing, and even control media settings i.e increase/decrease volume, skip track, and play/pause music.

How to Use Siri Shortcut to Play Spotify Music

There is a Siri shortcut called “Spotify Siri” that can let you play Spotify music on your iOS device. So, if your device is not compatible with iOS 13, try it out. Make sure you have installed the Shortcuts app (free, requires iOS 12 or later) on your device. Then, tap on this link to add Spotify Siri shortcut to your library. 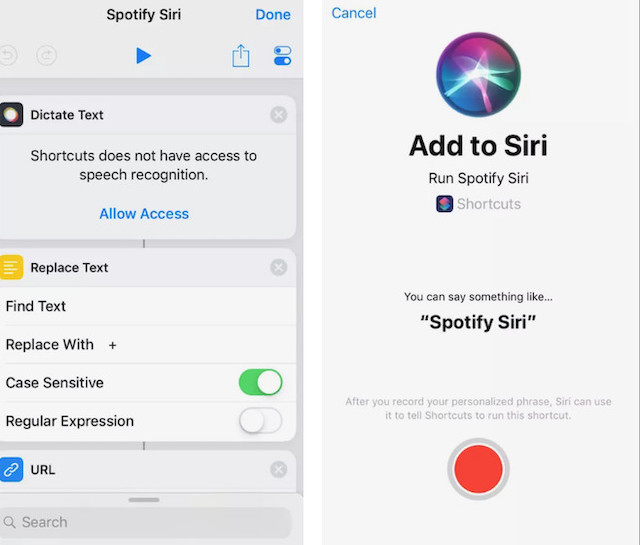 After that, open the Shortcuts app and go to your library. Then, launch the Spotify Siri shortcut and tap on the three dots. Now, tap on the settings button at the top right and tap on Add to Siri to record your phrase. From now on, you can activate Siri and speak the shortcut phrase. Then, the virtual assistant will open the Shortcut showing a box with dictation text. Speak the song that you want to play and you are ready to go.

So, that’s the way you can play Spotify music using Apple’s virtual assistant on your iOS device. From a user’s perspective, I think it’s a great move. And I’m sure a lot of music lovers are going to benefit from it. What do think of it? Feel free to share your thoughts. Also check out other new Siri features like the option to opt-out of Siri audio recording and deleting the dictation history that has been introduced in iOS 13.