Since the launch of OnePlus One, I have been a fan of the company and the devices it has produced. OnePlus 2 might have been a failure but the company redeemed itself with the launch of OnePlus 3, 3T, and 5. I love these devices so much that OnePlus 3 still remains my daily driver ever after having to test so many devices for work purposes. I recommend OnePlus devices to anyone whose budget allows them to get their hands on one. However, what transpired yesterday has put a huge dent in my love towards the company. Yesterday, a user discovered that OnePlus has built-in analytics inside its Oxygen OS which sends your personal user data to its servers. Now, this is not new as almost all companies do that because they need analytical data to figure out the problems and troubleshoot them. However, the user data being sent by the OnePlus analytics is quite extensive and hence require a closer attention. In this article, we are going to do just that. We are going to look at the kind of data that OnePlus is sending to its servers and also learn to disable OnePlus personal user data collection system.

Companies collect all kinds of analytical data to understand the device usage and patterns. For example, major analytical data collected by companies like Apple includes analytics, diagnostic, and usage information. The information includes data regarding apps and system crashes, hard resets of OS, abnormal reboots, and other similar information. These data points help not only companies like Apple to improve their services, but the relevant data (crash reports and usage statistics) is also shared with app developers to help them improve their apps. What’s most important is that all the data is collected anonymously. Hence, your privacy is totally protected.

What Personal Data is OnePlus Collecting?

OnePlus is not only collecting normal analytical data which is collected by all the companies, but it is going above and beyond to procure data which is not required for any developmental and improvement purposes. For example, the data collected by OnePlus also include the exact time when you woke up your screen. The opening and closing of apps with exact timestamps are also recorded. I don’t know about you, but I don’t think OnePlus has any business in knowing when and for how long I opened and used a certain app. Not only that, it also keeps a log of all the activities that you performed while you were inside that application.

You might think, okay that is frightening, but my data is being collected anonymously right? Here’s the scariest part, OnePlus is stamping each data point with your smartphone’s serial number, so anyone using the data will exactly know from which device the data has originated from. Not only that, it was also discovered that apart from the phone’s serial number, OnePlus is also collecting the device’s IMEI(s), phone numbers, MAC addresses, mobile network(s) names and IMSI prefixes, as well as user’s wireless network ESSID and BSSID. That’s plenty of personal information which I don’t want to be shared with anyone let alone a company which has the ability to profit from it.

What We Can Do About It?

Well, since this a system service, you cannot directly turn it off. If OnePlus wanted to collect personal data as aggressively as it is doing right now, at the least it should have made it optional and given a toggle in the settings to turn it off. However, there are no such settings. However, users at Reddit have discovered a way to disable this feature using the Android Debug Bridge or ADB. To use ADB, you will need either a PC or a Mac along with your phone. We have created a separate article detailing how you can install ADB on your computer. You can read all about it by clicking here.

After you have installed ADB on your device just connect your phone to your system. Remember to enable the USB Debugging option which is mentioned in the tutorial above. Since I am using a Mac, I will be using the terminal for this tutorial, however, you can use command prompt on Windows as the commands for both are the same.

1. Connect your device to your computer via USB and launch the terminal. Now type the following command and hit enter/return just to check if your device is being recognised by ADB or not.

If your device is recognised, you should see an alpha-numeric code representing your device with the word “device” written next to it.

2. Now copy and paste the following command and hit enter/return to run the command. You should see your device name showing after you run this command.

3. Now, just paste the command mentioned below and hit return/enter. This should remove the system feature which is responsible for sending all the analytics data. You will see the word “success” being printed on the terminal to indicate that the process has been successful. 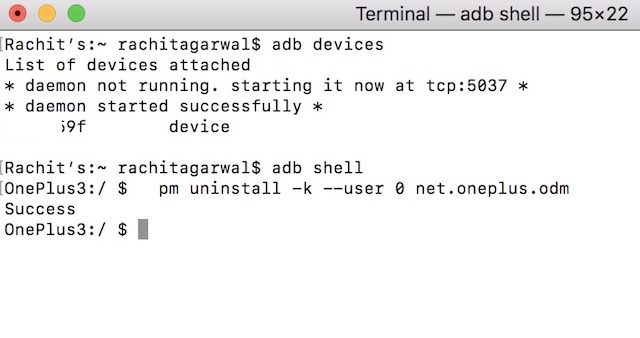 The process has been verified and deemed harmless by many Reddit users and although I still haven’t seen any adverse effect of using this method, you should do this at your own risk as it is not an official method. In the wake of this discovery, OnePlus might release an official update to stop this kind of data mining altogether, hence you can wait if you don’t want to take risks.

SEE ALSO: How to Get Pixel 2 Launcher on Any Android Device

When I first came to know about this, I was horrified to learn the extent of data being collected by OnePlus. But the biggest surprise was that they were doing this without giving users the protection of anonymity. As a OnePlus loyal fan, I am totally appalled by this news. If you are also a OnePlus user, do let us know your thoughts by dropping them in the comments section below. Also let us know if you are ready to use the ADB command or are waiting for OnePlus to officially put an end to this.