Pokemon Go has quickly become one of the most popular mobile games out there on both iOS and Android. It has surpassed Tinder in terms of  popularity in the US and it’s quickly reaching the popularity of Twitter. It won’t be long when Pokemon Go surpasses most social media apps in terms of popularity and daily activity, considering the game has had a limited release. However, there are ways to download Pokemon Go on Android and iOS devices in any country outside the US, Australia and NZ.

If you are still not familiar with the game and have no idea how to play it, you can check out our beginner’s guide to Pokemon Go. It will help you get up to pace with the happenings in the virtual Pokemon world, where you can catch, train, and battle with Pokemon in your city and neighborhood, thanks to its augmented reality features.

Pokemon Go doesn’t offer Pikachu as a choice for your starter Pokemon, not directly at least.

Pokemon Go pays homage to the first generation of Pokemon games that were released on the GameBoy. These games include Pokemon Red, Pokemon Blue, and Pokemon Yellow. The availability of Pokemon in Pokemon Go is limited to the first generation, which means you can only catch the original 150 Pokemon (except for the Legendary Pokemon) in this game. It also means that you can pick from the original starter trio, Charmander, Squirtle, and Bulbasaur. These are the most loved starter Pokemon in the Pokemon universe. However, there is one other Pokemon that is loved and considered to be the icon for the entire Pokemon franchise. That is Pikachu, who is the mascot for the Pokemon franchise and the main Pokemon in the cartoon series.

Select Pikachu as your Starter Pokemon in Pokemon Go

This method is simple but can be a bit tricky if your GPS isn’t accurate. Although, it should work if you try it carefully. Here’s how you can get Pikachu as your starter Pokemon in Pokemon Go. 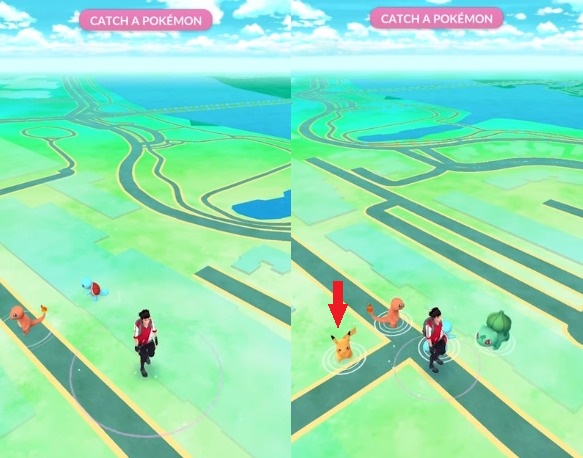 When you first meet Professor Willow in Pokemon Go, he will offer you the original trio to pick one as your starter Pokemon. Instead of tapping on a Pokemon and catching it, just walk away from them. Keep walking until these three Pokemon disappear from your screen. Once they disappear from your screen, you will see them pop-up again in your current location. Don’t pick one yet. Keep walking again and make them disappear from the screen. Repeat the same three times and when they pop-up the fourth time, you will also see a fourth Pokemon, which is Pikachu. You can now tap on Pikachu and catch it as your first Pokemon.

Start with Pikachu to be a Pokemon master like Ash Ketchum

If you don’t like the original trio of starter Pokemon, this is the perfect method to start your journey with a Pikachu just like Ash Ketchum from the Pokemon cartoon series. Also, keep in mind that Pikachu is not more powerful or better than the other three Pokemon, if anything he might be a bit underpowered compared to the other three. However, we all know that if anyone who has watched the Pokemon cartoon series is a little attached to Pikachu, so if that’s your reason, don’t hesitate and get Pikachu as your starter Pokemon.