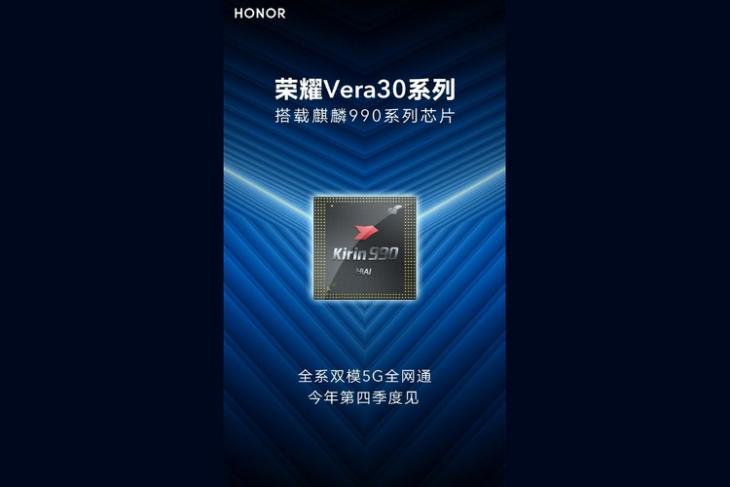 A few days after taking the wraps off of the Kirin 990 SoC at the IFA 2019 tech show in Berlin, Huawei has confirmed via a Weibo post that the Honor Vera30 (V30-series) will be the first Honor-branded smartphone(s) to ship with the new chipset. The company had earlier confirmed that its upcoming phablet flagship, the Mate 30, will also be powered by the new processor.

In case you don’t know it already, Huawei last Friday unveiled its latest flagship mobile processor, the HiSilicon Kirin 990, with an embedded 5G modem. Built on the 7nm+ EUV process node, the SoC is being described as the ‘world’s first 5G SoC’ that the company claims will not just save on space but will also be more power efficient than current solutions. According to Huawei, the integrated modem chip will offer download speeds of up to 2.3Gbps and upload speeds of up to 1.25Gbps.

The Kirin 990 includes an octa-core CPU with four powerful Cortex-A76 cores clocked at up to 2.86GHz and four power-efficient Cortex-A55 cores clocked at a maximum of 1.95GHz. It also comes with a 16-core Mali G76 GPU and a dedicated quad-core NPU (neural processing unit) that will be used for voice and face recognition tasks.