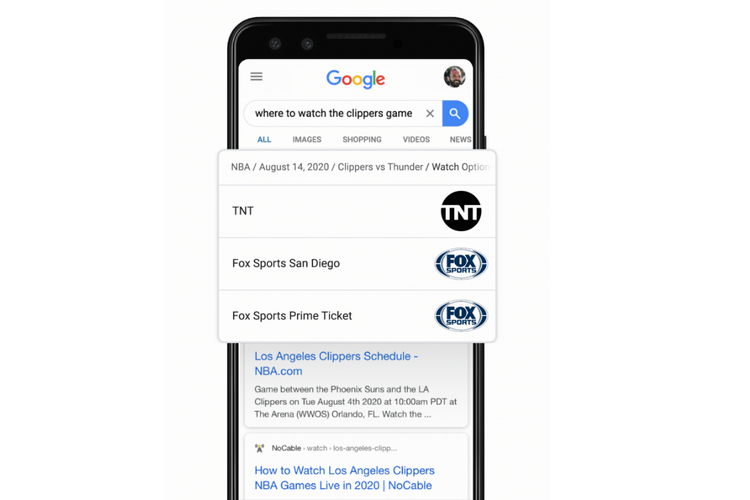 Google is making it convenient to keep track of live sports events and TV shows right from Search, starting in the U.S. You can just search for questions like “Where to watch the Clippers game” on your phone and Search will list live channel options for watching the game. Right now, the feature is limited to MLB and NBA games but Google hopes to add more leagues in the future.

When you search for individual teams, you will also see a ‘Live on’ button to view the match-streaming TV channels apart from the usual live scores, top stories, and standings. Google mentions that it will expand the digital streaming options by adding more cable and network channels soon.

Other than live game shows, Google is building on its TV show and movie recommendations introduced last year to add live content carousels from cable and broadcast providers. Google is dividing the carousel into two sections namely On TV now and On TV later.

“Our “On TV now” carousel shows you programming across multiple channels that’s currently airing, while “On TV later” shows you recommendations for future programming”So when it’s Sunday night and you just can’t decide what to watch before the week begins, Search is here to help,” says Google.

As mentioned earlier, these features are live for Google Search users in the U.S. We could expect the software giant to expand these new additions to more regions in the coming months, although there’s no word on the expected availability just yet.

Google Cracks Down on Misleading Titles, Icons in App Listings on Play Store