Earlier this month, we were given a first glimpse of Gmail’s aesthetic and functional overhaul, which also teased a few of the upcoming features such as a ‘confidential mode’ and the ability to send self-destructing emails among a host of other changes. At long last, Google has finally started rolling out the updated interface and features, announcing the changes on its official Keyword blog. Here’s what’s new:

This is by far the biggest change in this update. Confidential Mode lets users prevent their emails from being misused in various ways. Firstly, Gmail will now allow users to send self-destructing emails by setting an expiration date for each message. It will also let users revoke the emails they have sent. Moreover, users can also set an extra layer of security to their emails by linking them with a pin or password functionality, so that a recipient can only read the email’s content if he/she has received the passcode on their smartphone.

Moreover, the updated Information Rights Management tools prevent the recipient from copying, forwarding, downloading or printing the email’s content, if the sender chooses to activate the feature. Confidential Mode will be rolled out in the upcoming weeks in a phased manner, starting with G Suite subscribers. 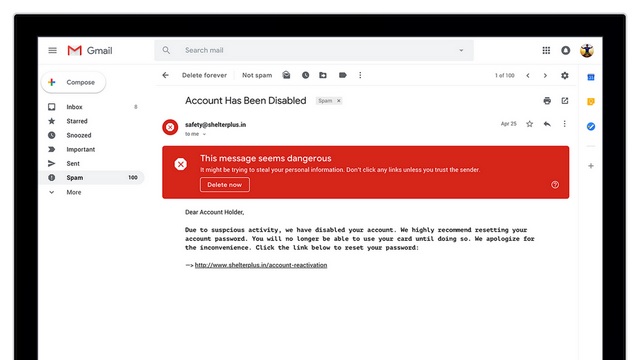 Moreover, Gmail will now display warning messages to users in a more prominent fashion to safeguard them from malicious redirects and warn them from accessing web links mentioned in a dodgy email which might lead to phishing or other scams.

Another highly utilitarian feature brought by Gmail’s redesigned interface is native offline support, which means users can continue to work on Gmail’s web client even in absence of an internet connection, although to a limited extent. One can now perform tasks like inbox search, compose messages, reply, delete and archive up to 90 messages on a stretch. This feature will become available in the next few weeks. 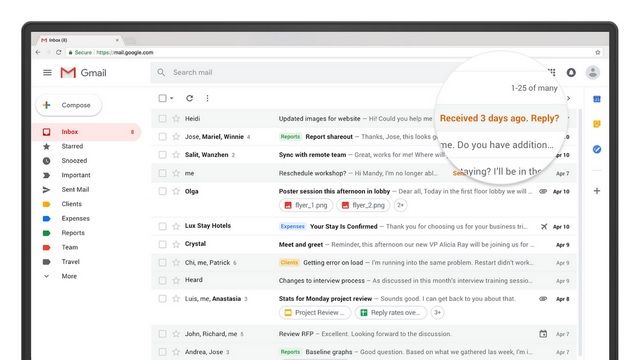 Gmail now also comes with some AI-driven features such as Nudging, which subtly reminds users about unread messages that might have been missed, asking them to reply to such emails and follow up on them. Moreover, the Gmail mobile app’s Smart Reply feature has also arrived on Gmail’s web client, which means users can now reply to an email in a jiffy by choosing from a wide array of response templates. 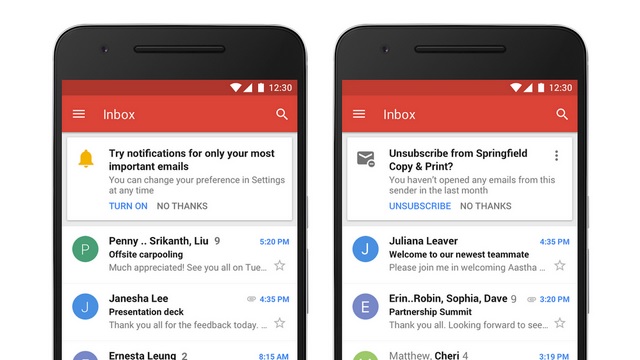 Aside from Gmail’s web client, Google has also introduced a couple of new features on the mobile app. The first one is a smart notification feature, which allows users to tweak the priority levels of incoming emails i.e. users can now choose to receive notifications only when a highly important person sends an email.

The second one is a smart unsubscribe feature which regularly provides recommendations about mailing lists users should unsubscribe from. This feature analyses the number of emails from each sender and how regularly the recipient actually reads them, which gives a clear idea about the importance of a sender/mailing list to the user. Both the features will be rolled out in the next few weeks on the Gmail mobile app.

Gmail’s redesigned web interface also brings a host of quick action tools that will let users accomplish a host of tasks like archive, mark as read, delete or snooze an email by just hovering the cursor over it. Moreover, the attachment files associated with an email will now be visible below each entry on the Inbox page, allowing users to access the files without even opening the email.

Google has also introduced a deeper integration of Google apps in its email service with Gmail’s redesign. Thanks to the change, users will now see icons of three apps i.e. Keep, Calendar and Tasks on the top right corner of the inbox, allowing users to write quick notes, create calendar invites and do a lot more quite easily. The integration feature will also be rolled out to other G Suite apps like Docs, Sheets, Slides and Calendar in the next few months.

Gmail on Android Gets Confidential Mode

Gmail Confidential Mode Starts Rolling Out: Here’s How To Use It