Skip to content
Home News Samsung Galaxy Watch 3, Watch Active 2 Get ECG Monitoring in the US 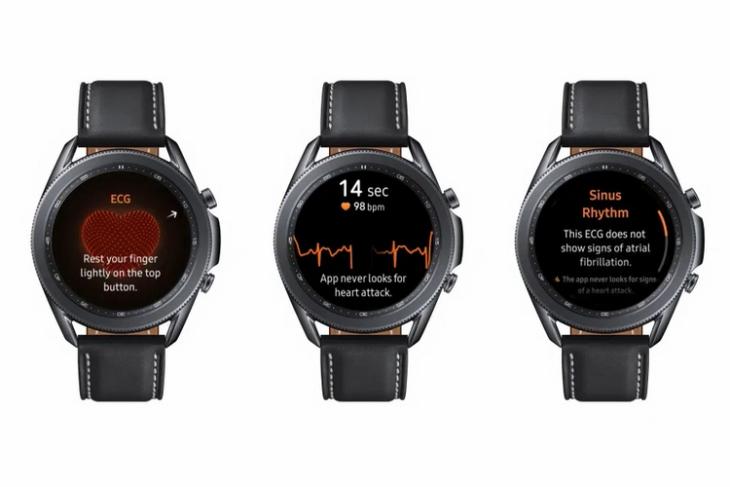 Samsung has started rolling out the ECG heart monitoring feature to its Galaxy Watch 3 and Galaxy Watch Active 2 in the US after receiving clearance from the US Food and Drug Administration (FDA). According to Samsung, the ‘ECG Monitor’ feature will be part of the Samsung Health Monitor app, enabling users to check for heart rhythm irregularities and find out if they have signs of atrial fibrillation, or AFib.

In an official press release announcing the rollout of the new feature, the company said: “Beginning September 23, users will have access to yet another next-generation feature, as on-demand electrocardiogram (ECG) readings come to Galaxy Watch3 and Galaxy Watch Active2. This tool recently received clearance from the U.S. Food and Drug Administration (FDA), and will soon be available through the Samsung Health Monitor app when connected to a compatible Galaxy smartphone. The new ECG Monitor app allows users to monitor their heart rhythm for irregularities, scanning for signs of Atrial Fibrillation (AFib)”.

It is worth noting that both the watches already had the ECG heart monitoring feature, although, it was restricted to South Korea because of the delay in regulatory approval in the US. Both the watches are available for purchase in India, and while the Galaxy Watch 3 was just launched last month at a starting price of Rs. 29,990, the Galaxy Watch Active 2 has been on sale since last December.

ECG heart monitoring was originally popularized by Apple when it rolled out the feature to the Apple Watch Series 4 in 2018, making them the first over-the-counter consumer electronics devices in the US to do so. Since than, a number of other smartwatches and fitness bands, including the Fitbit Sense, Withings ScanWatch and the Amazfit Smartwatch 2, have also incorporated the feature that has often been credited with saving people’s lives around the world.