Evernote is one of the oldest and most feature-packed note-taking software. The app offers a ton of different ways which you can use to collect notes. You can create text-notes, voice-notes, and even use Evernote’s Web Clipper tool to directly save the entire article in your notes. However, all these features have made Evernote a very clunky and complex piece of software. New users need to invest a considerable amount of time to learn it before they can actually utilize even half of its power.

Another big negative for Evernote is that the company doesn’t seem to be stable. Just half an year back, Evernote lost its CFO, CTO, CPO, and HR head in just one month. The company is still going on, but the future remains uncertain. Add that to the fact that the paid version of the app costs a hefty $4.99/month, no one can blame you for looking for Evernote alternatives. Well, whether you can’t rely on Evernote for its longevity or are just looking for something new, here are the 10 best Evernote alternatives that you can use in 2019.

If you are a person that thinks that you need more features than what Evernote can give you then Notion is just for you. Notion is a note-taking app which does much more than just allowing you to take notes. Notion is an all-in-one work-space which allows you to take notes, create an internal wiki of notes, collect research material from the web in form of links, text, and images, create table and databases, create to-do lists, and more. Despite bringing so many features, Notion remains easy to use because it allows users to use only those features that they need without overcrowding the user interface. 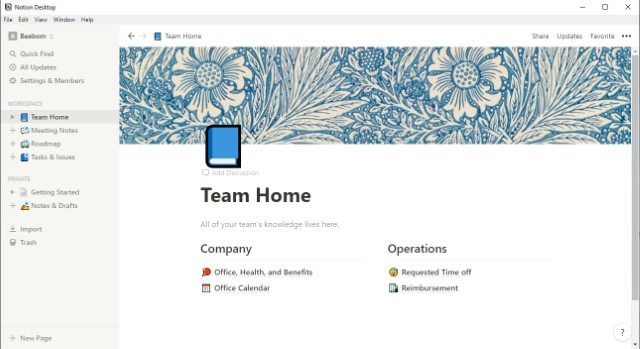 Another great thing about Notion is its support for templates. There are hundreds of templates that you can just download and use. From business templates like agile process, coding guidelines, and more to create templates like video production, mood board, editorial calendar, you can find Notion templates for everything that you want to do. This saves users a ton of time from creating their own templates and they can get started as soon as they download the app. Since the entire Notion community can create and share templates, there are always new and novel templates to discover.

Notion also comes with a web-clipper which allows you to easily save webpages offline just like on Evernote. Another thing that makes Notion a great Evernote alternative is the fact that it supports instant import from Evernote. That means switching from Evernote to Notion is as simple as it can get. In my opinion, Notion is one of the best Evernote alternatives on the market and you should definitely check it out.

For anyone who is looking for a note taking app which is as powerful as Evernote but doesn’t cost you anything, OneNote is the one for you. Coming from Microsoft, OneNote brings all the features that Evernote has and then some. The app allows you to easily save text-notes, voice-notes, pictures, and more. It even has its own web clipping tool just like Evernote. However, what makes OneNote one of the best Evernote alternatives is the fact that the service is available cross-platform so no matter which device you are using, you can get OneNote working on it. 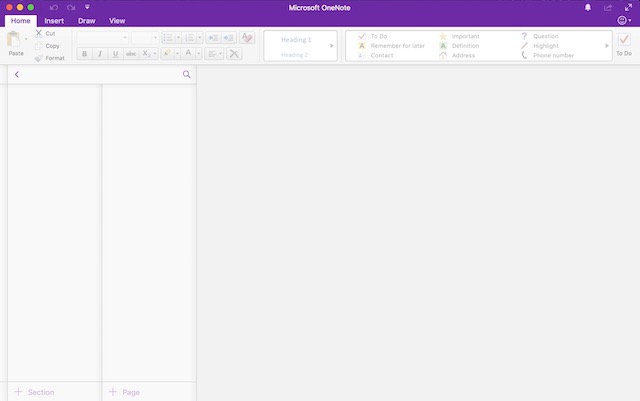 That said, Just like OneNote brings Evernote’s power, it also comes with all the Evernote’s drawbacks. So, expect a complex note-taking app with large set-up files and a learning curve attached to it. Still, the fact that it’s completely free makes it a dream alternative for anyone who is looking to replace Evernote with a similarly powerful yet free alternative. 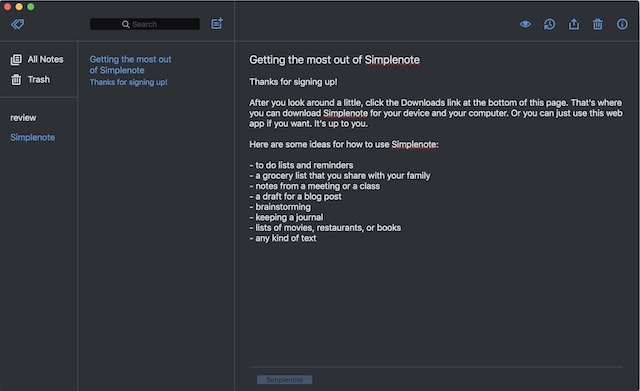 All your notes are synced across devices allowing you to take notes anywhere. That said, the best part about Simplenote is its modern and minimalistic UI which makes using the app a joy. Also, the app is very light and doesn’t take more than a few MBs of space on your device. Simplenote has a dark mode too which in my opinion looks really beautiful. I do miss the ability to keep pictures inside my notes, but other than that, I don’t have any problem with this app. Also, did I tell you that it’s completely free?

Google Keep is one of the best note-taking apps in the market right now, and it also happens to be my most favorite app on the list. I love how Google Keep displays all my notes in the form of simple cards which not only makes the notes look beautiful but also makes it easy to scan through them at a glance. I also love the ability to color code my notes which makes it easier to find the exact note that I am looking for. 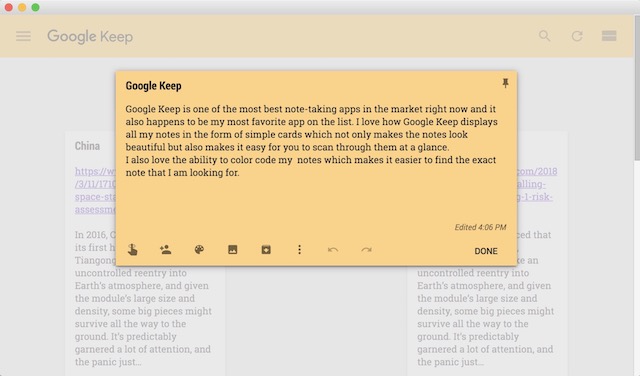 My most favorite feature of Google Keep is that it makes it really easy to set reminders, create lists, and more. The app also has a web companion which works exactly like Evernote’s web clipper and allows users to save web-articles directly inside the app. Other features include the ability to share notes, add pictures, take hand-written notes, and more.

While Evernote has a note sharing feature, it is not as robust as many other options out there. If your main problem with Evernote is that it doesn’t efficiently allow you to share notes with your team members then you should try out Noetjoy. Notejoy is an incredible note-taking application which takes note sharing to the next level. In the app, all your notes are arranged in libraries. You have a personal library where you can save all your private notes. Then there are shared libraries which contain notes you have shared with other users. 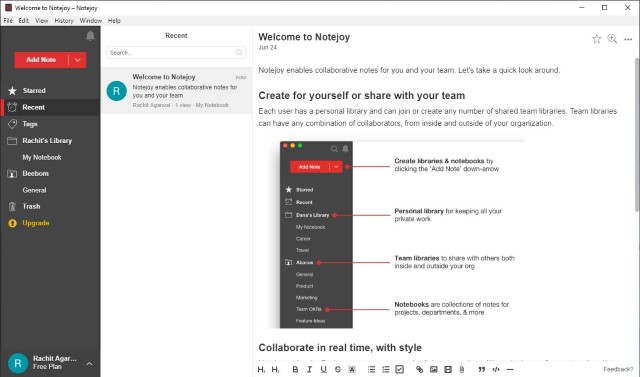 Once you share a library with someone, all the notes saved in the library are automatically shared with them. Then you can collaborate with other users on that note. In fact, Notejoy even brings a real-time chat feature which you can use while taking notes. Other features of the app include pinned notes, image galleries support, support for any kind of documents including word, PDFs, Google Doc, and more, markdown support, tags, and more. All these features make Notejoy great for people who like to work in shared spaces. If Evernote was unable to meet your note sharing needs, you should give Notejoy a chance.

If you are one of those few people who has surpassed the limits of Evernote, and even it cannot fulfill all your needs, DEVONthink is just for you. In fact, calling DEVONthink a note-taking app will be undermining its full potential as it’s not only a note-taking app, it’s also a full-blown document management system which can handle PDFs, links, and more. The app even has a built-in browser which lets you open the links inside the app itself. 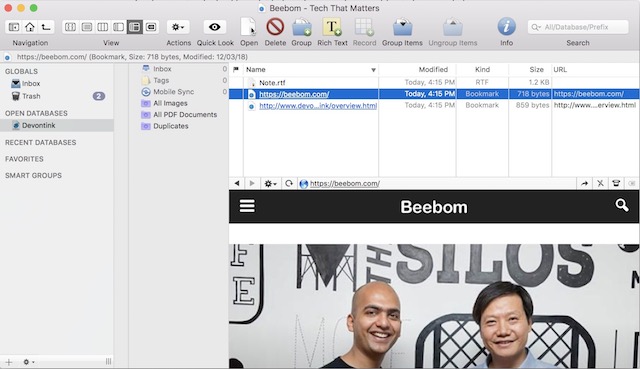 DEVONthink also brings a ton of automation tools and scripts which you can use to automate your note organization. The software basically has more features than anyone will ever need. The app also has a web clipping tool just like Evernote and offers the best search features out of any app on this list. If Evernote cannot meet your demands, DEVONthink is certainly for you.

Elephant is an open-source note taking app which is exactly like Evernote. It’s basically what Evernote would have been if it was an open-source app. You get all the similar features such as creating notes, organizing them inside notebooks, syncing them across devices, and more. If you have used Evernote before and want the exact same features without having to pay a dime, download Elephant. Probably the only missing feature of Elephant is that it doesn’t support mobile devices. Apart from that, past Evernote users will feel right at home here. 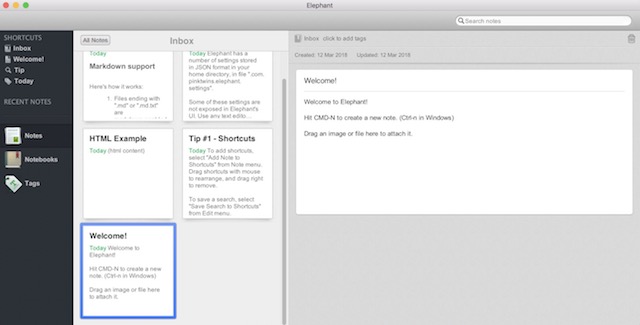 If you are a Mac user, Keep It can serve as a good Evernote Alternative option for you. Keep It is from the guys who previously created Together 3 which was one of the most famous note-taking apps on the Mac. Their new product brings a better and more organized user interface which not only looks good but is also very intuitive. You can create notes, organize them using notebooks, tags, bundles, and bookmarks, save web articles, and more. Probably the biggest feature of Keep It is that it is optimized for macOS which means you can perform native functions such as searching for notes using Spotlight, back up with Time Machine, open notes in any app, and more. 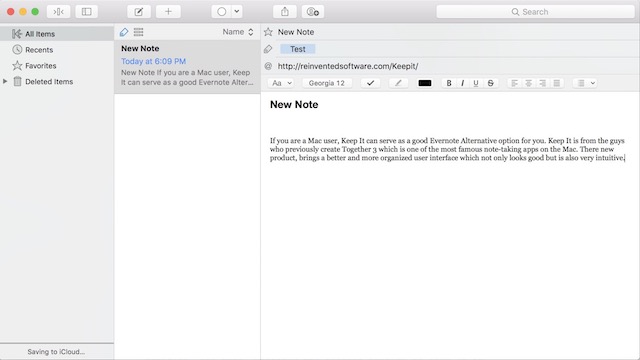 Zoho Notebook is one of the coolest looking note taking app on this list. The app lets you easily create Notebooks which actually look like a real notebook. Inside, you can create text-notes, voice-notes, add pictures, and more. It also has a web clipping tool which lets you save articles from the web. One of the best features of Zoho is how easy it makes writing and editing your notes by giving all the controls right at your fingertips. 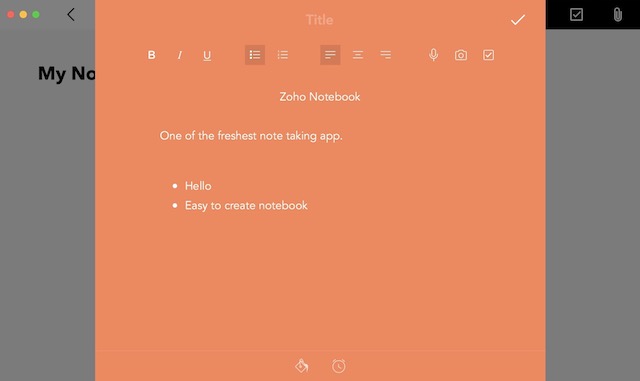 I also love the quick note feature of Zoho Notebook which is available for macOS. Basically, the app creates a menu bar app, clicking on which, you can record a quick note without even opening the app. It also supports the multi-window editing feature in iPad. The app also supports Google Keep like color coding of your notes, making it easier to find the notes you are looking for. Zoho Notebook is one of the most fully featured note-taking apps you can use. The fact that it also looks good also helps.

CintaNotes is a very good Evernote alternative for Windows users. CintaNotes is a lightweight, fast, and simple note-taking software which makes it really easy to save notes to your device. The app allows you to clip information from almost anywhere. Any information that you can copy can be clipped to CintaNotes. Just, select the information and hit Ctrl+F12. 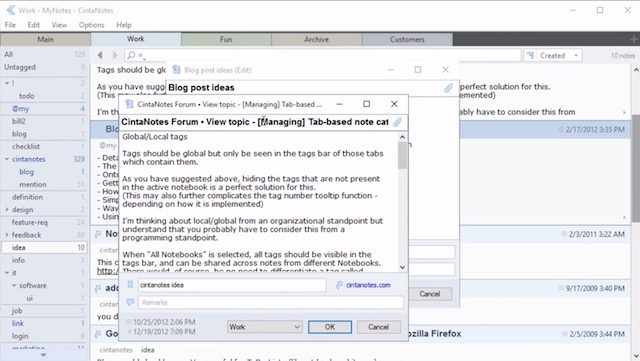 The app also lets you interlink notes using note links, allowing you to basically create your own personal wiki of knowledge. The notes are organized by either using tags or creating notebooks. The notes inside a notebook are placed in a vertical scrolling list making it easy for you to find the one you are looking for. CintaNotes also packs a powerful search engine, allowing you to find your notes in an instant. CintaNotes is basically one of the most powerful note-taking apps you can get on Windows.

SEE ALSO: 10 Best Note Apps for iPhone You Can Use

That ends our list of the best Evernote alternative note-taking apps you can use. All the apps that are mentioned here are really good. However, it totally depends on your use-case scenario and requirements as to which app is the best for you. Do check them out and let us know which one catches your fancy. Also, if you are already using a good note-taking app which you think is a worthy Evernote alternative, share with us by dropping its name down in the comments section below.