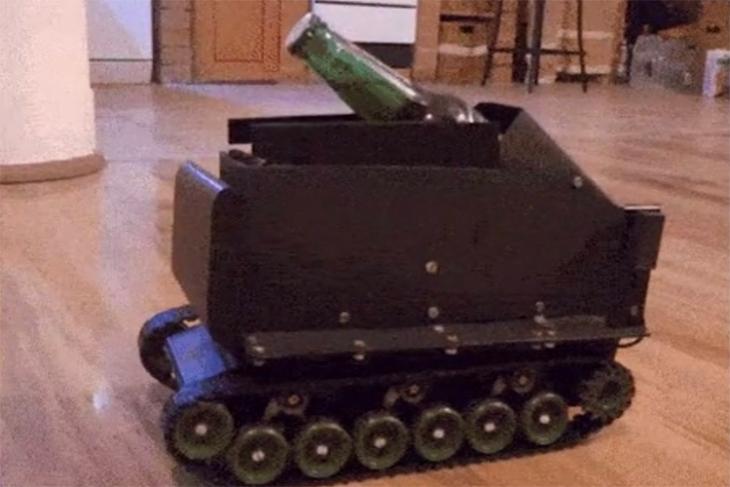 Software developers sometimes get up to the most incredible of projects even if those projects are pretty much things that accomplish a very small specific task. With the advent of voice assistants like Amazon’s Alexa and Google’s Assistant, along with the ease of incorporating their SDKs into any project a person desires, people are coming up with some really incredible stuff.

Take Balázs Simon. Simon, a software engineer, decided to put his development skills to use and build something awesome. The result — a tank that fetches you beer.

Simon started simple, buying a toy-tank chassis, and then proceeded to make it a robot. He created a skeleton of the crane he wanted to use for elevating the beer out of the tank, so one could pull it out, and then created the entire eco-skeleton of the tank to cover all the internals.

Simon used a Raspberry Pi for the brains of the tank and also incorporated a Walabot into the tank to act as its eyes. The tank can now even follow him around the house and pop out the beer bottle on command.

Just to make things more interesting and easier to control, Simon added Alexa integration to the tank, allowing it to be controlled by voice.

The entire project with all the materials used, and step-by-step directions have been posted to Hackster, so anyone with reliably good knowledge of coding, and electronics can make it. Be warned though, the project difficulty has been marked as ‘advanced’, and after going through the instructions, I’m pretty sure it’d take me a lot of time to actually build this thing for my personal use.

Either way, if you’re interested in making one, or if you’re just curious about the entire procedure followed by Simon, you can head over to Hackster and check out his project.