Skip to content
Home How To How to Create a Radio Station on Spotify, Apple Music, and YouTube Music

The algorithms of music streaming services do a great job suggesting songs based on the songs you already listen to. While this might seem harmless on the surface, this approach essentially limits your listening genres and you’ll eventually reach a state where you end up wondering why all the songs in your music library sound just the same. If you are looking for ways to discover new songs and diversify your listening habits, creating a radio station is a great way to get started.

What makes radio stations different is that the music suggestions are based on a particular song or playlist as opposed to your entire music library. This way, if you found a new song and are interested to explore more songs from that genre or mood, you can simply create a radio station for that song. Today, we’ll be showing you how to do that on popular music streaming services. With all that said, let’s get started.

Note: You can create radio stations based on artists, playlists, and songs. I’m using songs radio in this article for getting specific results.

Spotify made a controversial switch from endless radio to radio playlist a few years back. When you start a Spotify radio, you’ll get a playlist with a limited number of songs based on the original song. To get started, tap on the vertical three dots menu present in the top right corner of the player interface and choose ‘Go to Song Radio.’ 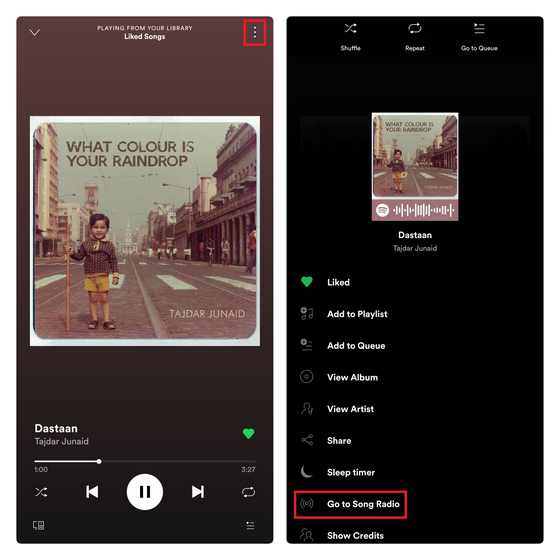 Spotify will now direct you to a playlist it claims is based on the original song. However, I don’t entirely agree with this claim for two reasons. First up, the track ‘Dastaan’ is an instrumental masterpiece, whereas the songs generated in Spotify’s radio playlist have strong vocals. Another flaw of Spotify radio playlists is that it is heavily inspired by overall listening habits. As you can see below, I’ve liked almost all the songs in the generated playlist, and I don’t find them relevant to the original song.

In fact, I’m not the only one who feels this way. Going through posts on Spotify Community, I found several instances where listeners agree that Spotify radio is essentially an echo chamber now. That said, there’s one workaround to get an endless song radio station on Spotify. Instead of creating a song radio, you should create a new playlist with that song and start a playlist radio. Unlike song radio, playlist radios are still endless and you get more songs as you listen. Oh, and if you’re wondering, artist radios function the same way as song radio playlists. If you liked this nifty trick, check out our best Spotify tips article. 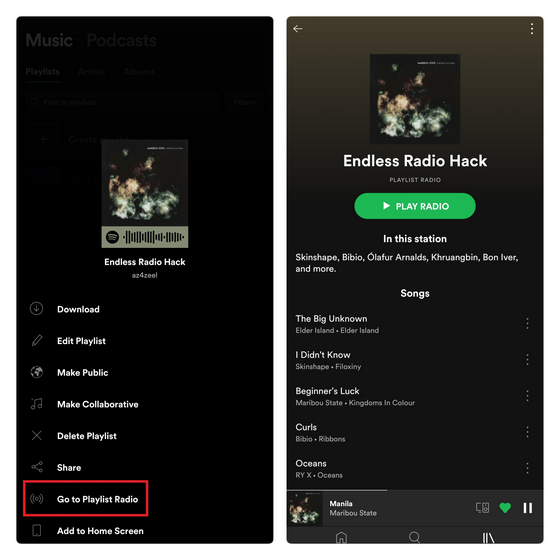 To create a radio station on Apple Music, play an artist, song, genre, or playlist, and choose ‘Create Station’ from the list of options available after tapping the horizontal three dots menu. If you’re using an iPhone, you can also use the command “Hey Siri, start a station from <insert song/playlist/artist name here>.” 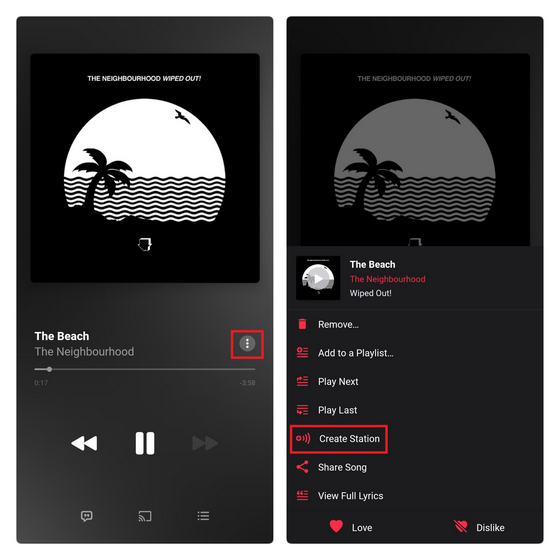 You can press the Queue button in the bottom right corner to view two upcoming songs. New songs on the endless radio will show up as you listen further. Based on my experience, I found Apple Music’s custom stations to be relatively true to the original song’s mood.

If you want to stop wasting time on YouTube or have transferred Google Play music library, YouTube Music is a neat option. To create radio stations on YouTube Music, tap on the vertical three dots menu in the top right corner and choose ‘Start radio.’ 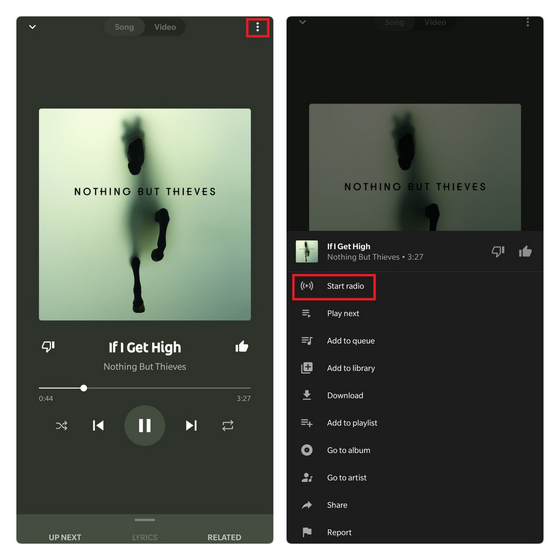 You can swipe up from the bottom to access the song queue. In addition, you can easily swipe left to remove songs you don’t like from the queue. Moreover, press and hold the slider at the right end to reposition upcoming tracks.

As you grow older, your music taste evolves and you’re bound to outgrow certain songs. The song you’re currently listening to on loop might seem too lame if you play it after a few years (with a few exceptions, of course). Hence, you can use radio stations to keep your music library fresh and robust. If you want to share your newly discovered songs with your friends, check out our article on how to share songs to Instagram Stories from Spotify, Apple Music, and more.