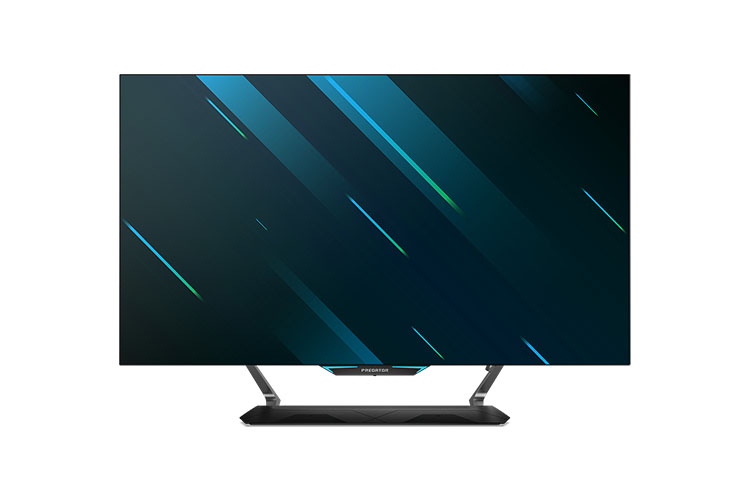 Probably the most insane gaming monitor we’ve seen so far, the Predator CG552K packs in a massive 55-inch 4K OLED display. It supports up to 400nits brightness, and covers 98% of the DCI-P3 color gamut, so you can expect your games (and multimedia content) to look stunning, as you’d expect from an OLED display anyway.

At 55-inches, the monitor is just way too big to be a gaming PC monitor for the most part, and as it’s already sliding into TV-sizes, Acer is mostly aiming this monitor at console gamers, what with consoles like the Xbox One X and the PS4 Pro supporting 4K games, and the upcoming Xbox Series X and PS5 which will most definitely bring even better performance to the table.

The monitor is also Nvidia G-Sync compatible, and supports variable refresh rate for a smooth gaming experience. Moreover, the monitor comes with up to an incredible 0.5ms response time, and a 120Hz refresh rate.

There’s more, by the way. The Predator CG552K comes with a proximity sensor allowing the monitor to wake up when someone is nearby, and go into power-saving mode when they leave the monitor’s proximity.

Acer has decked out the monitor with 2x HDMI 2.0 ports, 2x DisplayPort 1.4 ports, 1x USB C port, and two USB 2.0 and USB 3.0 ports as well. There are also two 10W speakers, and a customisable light-strip, because what’s more “gaming” than lights on everything.

Acer says the monitor will be available in North America in Q3 2020, and as one might expect, it’ll be priced really high, with a starting price of $2,999.

The Predator X32, another gaming monitor unveiled by Acer at the event, comes with a 4K mini-LED panel with 1152 zone local dimming. The monitor can get really bright with a maximum brightness of 1440 nits. Acer is aiming this monitor at gamers who also create their own videos, and as such, the Predator X32 supports 10-bit color, and covers 99% of the Adobe RGB and 89.5% of the Rec2020 color gamut.

The IPS panel on the X32 comes with a refresh rate of 144Hz, and viewing angles up to 178-degrees. There’s also Nvidia G-Sync support on the monitor to reduce ghosting effects and deliver a smoother gaming experience.

Covering all its bases, Acer also unveiled a curved gaming monitor for gamers who want a more immersive experience in their games. The Predator X38 comes with a 37.5-inch UWQHD+ display (3840×1600 pixels), and a 2300R curvature.

When overclocked, the monitor can achieve refresh rates up to 175Hz, and response times of as low as 1ms. The Predator X38 also provides great color accuracy, covering 98% of the DCI-P3 color gamut.

For connectivity, Acer provides an HDMI 2.0 port, a DisplayPort 1.4, and 4x USB 3.0 ports. There are also two 7W speakers built into the monitor.

The Predator X38 will be available in North America in April this year, for a starting price of $2,399.

CES 2020 has seen a lot of announcements already, what with Samsung unveiling new 8K QLED TVs, and more. Our team is at Las Vegas to cover the event as it happens, so stay tuned for more updates on one of the biggest tech events of the year.