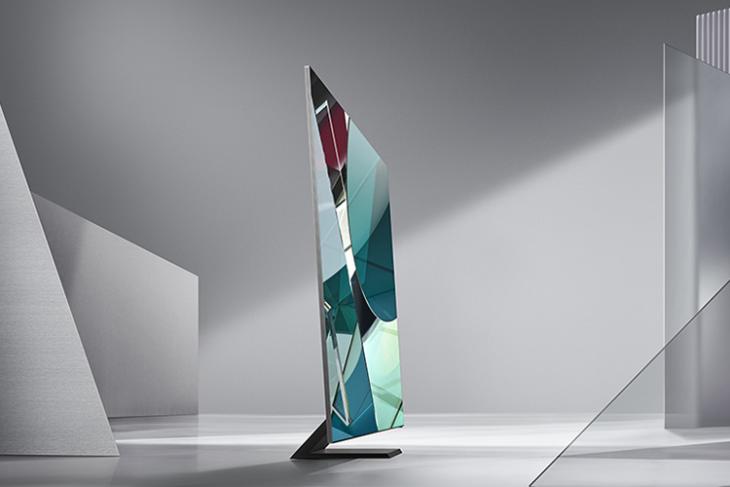 As we head into CES week in Las Vegas, companies are getting their product announcements out of the way. Following reports that Samsung will announce an 8K TV with no bezels, and having announced new Odyssey gaming monitors, the South Korean giant has now unveiled its truly bezel-less 8K TV at CES 2020.

The Samsung Q950 comes with a design that basically removes the bezel entirely, and Samsung is claiming the TV offers a screen to body ratio of 99%, which is the highest ratio in the TV market. Moreover, the TV is just 15mm thick, and can be mounted flush with the wall to make it look even more stunning.

Samsung is also saying that the Q950 is the world’s first TV to support native 8K playback, and support for 8K films shot with the AV1 codec. Samsung’s entire 8K line-up in 2020 will ship with these capabilities built-in.

Obviously, 8K content isn’t really available in the market yet, but Samsung has fitted its 8K TVs with its Quantum 8K Processor for upscaling non-8K content.

For improved sound quality on the TV, Samsung has apparently put speakers on all sides of the display, along with sub-woofers in the back, and the company is using a technology called ‘Object Tracking Sound+’ which uses AI to match the movement of sound to the movement of objects on the screen. That sounds ridiculous as well, and also something that we can’t really give an opinion about without experiencing it first.

The new 8K QLED TV from Samsung also brings in a ton of other features and technologies into the living room, with features like an Active Voice Amplifier that increases the volume of dialogue if there’s a vacuum cleaner or a blender running nearby. According to Samsung’s press release, “Active Voice Amplifier (AVA) helps the 40% of U.S. consumers who say that these sounds tend to distract them while they’re watching TV by detecting the these noises and automatically enhancing voice clarity.”

Samsung is yet to announce pricing or availability details for its new 8K line-up of QLED TVs, but it’s fair to assume that they’ll not be cheap by any measure.