Smartphones cameras have evolved a lot in the recent years. We have moved to multiple cameras in phones with most phones coming with high resolution sensors (going as high as 108MP, with 250MP cameras coming soon), ultra wide angle sensors, telephoto lenses, macro lenses, periscope zoom cameras and depth sensors. So, it’s clear that the camera hardware in smartphones is capable, but the stock camera apps that you get in smartphones might not necessarily produce the best results or come with pro grade features like full manual control. So, if you own a Xiaomi/Redmi/Poco phone, or a Realme smartphone, or say, a Samsung phone or basically any other smartphone and you are looking for a third party camera app, you have come to the right place. Mentioned below are the best camera apps for Android you can install on your phone: 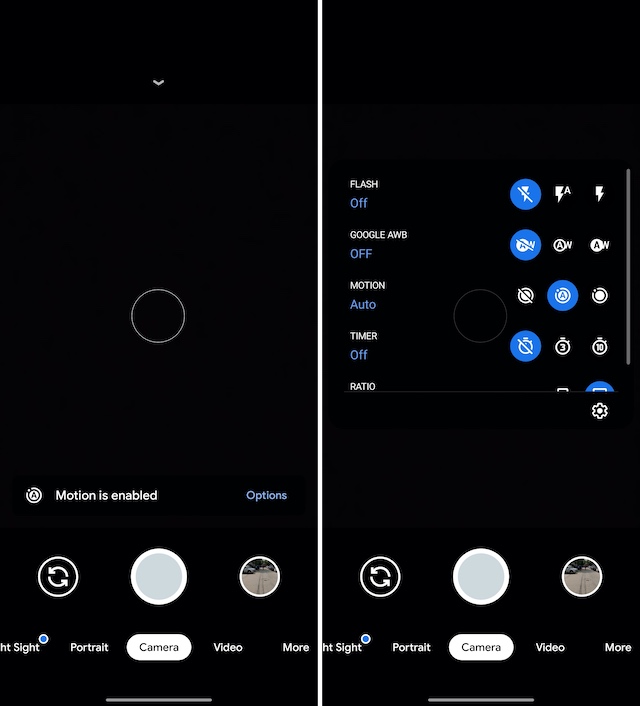 Google Camera aka Gcam Mod has to be the most popular third party camera app out there and it’s an app that’s not available on the Play Store. Gcam Mods are basically modded versions of Google’s camera app for different smartphones out there. Gcam does not bring manual controls but it makes up by bringing superior picture quality (in most cases), thanks to Google’s camera algorithms and Pixel’s camera features like the great portrait mode, astrophotography mode, Night Sight and more.

Now, like I mentioned, the Google Camera app isn’t available officially, but we have a dedicated guide on how you can install the Gcam Mod on any Android device out there, so you should check it out from the link below. 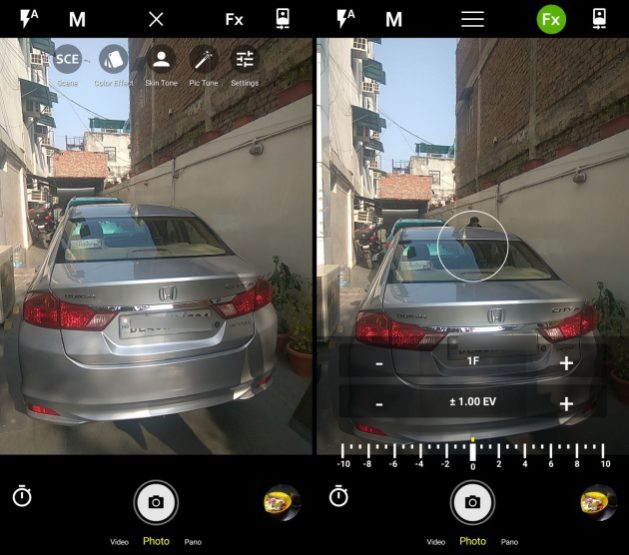 And it’s not only the manual controls, this app also builds on the basic controls and offers you cool features such as panorama, virtual horizon, multi-exposure shots, timed shots for time-lapses and GIFs. It is monetized by ads, which you can turn off and then donate to the developer to help them actively work on building new features into this app.

Key Features: You not only get the complete set of manual controls, but add-on features such as multi-exposure shots, time-lapses, and GIFs. 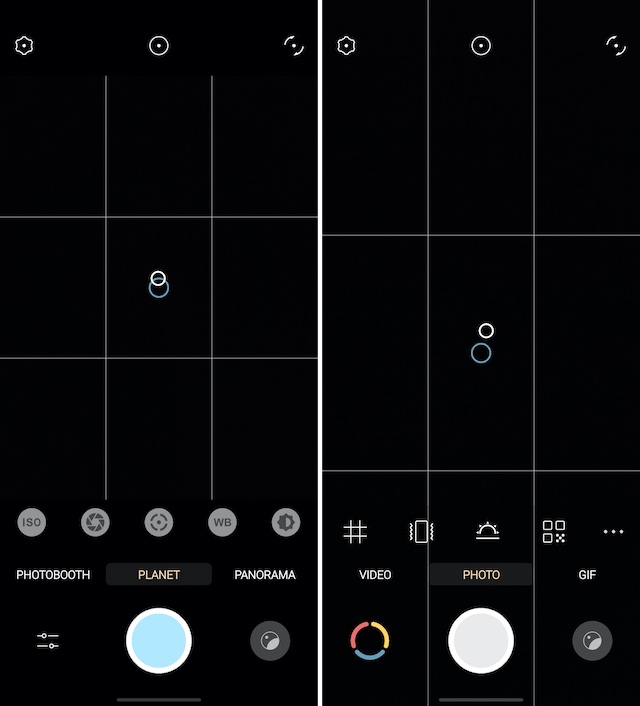 Next up on this list is Pixtica, which is a fairly new camera app for Android and it’s one of my personal favorite apps out there. The reason I like Pixtica is because unlike a lot of other camera apps on this list, this brings a very good looking and modern UI with all the great features. It has support for manual controls, so you can adjust the shutter speed, ISO, focus, exposure and white balance on supported devices. All of that in a really nice UI.

The features don’t end here. Pixtica also includes a QR code scanner, shows you the magic hours and comes with a video editor built in.

Key Features: Modern UI; manual control on supported phones; Interesting modes that really add to the experience and a lot of unique features. 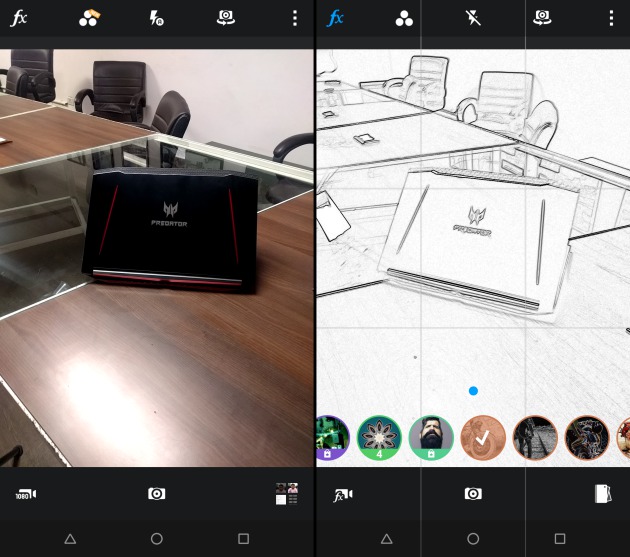 It is not manual controls or Pro mode that everyone desires. An average user is looking for a snappy camera app that captures great pictures while offering a few add-on features to top off their experience. Camera MX has been nailing this for years and is one of the most popular camera apps among newbie photo enthusiasts.

Camera MX is all about simplicity, which shows in the clean and snappy interface. You get various camera modes, to not only capture the ideal photo but also videos. The highlight of the app is “Live Shot mode” which lets you create your own GIFs and the robust photo editor that’s been baked right into the app.

The developers are super active and have been keeping Camera MX up-to-date in order to fall in line with today’s standards. 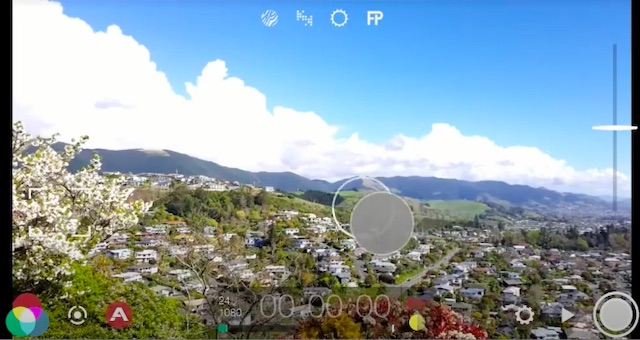 I am sure you have heard about Filmic Pro, especially the iOS version of it, which packs in some really interesting features. Well, the app is also available on Android and while it’s not as good as its iPhone counterpart, it’s a great app for smartphone videographers. Yes, it’s the most expensive app on this list but it includes features like support for true LOG gamma curve control, the ability to adjust live shadows, highlights, saturation and vibrance while shooting a video. Yes, these features aren’t supported on every single phone out there but these are pro-grade features you won’t find in any other camera app.

The app also has advanced audio recording support, support for third party hardware and all the shooting modes you can think of and supports the different frame rates supported by a phone hardware. 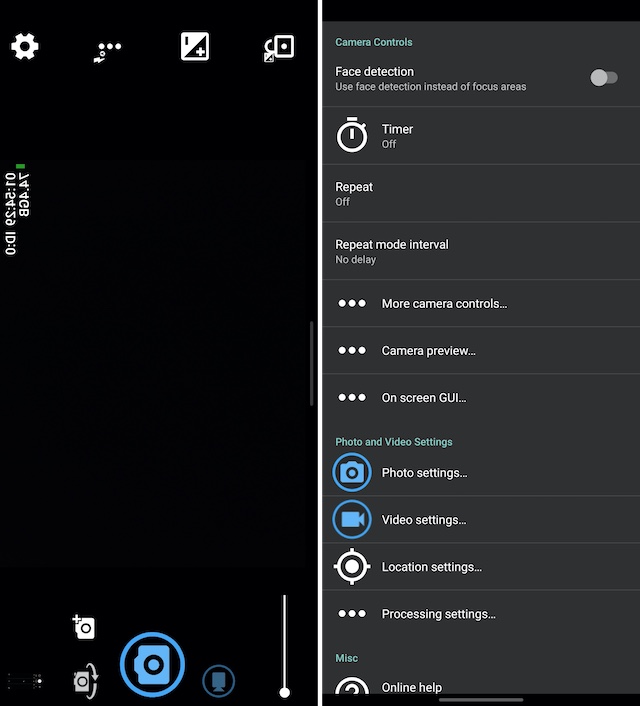 Open Camera is a free, open source camera app that might not have the most attractive of UIs but it does bring a slew of features and control. For example, the app brings pro controls like focus peeking, histogram support, focus assist, RAW DNG support, ISO, exposure compensation/lock, and focus bracketing mode. Now, all of these manual controls work great (some are limited to Camera2API supporting devices) but that’s not everything, Open Camera is one of the most customizable camera apps. You can customize the interface to include different modes and controls of your choice and even configure the volume buttons for different functionality.

Apart from these, Open Camera brings a lot of other features like an auto stabalize feature that makes sure photos are level, remote controls, different scene modes, different time stamps for photos, HDR, noise reduction and more.

Key Features: Free, Open-source with no ads; Manual controls as well as a customizable UI and different photo saving options and tools.

Apart from all these camera apps, we have used different camera apps in the past like the Camera FV-5, Footej Camera (unavailable now), Manual Camera and ProShot, but these are apps that haven’t been updated since a year or two now and they do seem outdated. 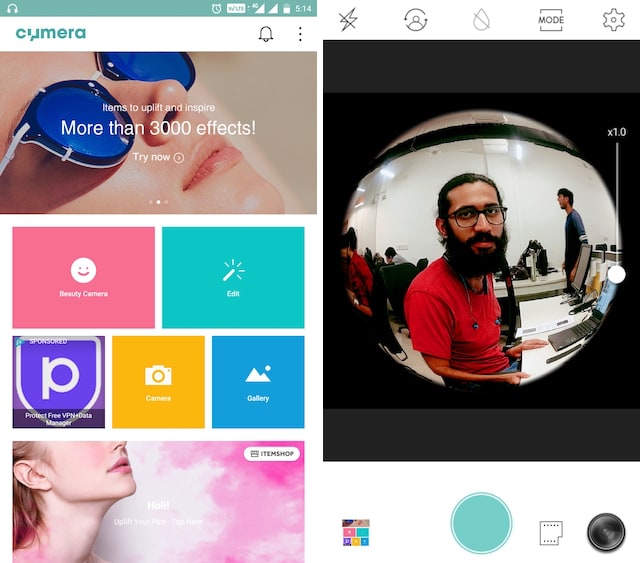 The interface is also pretty easy to use. You get big colored blocks each of which hides one single feature. You can click on the blocks, and depending on the feature the block represents, it will either open the camera or the gallery app. This makes it very easy to use a feature as all the settings come pre-applied. For example, if I tap on the beauty camera mode, it will open the camera with all the beauty settings applied.

Apart from the above-mentioned feats, Cymera also allows users to use trendy AR stickers including animal face, air shape, love stickers, beauty filters, light effects, and frame. Users can also use text input to add text and even convert photos into memes. If you want a camera app which focuses on these things, definitely give this one a try.

Key Features: You not only get a complete set of beauty controls but you also get access to AR stickers, text-input, collage making, and more. 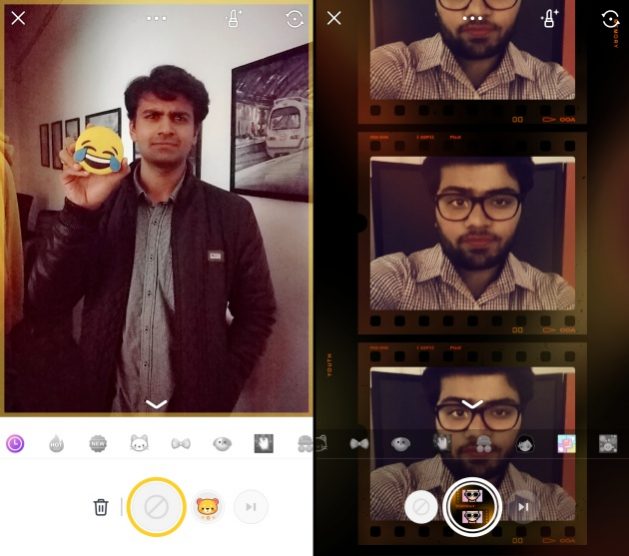 If you’ve been an Android user for long, you’d know that 360Camera is one of the most renowned camera apps on the Play Store. While it was once known for its fully fledged camera features, the app has been redesigned to cater to the needs of the social frenzy millennial population.

You’re now offered a selfie and beauty camera, with pro image editing tools, as well as a plethora of cool stickers, AR face masks similar to the ones seen in Snapchat, art filters, and poster templates that’ll allow you to jazz up your pictures. You also get the ability to create photo collages and grids, along with customizable and filtered videos.

Key Features: If Snapchat and Instagram filters are your jam, you’d definitely like what Camera360 has to offer. 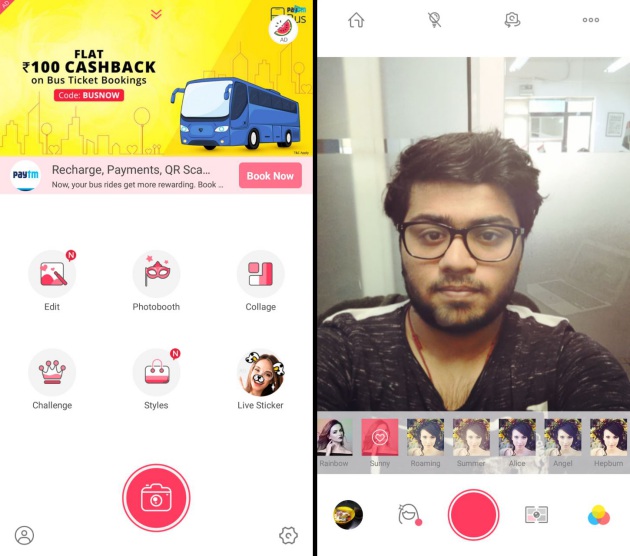 The selfie craze is not only limited to hardware innovations, but has also trickled down into Android apps such as Sweet Selfie as well. The Gen-Z’s obsession with selfies has now pushed them to embrace beautification apps. All they want now is to look the best for Instagram posts, so the world can take notice of them.

Sweet Selfie, which was previously known as Candy Camera, is one of the overly popular apps that has fueled this craze and now has over 100 million downloads. The app has now gotten a visual makeover (with a homescreen) and loads of smart selfie modes, filters, and other fun features to make it stand out from the competition.

This app allows you to put in less effort into clicking the selfies and later editing it with the smart auto-beautify mode, emojis, stickers and typical vintage filters. It adds to the whole fun by bringing a social touch, in the form of special contests, to the users.

Key Features: Smart auto-beautify mode and fresh filters, along with the contests make this a well-made camera app for casual users. 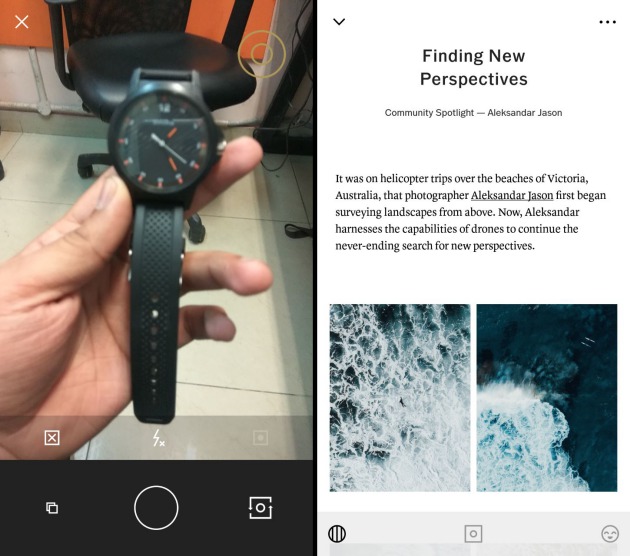 VSCO is yet another gem from the past. It has been present on the Play Store for quite a while, offering you the capability to shoot and edit pictures on the fly. The app is loaded with film-inspired presets and advanced camera controls, which let you change the contrast, brightness, highlights and more.

While many users believe that the main highlight of the VSCO app is its wide set of photo editing features, but I think it’s the social component that has been built around the app.

You’re no longer just clicking pictures and storing them away in your gallery, but have the choice to share it with the world and build a community around your work. You’re also free to explore other people’s artworks and follow them for inspiration if you like.

Key Features: Great filters and photo editing features, coupled with a social network to show off your creative artworks. 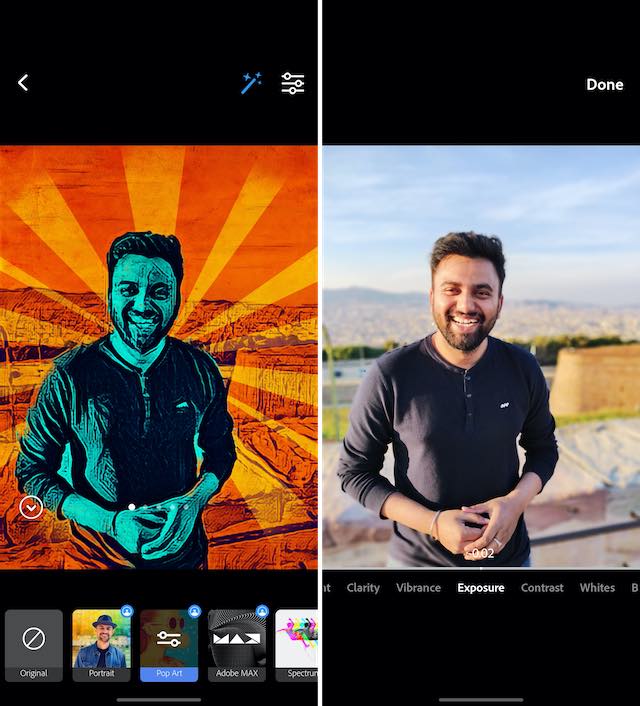 Adobe recently announced its Photoshop Camera app and while it’s still in “Pre-Register“, you can sideload the app to check out what the fuss is all about.  So, Adobe Photoshop Camera is said to be an AI-based camera app that uses Adobe’s content awareness algorithms to detect the objects in your photo and then suggest filters accordingly. The app has more than 80 custom filters and they work in real time. You can check out the different filters in the camera viewfinder or you can just take a photo (or pick one from the Gallery), and the app will suggest you different, cool filters. Along with these really interesting filters, the app also lets you quickly adjust the shadow, highlight, clarity, exposure, saturation and more. I mean, it’s “Photoshop” Camera after all.

Like I said, the Adobe Photoshop is still not available on the Play Store, so the experience isn’t the best, but you can check it out for the fun filters it offers.

Key Features: AI-suggested filters based on content awareness; Different editing options that can be accessed quickly.

Top Camera Apps for Android in 2020

Even after having a powerful lens on your smartphone, it all boils down to the app you’re using to click pictures/ videos and your experience as well. We hope you’d have found the app which suits your needs, be it jazzed-up portraits, funky masked selfies or that picture perfect moment you’ve always wanted to capture on your phone. Which app did you pick and why? Be sure to let us know in the comments below.

12 Best iPhone Camera Apps You Should Use