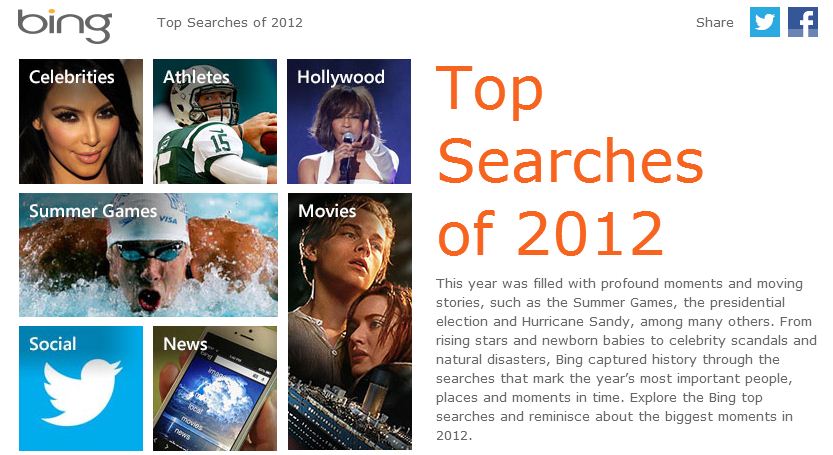 We are about to complete the most hyped year ever, the year 2012. A lot has happened over past 11 months and it is the perfect time to have a look back at the most noticeable stories of 2012. So, Here we have Bing’s yearly report mentioning the most searched queries of 2012 in various categories.

Starting from the most searched news story, Launch of iPhone 5 proved to be the most talked about event of 2012, followed by presidential elections in US and list closes with Facebook’s IPO offering news.

In Social Media, Facebook is ranking at the top, followed by Twitter and Myspace (surprise!) and In Consumer Electronics, as expected iPhone 5 is at the top.  In top 10 list, 5 products are from Apple only.

When it comes to most searched person of the year no one can beat Kim Kardashian, She is among the top 2 since 2010. This year list starts from Kim Kardashian followed by Justin Bieber and closes at Taylor Swift.

You might have guessed the song on first spot, which is Gangnam Style -Psy followed by Call Me Maybe -Carly Rae Jepsen and the list closes at Part Of Me -Katy Perry.

There are top 10 searches in other categories too. Here’s the Link. If you want to see.