Whether it’s for storage, or for backing up your Windows or Mac computer, external storage devices are pretty useful. While you can pick up an external hard disk for pretty cheap these days, external SSDs have also gotten a lot more affordable as well. So, if you’re looking to buy a portable SSD for your laptop here are the 5 best external SSDs you can buy in 2020:

SSDs vs HDDs: Why is an SSD Better?

Before we take a look at the external SSDs you can buy in 2020, let’s talk briefly about why you should consider an SSD over an external hard disk without getting too into the woods about the technical differences. Here are some reasons why SSDs are in-general better than hard disks for storage:

There are also two different types of SSDs you will find: NVMe SSDs and SATA SSDs. While NVMe SSDs offer considerably higher speeds than solid state drives using SATA interfaces, they are also usually priced higher than SATA SSDs. At the end of the day, it’s all about the price-performance trade-off you’re willing to make in your purchase.

The first SSD I’m putting on this list is the Samsung X5 SSD that comes with Thunderbolt 3 for speeds you’d normally expect to see on internal SSDs. The X5 is also an NVMe SSD at its core, but the reason it’s almost twice as fast as the other NVMe SSDs you’ll find on this list is because it’s using Thunderbolt 3 instead of USB 3.2 Gen1 or USB 3.2 Gen2 interfaces. 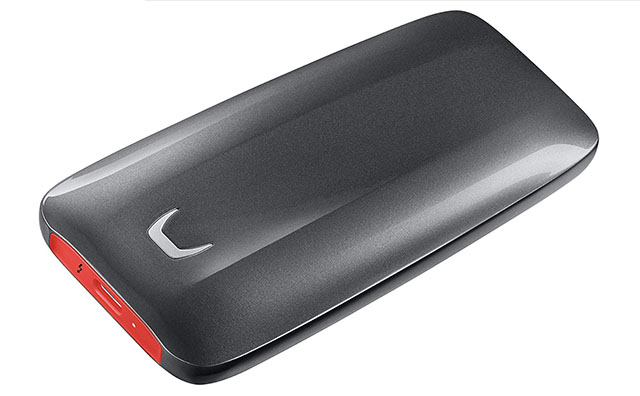 Bear in mind that the SSD will only work if your laptop has a Thunderbolt 3 port, like the new MacBook Pros, and some Windows laptops. Having a USB Type-C port will not give you the promised speeds here because even if your system has a USB 3.2 Gen2 Type-C port, it still only has a bandwidth of 20Gbps, which is half that of what Thunderbolt 3 offers.

The Samsung X5 SSD is a lot more expensive than most other options you’ll find on this list, but if you’re looking for speeds well over the 2,000MB/s mark, the Samsung X5 is definitely one of the best portable SSDs you can buy right now.

The SL100 Pro from Lexar is an NVMe SSD that brings read speeds up to 950MB/s and write speeds up to 900MB/s which is almost twice the speeds offered by SATA SSDs like the Samsung T5.

The Lexar SL100 Pro comes in a small, portable package that should be easy to carry around, weighing in at just around 69g. The SSD has a USB Type-C port for connectivity, but Lexar ships both USB Type-C to Type-C and USB Type-C to Type-A cables with the SSD so even if your laptop doesn’t have a USB-C (or Thunderbolt 3) port you will be able to use the SSD without needing any adapters. 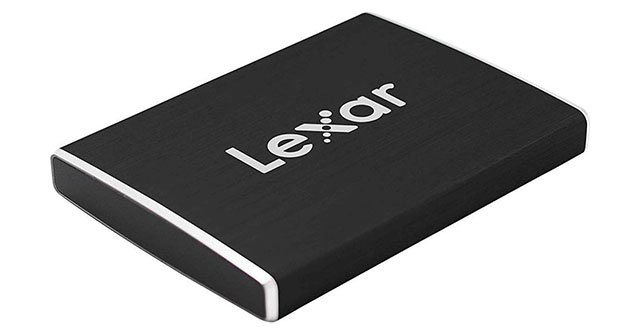 However, bear in mind that you’ll only get these high read/write speeds if your laptop supports USB 3.1 Gen 2. With a regular USB 3.0 port, you’ll be limited to speeds somewhere in the ballpark of around 400MB/s to 500MB/s because of bandwidth limitations.

You can get the Lexar SL100 Pro in both 512GB and 1TB variants, and the company also offers a limited 3 year warranty on the SL100 Pro external SSD.

Crucial is one of the biggest names when it comes to storage devices. You might have heard of Crucial if you have ever looked for RAM sticks, or internal SSDs or HDDs for your tower PC. The X8 from Crucial is a portable external SSD that uses NVMe instead of SATA, and is claimed to support read/write speeds of 1050MB/s.

The Crucial X8 also comes in a small, portable design that’s almost the same size as the Apple Magic Mouse. Plus, it has a durable build with an aluminium core, it can tolerate extreme temperatures, it’s shock and vibration proof, and it’s also supposed to be drop-proof from up to 7.5 feet. 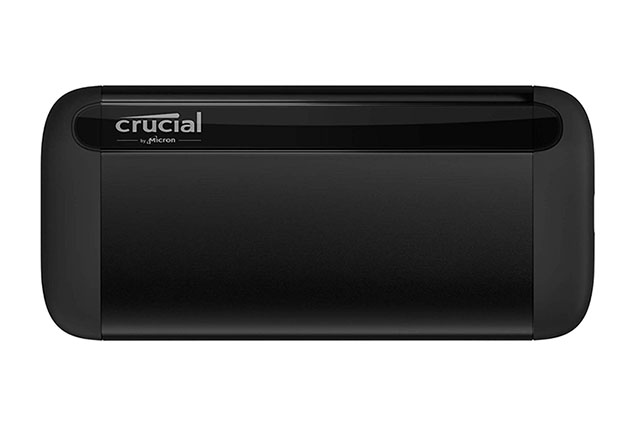 The Crucial X8 is available in 500GB and 1TB variants, and the company offers a 3 year limited warranty on the SSD.

For people who need a more rugged storage solution for their data, one that’s protected against accidental drops and possible exposure to water and dust, the SanDisk Extreme Pro SSD is definitely the one to go with.

This is also an NVMe SSD, so you get really fast read/write speeds up to 1050MB/s (according to SanDisk), and it comes with a rugged design that’s also IP55 rated for water and dust resistance. Moreover, the SSD comes with a shock-resistant core and is also protected against vibrations. 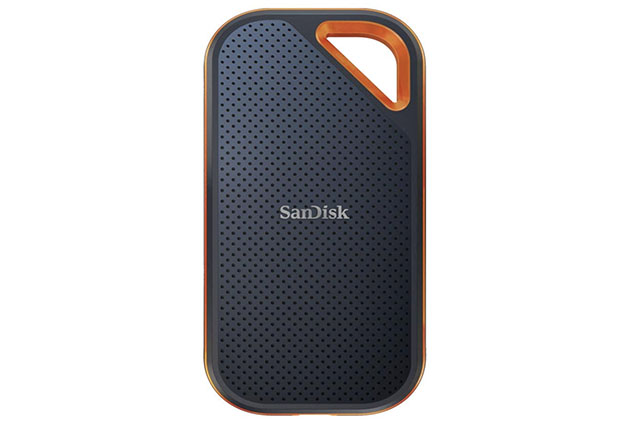 The SanDisk Extreme uses USB 3.2 Gen 2 to support these speeds which means your system needs to have support for this standard as well if you want the maximum speed available. The SSD does ship with a USB 3.2 Gen 2 Type-C to Type-C cable along with a Type-C to Type-A cable as well, so you can connect it to USB-A ports if needed.

If you’re looking for a rugged SSD, but you don’t really need the faster speeds offered by NVMe options in the market, SanDisk also has a SATA based variant of the SanDisk Extreme that offers speeds up to 540MB/s.

Another SSD you can consider buying for your storage needs is the Samsung T5 Portable SSD. This is one we use at the Beebom office a lot for our video team’s storage requirements, and it’s battle tested for sure.

The T5 from Samsung is a SATA SSD, though, so you’ll get read/write speeds of up to 540MB/s with this SSD using the USB 3.2 Gen 2 Type-C to Type-C cable that’s included in the box. There’s also a Type-C to Type-A cable here for connecting the SSD with devices that don’t have a Type-C port. 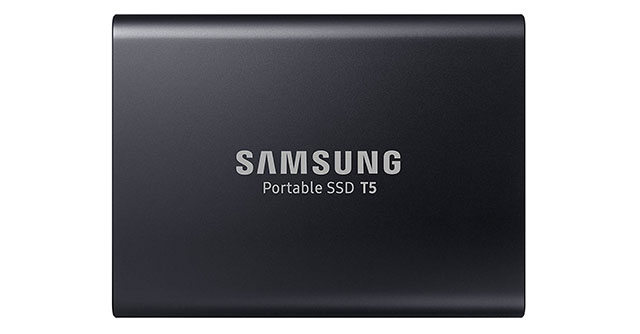 Samsung’s T5 SSD is comes inside a metal casing and it’s fairly durable, plus its small size is definitely a positive when it comes to portability and easy of carrying it around.

That said, Samsung just launched the T7 Touch Portable SSD at CES 2020, and it comes with faster read/write speeds of up to 1,050MB/s. Moreover, it comes with a fingerprint scanner built-in along with AES256 encryption, so your data will be even more secure. The company hasn’t announced the price for the SSD yet, but it will be available this month itself, and we’ll update this article when the price is out.

Those were the best external SSDs you can buy right now. There are some others you can check out as well, including the Seagate Fast SSD ($169), and the WD MyPassport ($149.99) both of which are SATA based SSDs that offer speeds up to 540MB/s. While you can choose to go with either NVMe or SATA based SSDs for your storage needs, you should know that while SATA based SSDs are relatively more affordable, NVMe drives will offer much faster transfer speeds. Moreover, if you get an SSD that uses Thunderbolt 3, you’ll get the fastest speeds while transferring data.

So, which external SSD are you planning on buying and what’s your use case for it? Also, if you think I missed out on mentioning a great external SSD that should’ve been on this list, let me know in the comments down below.

This External SSD Has 16TB of Storage Space and Costs Nearly $3,000

Seagate One Touch vs Samsung T5: Which Portable SSD Should You Buy?