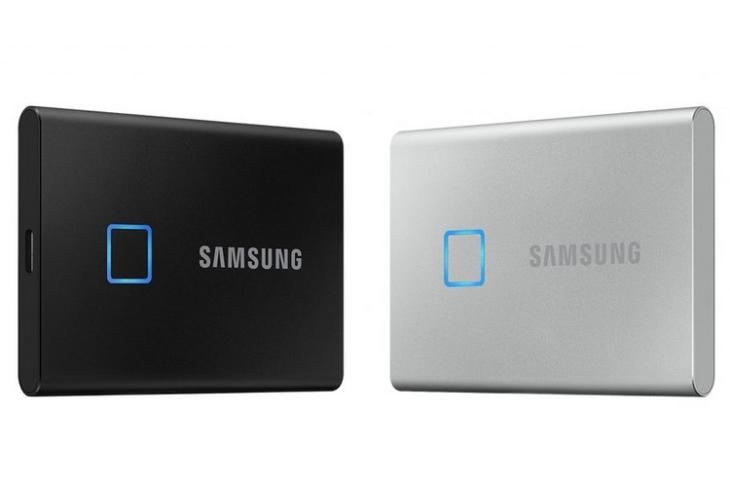 When it wasn’t messing up with embarrassing gaffes, Samsung was unveiling some really cool tech at the ongoing CES 2020 expo in Las Vegas, including the Ballie robot, artificial humans, truly bezel-less televisions and more. One more addition to that list is its latest external storage device – the Portable Solid State Drive (SSD) T7 Touch – which the company claims combines a sleek, compact design with fast transfer speeds based on the USB 3.2 Gen 2 standard.

What makes the new devices truly stand out from other products in the market is a new biometric authentication system that is expected to improve data protection with an additional hardware security measure in the form of a built-in fingerprint sensor. According to the company, the T7 Touch brings the first built-in fingerprint scanner to Samsung SSDs on top of password protection and AES 256-bit hardware encryption.

Apart from the new feature that made it a ‘CES 2020 Innovation Award’ winner, the T7 is also said to be 94 percent faster than previous generation drives with read speeds of up to 1,050MB/s and write speeds touching 1,000MB/s. The drive comes with a USB Type-C-to-C cable and a USB Type-C-to-A cable, and is compatible with Windows, Mac and Android operating systems. It also offers on-the-go versatility, thanks to its sleek, titanium casings in black and silver finishes.

Samsung is offering the T7 SSDs in three different storage options, including 500GB, 1TB and 2TB. They will be available starting this month in over 30 countries worldwide, and are coming to India in February for Rs. 11,999, Rs. 18,999 and Rs. 36,999, respectively. The company also said that the portable T7 models are expected to be launched in the second quarter of this year.