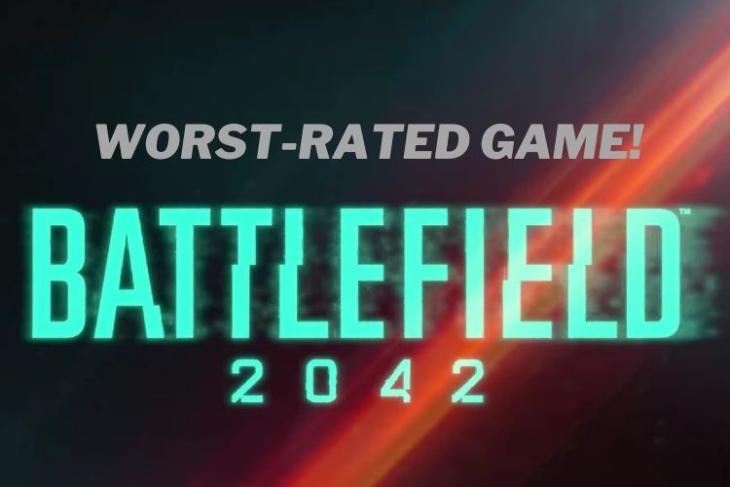 Following the early release of Microsoft’s Halo: Infinite multiplayer beta, EA also released its much-awaited FPS title, Battlefield 2042, last week. Although the company had high expectations from the game, EA is presumably disappointed, as Battlefield 2042 went on to become one of the lowest-rated titles on Steam right after its release. The title currently has only 27 percent positive reviews on Steam and has established its place on the list of 100 worst-rated Steam games of all time.

Now, if you have been out of the loop, Battlefield 2042 was initially announced at E3 2021 earlier this year. The title was supposed to come out on October 22. However, shortly after EA released the minimum and recommended system requirements for the title, it was delayed and the developer announced that Battlefield 2042 will be released globally on November 19.

Now that the game has been released in the market, it seems like players did not like it as much. The title received close to 40,000 reviews on Steam as players started to try out the game. However, out of those reviews, 73% are negative. This means that the game received positive reviews from only over 10,000 players on Steam, which is pretty disappointing. Furthermore, the game currently sits in the #10 position on the list of 100 worst-rated Steams games of all time by Steam250.

According to reports, players have faced serious issues in the game regarding game mechanics. Many players even reported that the game lacks weapons and is riddled with in-game bugs, amongst other issues. Moreover, as DICE, the developing company of the title has delayed the update to fix the title’s issues, players are becoming frustrated with the experience.

Now, it is worth mentioning that PC is one of many other platforms on which Battlefield 2042 is available. The title is currently available for many other gaming devices such as the Xbox Series X/ S, Xbox One, PlayStation 4, and PlayStation 5.

So, if you are planning to try out EA’s latest action title or have already played it, let us know about your experience in the comments below. Also, do let us know your thoughts on the India-based Discarded map in Battlefield 2042.