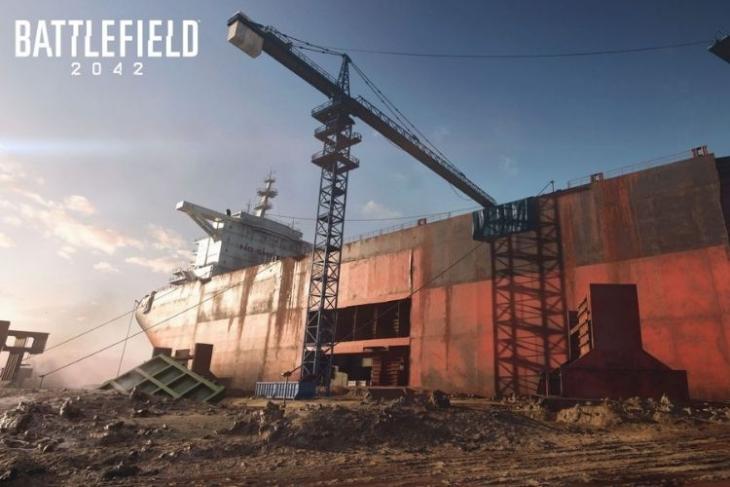 After revealing the minimum and recommended system requirements of the title, EA recently disclosed some interesting details about Battlefield 2042. It is about a new map named ‘Discarded’ in Battlefield 2042. This map is based on a town in the Bhavnagar district on Gujarat, which is located in India. So yeah, there will be a dedicated map based on the Indian setting in EA’s upcoming title.

The company released a trailer for Battlefield 2042, showcasing every map in the game, including the Discarded map. It showcases a place called “Alang”, which is located in the Bhavnagar district of Gujarat.

The initial shots in the trailer give us a bird-eye view of the location. The map is spread along a coastline where gigantic ships are stranded. Quick fact, the town in real life is the world’s largest ship graveyard, and the world’s longest ship Seawise Giant was sailed and then demolished in this town in 2009.

Back to the Battlefield 2042 India map, the middle area contains the Colossus, which is again a huge ship carrying a stealth submarine inside. Dice revealed that this ship has multiple levels and capture locations, including access to zipline from both inside and outside.

Following the same shoreline players will find themselves in several other docking ports filled with crates and more ships. Additional locations include a flood-hit village and gas station. The main motto is to secure the nuclear assets which I am sure has to do a lot with that stealth submarine.

As per the description of the map on the official website, players will be able to explore “a strategic section of India’s west coast” and be able to “fight among the hulls of these behemoths while adapting to deadly storms.” So, as you can imagine, it will be a pretty intense map in the game. You can check out the official website for more details and the trailer for a first look at the map:

Following the reveal of the Discarded map, IGN India reached out to Dice to know more about the developers’ thought process behind the India-based map in Battlefield 2042. So, as per lead level designer Shashank Uchil, the company was aiming to create a map based on India for a long time.

“Both the art and design team spent a considerable amount of time researching how ships are broken at Alang and how the town around it is built,” Uchil said in a statement.

“We spent a lot of time looking at videos and satellite images from all around Alang. One example would be the side of the ship being torn apart, which you can find in the Reveal Trailer at 0:55.” he further added. Battlefield 2042 is making its way to the market on October 22 and will be released on all major platforms, including PS4, PS5, Xbox Series X/S, Xbox One, and of course, PC. It is currently up for pre-order on Steam, Origin, and Epic.