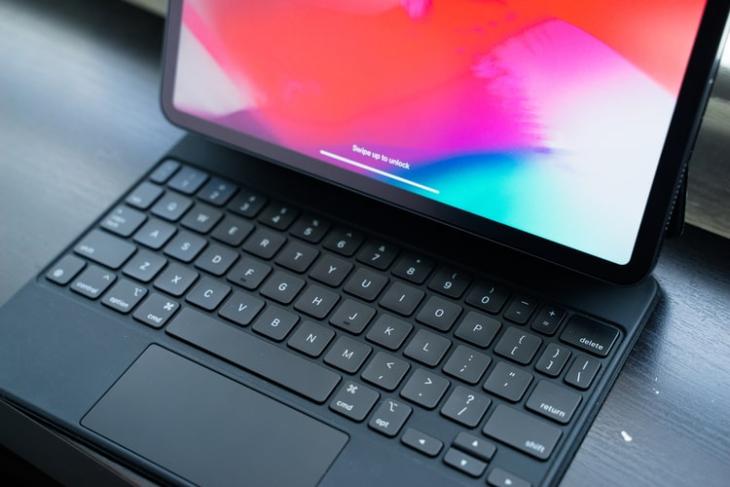 Along with the 2020 iPad Pro, Apple launched a new Magic Keyboard that holds the iPad in a floating position. We saw Apple SVP Craig Federighi demo the accessory in a video right after its launch. However, a report later suggested that users were facing significant battery drain issues with the Magic Keyboard. So, as per a recent patent, Apple might release a new Magic Keyboard for future iPads without a floating-hinge mechanism.

The patent titled “Sliding Input Device Cover” was filed by Apple back in July this year. It explains an accessory for a computing system, featuring an input device that is “slidably movable yet attached to the cover or case.”

So users will be able to place their device on top of the input device, which is the slidable keyboard, and the keyboard will adjust based on the position of the attached hinge. There is also a dedicated trackpad right below the keyboard. You can check out the patent image of the accessory right below.

Now, if you are unaware, the current Magic Keyboard for iPad Pro consists of an angled hinge to place the iPad device. Upon magnetically connecting the back of the iPad to the hinge, the device floats above the keyboard. Users can also adjust the position of their Apple device by physically adjusting the hinge angle.

The accessory that Apple explains in its patent does not feature a floating hinge like the current model. However, it has a slidable keyboard that slides in or out depending on the position of the non-floating hinge. Now, although Apple filed a patent for the iPad accessory, it does not mean that the company will go ahead and release the product in the market. So, we’d suggest you take this information with a grain of salt.