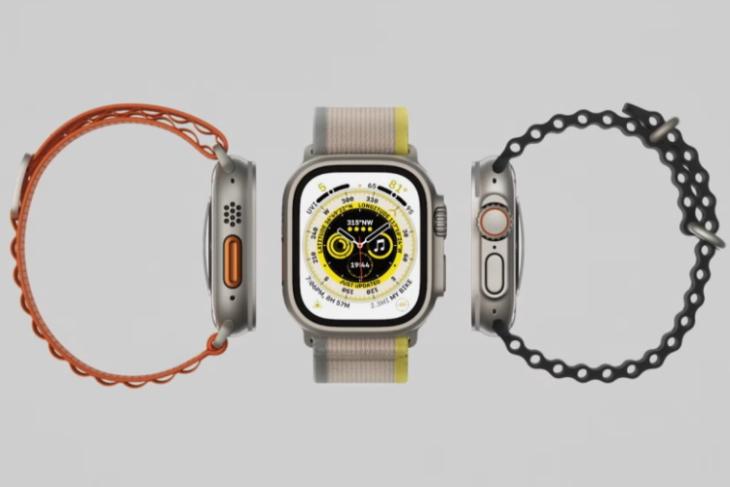 Alongside the Apple Watch Series 8 and Watch SE 2, the company has also launched its new, much-rumored rugged smartwatch today. It’s called Apple Watch Ultra and is designed for users who love outdoor exploration and extreme sports. It comes with a new and premium design, a bigger display, exclusive new features, and much more. So let’s take a look at the complete details.

Starting with the design, Apple Watch Ultra boasts an aerospace-grade titanium case to provide users with a more durable and corrosion resistance build. Not just that, the case is now bigger at 49mm and is raised to surround the edges of the bigger new display, which is flat in comparison to the rounded display on the standard Watch 8 and older models.

Now, in true Apple fashion, the company did not share the screen size on the stage, so you will have to wait for the product page. But, the official blog post reveals that the Retina display onboard here is 2x brighter than any Apple Watch model and supports up to 2000 nits of brightness. And there’s a sapphire crystal protecting the display here.

Moving to the highlight of the Apple Watch Ultra, it now includes a new Action button (painted in high-contrast international orange) on the left edge. This is in addition to the raised button and the larger Digital Crown on the right, which would be easier to use even while wearing gloves, states Apple. The new Action button will give you “instant access to a variety of features, including Workouts, Compass Waypoints, Backtrack, and more,” as per the blog post.

If you thought we are done with the design yet, well, no. Apple Watch Ultra also comes with all-new bands designed for different extreme outdoor sports users in mind. There’s a Trail Loop for athletes and runners, Alpine Loop with high-strength yarn and G-hook, and Ocean Band for users who like extreme water sports and recreational diving.

Under the hood, Apple on stage said that Watch Ultra is powered by the S8 chip, which is an upgrade over the previous-gen S7 chip, but it didn’t share any numbers. Moreover, you now have precision dual-frequency GPS support (integrates both L1 and L5 frequencies) for more accurate positioning. You also have new pro running features, and dedicated compass and depth gauge apps. The other new features like the temperature sensor and Crash Detection remain the same as Watch Series 8 and watchOS 9.

You can quickly check out the specs and features of the Apple Watch Ultra in this roundup right here:

As for the battery life, Apple announced that you can easily get up to 36 hours on a single charge. But you will be able to extend it up to 60 hours with a new low-power setting, which will be rolled out at a later date. Finally, as per the blog post, “Apple Watch Ultra is certified to the relevant aspects of MIL-STD-810H,” WR100 for underwater adventures, and “EN 13319, an internationally recognized standard for dive accessories.”

The Apple Watch Ultra is priced at $799 in the US. You can order this rugged smartwatch today, and it will be available to buy starting 23rd September. We will be sharing the India prices of all Apple Watch models in a separate article, but the Watch Ultra costs a whopping Rs 89,990 in India. Are you someone who would rock the Apple Watch Ultra? Let us know in the comments below.