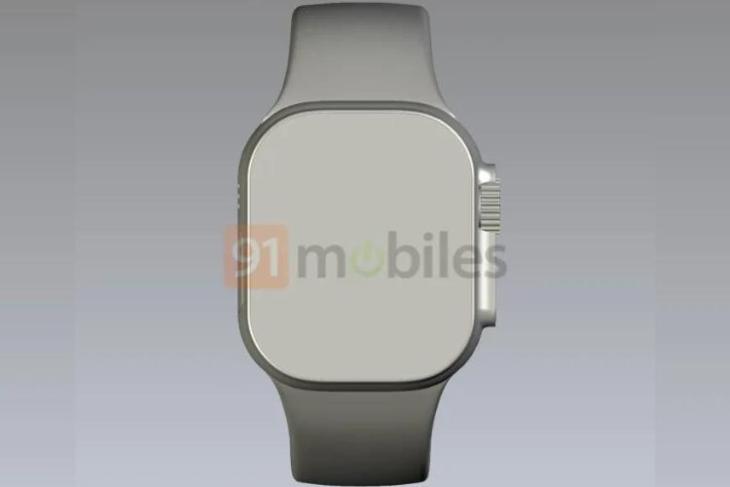 Apple will finally launch the much-rumored iPhone 14 series at its “Far Out” event tomorrow and we are also hoping to see the AirPods Pro 2 and even the new Apple Watches. Rumors have indicated that a high-end Apple Watch Pro will be introduced this time, and we now have a possible look at its design, which will be something new!

A few CAD renders of the Apple Watch Pro have appeared (courtesy of 91Mobiles) and they show off a large, flat display with really thin bezels. It is believed to be 49mm in size, the biggest for Apple yet.

The right edge houses the Digital Crown, the mic, and another button, all residing in a protrusion. What’s interesting is that there’s an extra button that is seen on the left side of the frame. While there’s no word on what functionality it will serve, it is likely to be for easy access to various features and will be helpful for sports enthusiasts, which is the watch’s target audience after all.

Bloomberg’s Mark Gurman validates this information with a tweet, further giving us a feeling that this is what the new Apple Watch Pro would be like. Past details have hinted at a rugged titanium chassis. A larger display was rumored previously too and the smartwatch is speculated to feature a large battery with support for a low-power mode.

Gurman has also suggested that Apple might introduce exclusive bands and watch faces specifically for the Watch Pro to “play into the extreme sports theme.“

There may be room for satellite communication functionality, body temperature, and more along with various health features. The price is expected to be on the higher end, possibly matching what the iPhone 13 costs!

There Could Be More Apple Watches!

Besides the more expensive new Apple Watch model, Apple is also expected to introduce the standard Watch Series 8 and the affordable Apple Watch SE 2. Both are expected to look similar to their successors and come with an S8 chip. Some improvements on the battery part, health features, and performance are also expected.

In addition, a rumor (via 9To5Mac) about a more affordable Apple Watch has also cropped up. An Apple Watch “cheaper than the Watch SE” may be announced at tomorrow’s “Far Out” event to target young users. It could support the Family Setup feature, the ability to use cellular connectivity without an iPhone. However, not much is known about the product and we are not sure if this will actually see the light of the day.

Since details are still unclear at the moment, it’s best to wait until tomorrow’s Apple event to a proper idea of its upcoming products. We will be covering the event live, so, stay tuned to this space.