As useful and impressive as the Apple Watch is, it’s still a piece of technology and it sometimes faces issues that can be both annoying and terrible at the same time. So, if you’re facing an issue with your Apple Watch that has left you flabbergasted, here are 12 common Apple Watch problems and their fixes.

1. Apple Watch Doesn’t Turn on When Wrist is Raised

One common issue that I’ve seen people encounter is that their Apple Watch doesn’t turn on when they raise their wrist. This is definitely an annoying issue, but usually it’s got a simple solution:

Check if Wake Screen on Wrist Raise is On

This might sound like silly advice, but a lot of times people don’t realise that the feature might be turned off on their Apple Watch. So first off, check if it’s enabled or not. 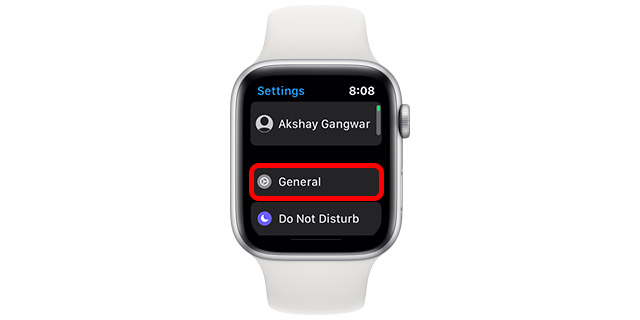 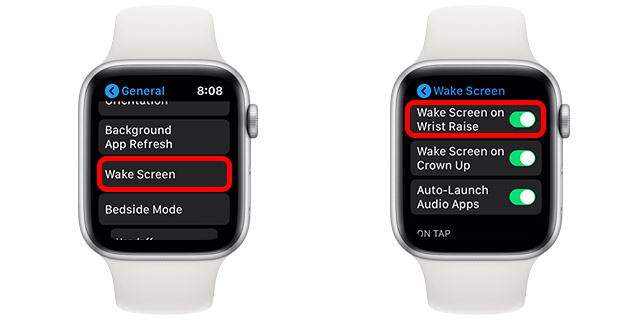 You can also check this from your iPhone by the way. Just follow the steps below: 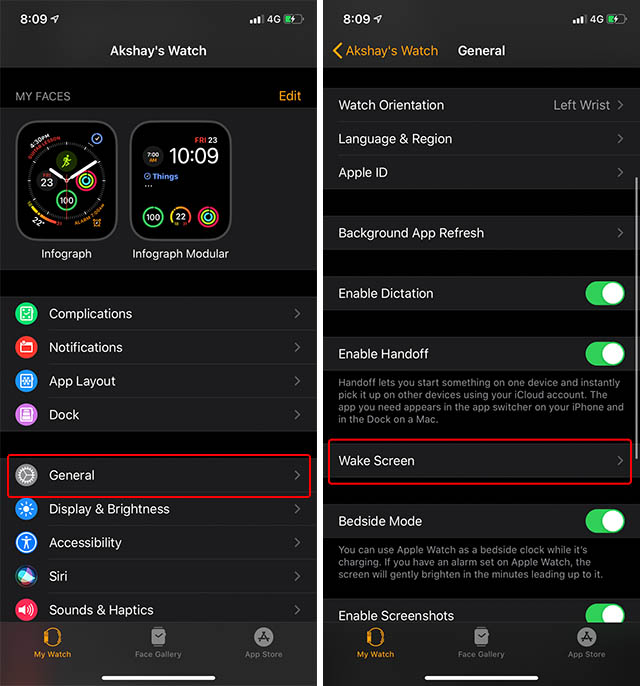 If the feature is turned on on your Apple Watch, the next logical step is to check if something is interfering with it — that’s where Theater Mode comes in.

Open the Control Center on your Apple Watch and check if the Theater Mode is enabled. I have marked the theater mode icon in the screenshot below, but if you like, you can check out our definitive guide to Apple Watch icons. 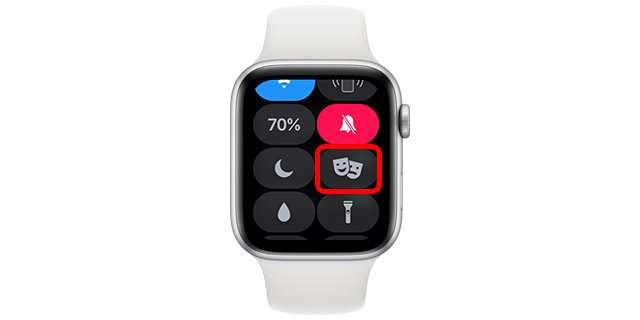 This is an issue that I have faced myself, and I’m including it here because I don’t want you to go through the trouble I did. So, if you’ve read your messages on your iPhone, but for some reason the Messages app on your Apple Watch is still displaying them as unread, here’s what you can do.

Restart both your iPhone and your Apple Watch. This is the kind of thing that usually fixes most issues with devices, and there’s no harm in trying this as one of the first steps.

Unfortunately, if restarting your iPhone and Apple Watch didn’t fix the issue, you’re left with no other option than to unpair your Apple Watch and then connect it to your iPhone all over again.

This is a very common problem. In fact, one that’s so common that we did a separate article on how to fix Apple Watch not connecting with iPhone issues. You should check that out.

This one might sound like the kind of issue that you can’t fix on your own, but actually you can.

It’s very likely that a software problem is causing the Digital Crown to not respond to rotations. Therefore, the first thing we’ll try is a simple restart. Just press and hold the Digital Crown and the side button until you see the Apple logo.

If the restart didn’t fix the problem, you may have to go with a more harsher solution. Unpair your Apple Watch from your iPhone and then pair it back again. This should solve any software issues that might be messing with the Digital Crown.

5. Notifications Not Appearing on Apple Watch

If your Apple Watch is suddenly not showing notifications, it could be a very annoying problem to deal with. Here’s what you can do to try and solve it.

Make Sure Watch is Unlocked

If you’ve set a passcode on your Apple Watch, the first thing to do is to check if your Watch is unlocked. For privacy reasons, the Apple Watch doesn’t show up notifications when it’s locked.

When the watch is locked you will see a padlock icon on the top of the watch. Otherwise, just tap on the screen and the watch should prompt you for the passcode to unlock it. 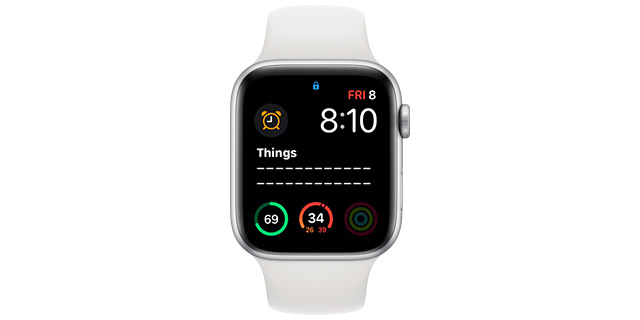 Just unlock your watch, and the notifications will start showing up again.

So you didn’t set a passcode on your watch, or it’s unlocked but still not showing notifications? Chances are Do Not Disturb is turned on. 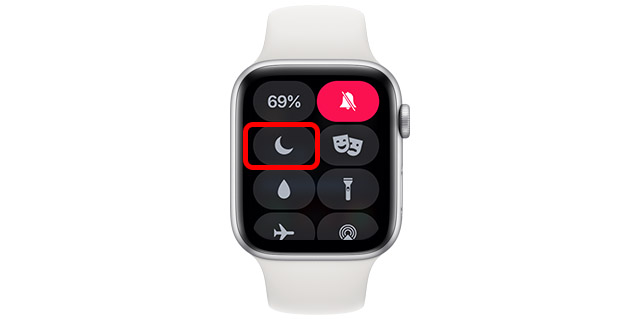 Note: If you turn on DND on your iPhone, it automatically turns it on for the Apple Watch as well (and vice versa).

If that wasn’t the problem either, make sure your notification settings aren’t causing the problem. 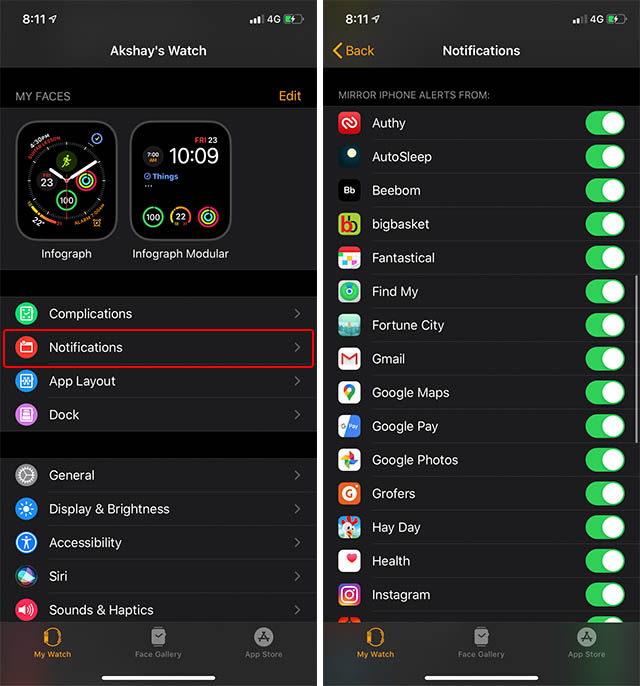 As a last resort, you can unpair your Apple Watch from your iPhone and then pair it all over again. This should resolve the problem.

I’m using a GPS-only version of the Series 5, but LTE Apple Watch users on the internet have reported a lot of issues with the watch having trouble connecting to cellular networks. Fixes that have worked for people facing this issue are as follows.

Check if you have any pending software updates on your Apple Watch. If you do, make sure you install the update. 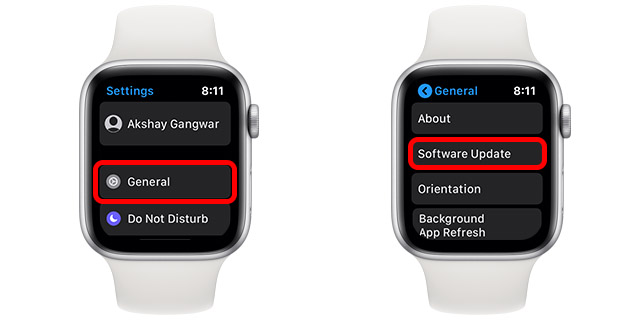 Sometimes a soft network reset can fix these issues. Open the Control Center on your Apple Watch and turn on Airplane mode. Wait for a few seconds and turn it back off. Does your watch connect to LTE now? 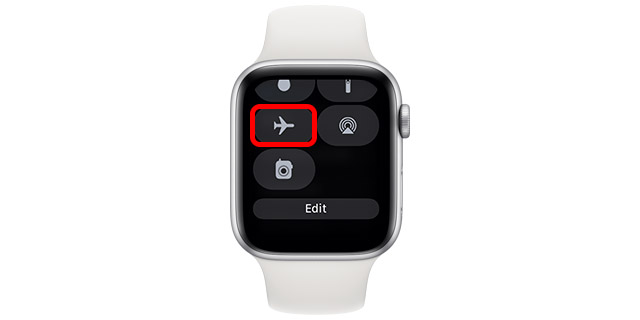 If that didn’t work, the next step to take is restarting your Apple Watch. To do this, just press and hold the Digital Crown and the side button together until you see the Apple logo on the watch screen.

If restarting didn’t fix your problem either, try setting up your LTE plan again. To do this, follow the steps below.

If nothing seems to be solving the issue, your last option is to contact Apple and have them troubleshoot the problem.

If you’re facing issues with the Bluetooth connection on your Apple Watch, fret not, you’re not alone. A lot of Apple Watch users have reported Bluetooth issues on their watches, and there are a bunch of things you can try to fix the problem on your own.

If the problem still persists, try restarting your Apple Watch. To do this, press and hold the side button and the Digital Crown together until you see the Apple logo on the screen.

If all else fails, you can use this as a last ditch effort. Unpair your Apple Watch from your iPhone completely and then pair it back again. The problem should be fixed now.

The Apple Watch doesn’t really have a great battery life, but it does last a day easily. However, I’ve seen a lot of people report that the battery life on their Apple Watch has taken a huge hit all of a sudden. Sometimes this happens due to a new update, and sometimes it happens because of bugs that may be lingering on in older watchOS updates as well. Fortunately, there are things you can do to solve this problem.

Update to the Latest Software

First and foremost, you should check if your watch is updated. You can do this by going to Settings -> General -> Software Update. If there is any pending update, install it on your watch and see if that fixes the battery life issue.

If there are no pending updates for your watch, try restarting it and see if that fixes the problem. In order to restart your Apple Watch, simply press and hold the Digital Crown and side button at the same time until the Apple logo shows up.

As a last resort, you can try resetting your Apple Watch completely. To do this follow the steps below. 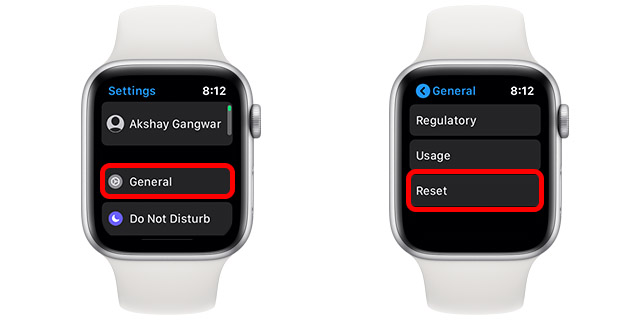 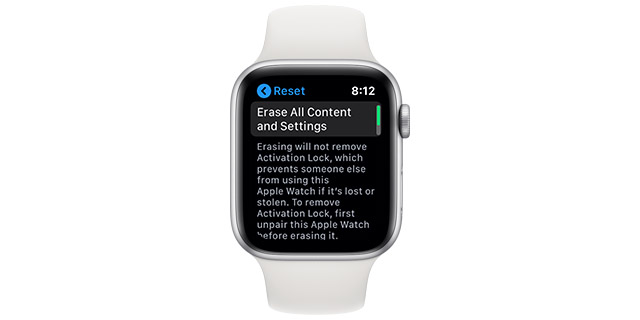 Once you have reset your watch, pair it with your iPhone again.

If nothing is working, contact Apple. While you’re waiting for the scheduled date of your appointment at the service center, put your watch into Power Reserve mode. This way you will at least be able to use it until you’re able to show it to an Apple service rep.

One of the main purposes of the Apple Watch is to track activities and record workouts. So if your watch isn’t doing that, it’s an understandable problem. Here’s how to fix it.

Ensure Fitness Tracking Is On

First off, make sure that fitness tracking is turned on for your Apple Watch. To do this, launch the Watch app on your iPhone and head over to Privacy. Here, ensure that the toggle next to ‘Fitness Tracking’ is enabled. 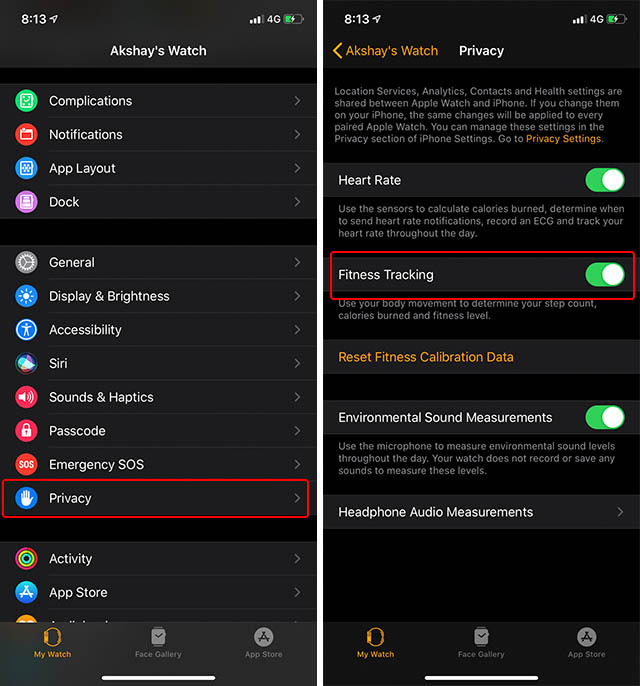 Sometimes the Apple Watch can have trouble recording and tracking activities if it isn’t properly secured on your wrist. Make sure the watch strap is tightened and that your watch has a snug fit on your wrist.

If you’re wearing your watch snug but it still doesn’t track activities, chances are you need to calibrate your watch again. 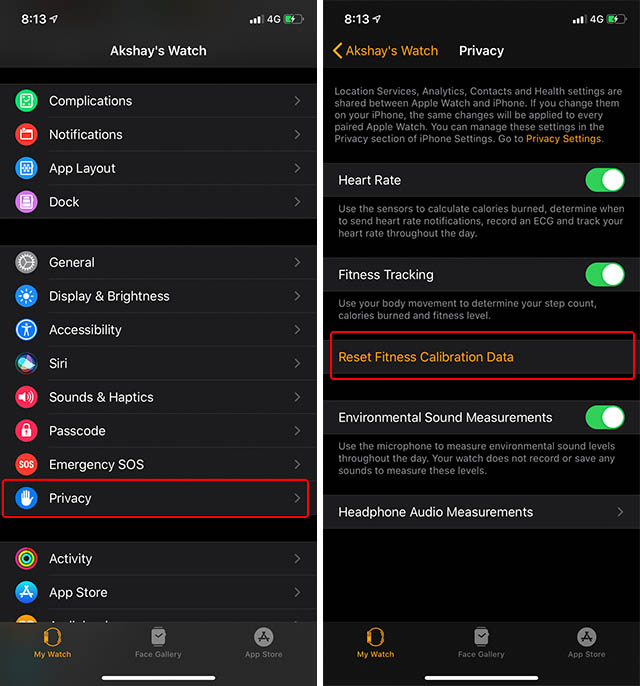 Having trouble sending messages from your Apple Watch? This problem, while common, is also easily solvable. Here’s what you need to do.

Check if You’re Signed in 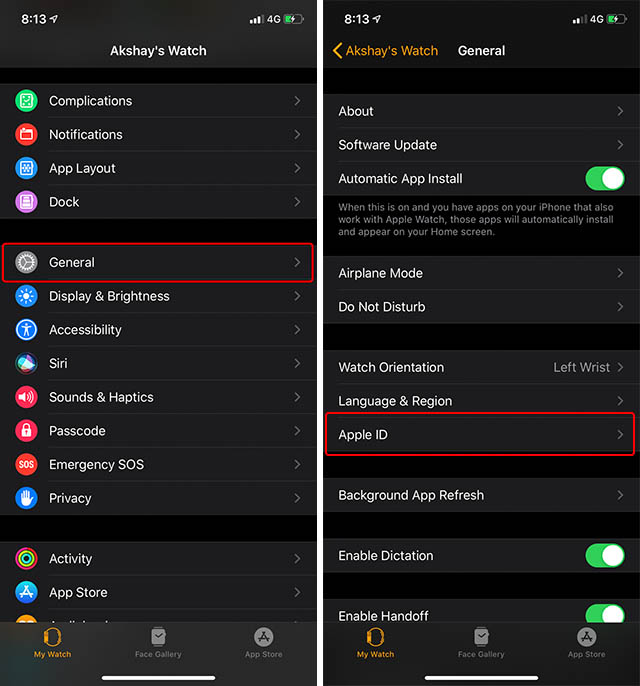 If you aren’t, sign in and you should be able to send messages.

Turn iMessage Off and On

If you were signed in to your Apple ID, this is what you need to do. 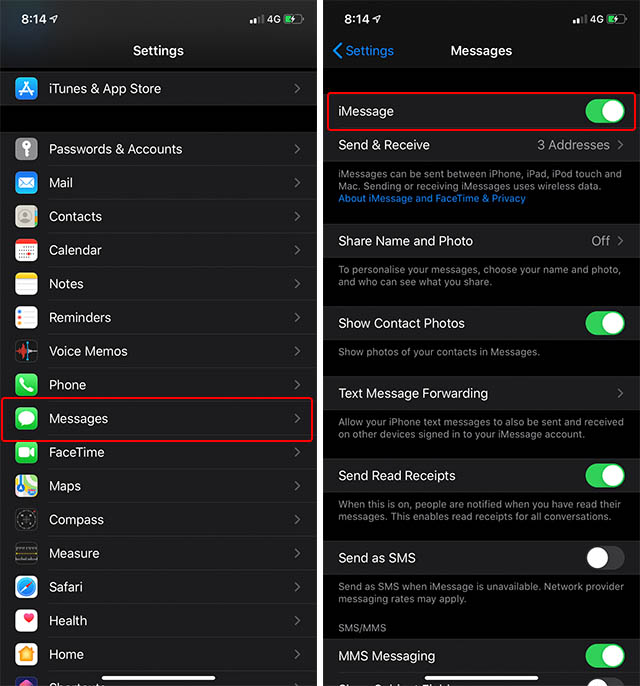 This particular Apple Watch problem isn’t really a problem as much as it is Apple being filled with hubris about knowing what’s best at all times. If your Apple Watch face looks like it has no colors on it (usually on the Infograph watch face) here’s what you need to do. 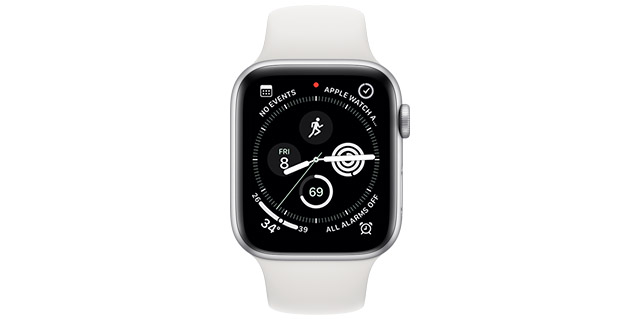 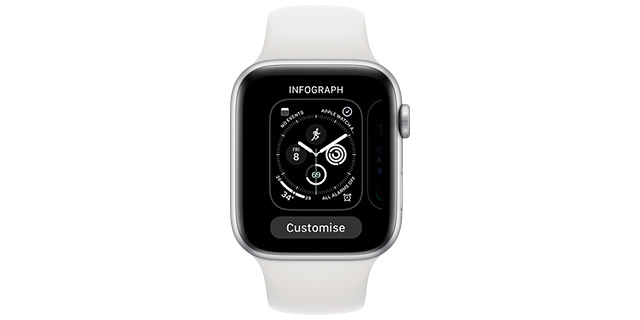 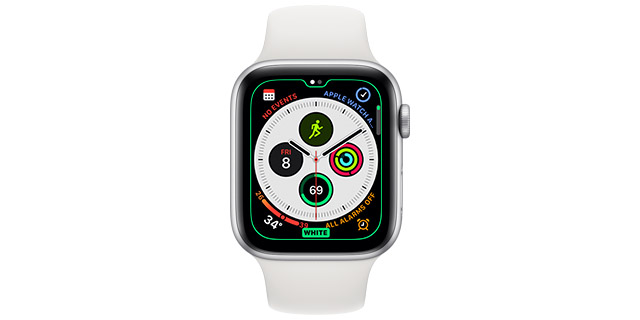 I have seen some reports on the internet of the Apple Watch showing a red exclamation mark on the screen. This usually happens after an update, and it could mean that your Apple Watch is bricked.

You will have to take it to the Apple Store, but there’s one hail mary pass you can try.

Press and hold the Digital Crown and the side button together for a few seconds and see if the Apple logo pops up. Chances are, a forced reset might fix things if it’s not a hard brick.

If it doesn’t work, you’re left with no option other than taking it to the Apple Store. 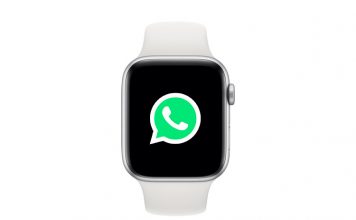 The Apple Watch boasts of a lot of amazing watchOS apps but unfortunately, WhatsApp isn't one of them. That's very surprising, because it makes...
Akshay Gangwar - Jan 11, 2021 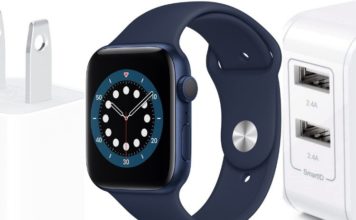 With a view to becoming carbon neutral by 2030 (20 years sooner than IPCC targets), Apple no longer ships chargers - neither for iPhone...
Rajesh Mishra - Jan 6, 2021 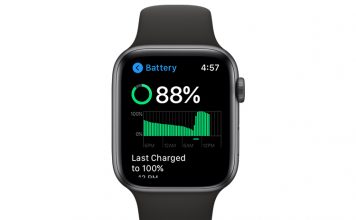 The Apple Watch has a fairly decent battery life in general. While Apple claims an 18 hour battery life on watches like the Apple...
Akshay Gangwar - Dec 30, 2020 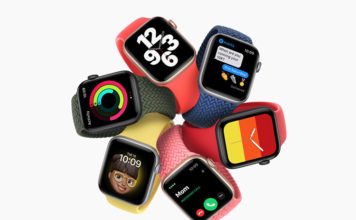 Apple likes to keep a tight control over many aspects of its devices. The infamous walled-garden that Apple devices exist in also extends to...
Akshay Gangwar - Dec 30, 2020 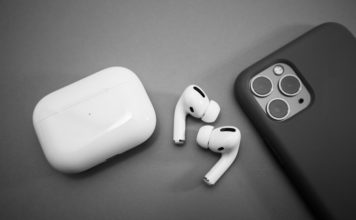 If you're an AirPods Pro user, you probably know that they offer pretty good noise cancellation. Plus, the transparency mode offered by AirPods Pro...
Akshay Gangwar - Dec 21, 2020