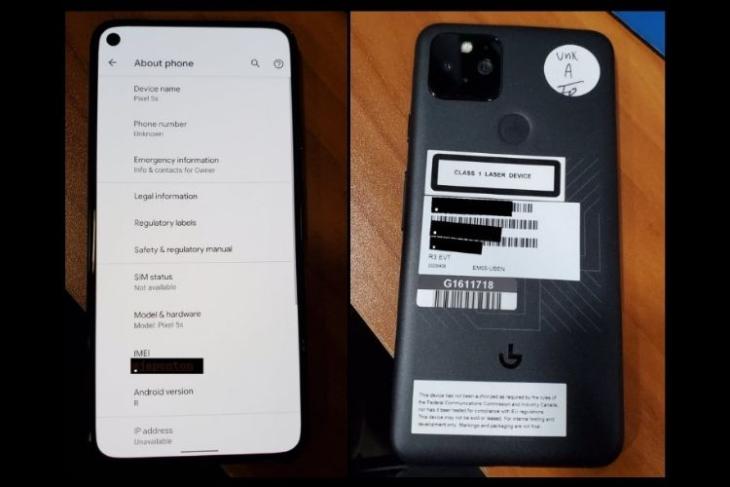 Alongside the Pixel 4a launch earlier last month, Google teased two of its upcoming smartphones – the Pixel 4a (5G) and Pixel 5 officially. The company gave us a sneak peek at both the devices, which will look more alike than apart. We have since seen a myriad of design and specification leaks for both of the phones. Today, however, the Internet is buzzing with the existence of yet another Pixel smartphone – the Pixel 5s.

The leaked images, attached below, have been shared on Twitter by Mexican radio host Jose Antonio Ponton. The images not only offer a closer look at the metallic finish rear panel but also the front of the Pixel 5. You can see the square camera cutout (borrowed from the Pixel 4) with the exact same primary sensor and an ultra-wide sensor, as per reports. A capacitive fingerprint sensor is also found on the rear. It replaces the Face Unlock technology found aboard the Pixel 4 flagship series last year.

This is the first time we get to see the display of the Pixel 5, with the punch-hole cutout at the top left, in all its glory. It looks exactly like the recently launched Pixel 4a on the front. The thing that should, however, catch your eye is the model name for the device. It is the Pixel 5s and suggests that Google will unveil two Pixel 5 variants in the coming weeks.

Yeah, you read that right. There will be two Pixel 5 variants. The second one, however, will not be a bigger XL variant. Instead, reports suggest that the leaked device carries model number GD1YQ, which along with G6QU3, is said to support both mmWave and sub-6GHz 5G networks. The other two Pixel 5 variants carry the model number GTT9Q and G5NZ6. These will only support the sub-6GHz 5G network.

So, Google will finally unveil the Pixel 4a 5G, Pixel 5, and Pixel 5s alongside new Nest hardware really soon. It has already teased its Google Home successor officially. The company will most likely launch its upcoming flagship phone on September 25, as per leaks.