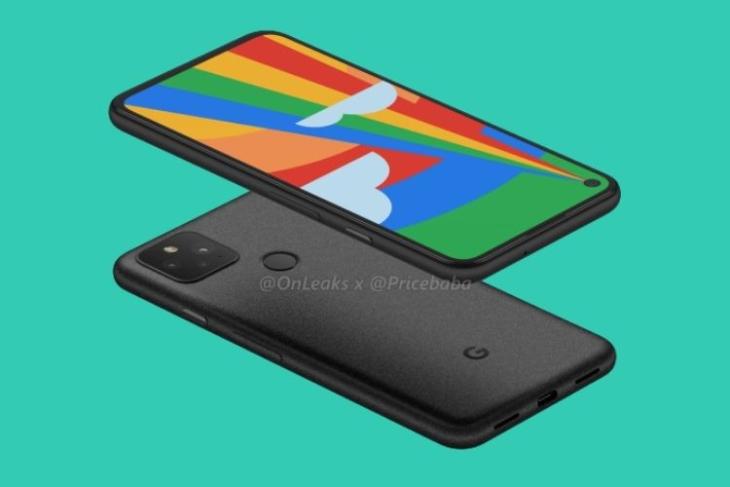 Just recently, we learned that Google Pixel 5 (and the Pixel 4a 5G) could be unveiled on September 30th. The company already gave us a sneak peek at its upcoming flagship – only a side view though. A few leaks have since popped up here and there, but today’s Pixel 5 renders come from the most reliable source.

Thanks to OnLeaks and Pricebaba, we have got our best look at the upcoming Pixel 5 smartphone.

And right off the bat, I can say that you will be underwhelmed with this design. This flagship Pixel 5 looks exactly like the Pixel 4a – complete with the punch-hole cutout on the front and a square camera cutout on the rear. You have a physical fingerprint sensor on the rear as well.

Fans of a rear-placed fingerprint sensor will certainly be happy about this change. It, however, makes me uncomfortable as Google completely nixed the fingerprint sensor from its previous flagship – Pixel 4 – in favor of facial recognition. And now, it’s most likely going back to a capacitive one and not even an in-display fingerprint sensor.

You can obviously see the brushed metal finish of the unibody construction of Pixel 5. We get a closer look at the black variant right here but a recent leak suggested that it will come in a green colorway as well. If you don’t tell anyone, Pixel 5 can easily pass as the Pixel 4a XL that didn’t debut alongside the standard variant.

As for the specs, you must have already heard that Pixel 5 will be powered by the mid-range Snapdragon 765G chipset as opposed to the flagship Snapdragon 865 chipset. It will boast 5G connectivity support, the same as the Pixel 4a 5G. There’s at least 6GB of RAM and 128GB of built-in storage expected to be on board.

The Pixel 5 has a square camera cutout that looks much like the Pixel 4. However, the cutout now has three sensors and an LED flash. Two of them are said to be camera sensors while the third is still unknown, as per the report.

Pixel 5 is also expected to feature a QHD+ screen with a 90Hz refresh rate and a small 3,080mAh battery under the hood. It will include a USB Type-C port but the 3.5mm audio jack will be missing in action. To be honest, the Pixel 5 looks underwhelming but at a rumored starting price of $699, it could be a preferred pick for buyers looking for amazing cameras.