Internet speed is one factor which plays a crucial role when choosing a network carrier, and at times when India’s telecom sector is witnessing a heated competition, the crown for the fastest internet speed provider is a highly coveted one.

OpenSignal has published its latest ‘State of Mobile Networks’ report which has revealed that Airtel provides the fastest 4G internet speed in India, beating archrival Reliance Jio by a hefty margin. 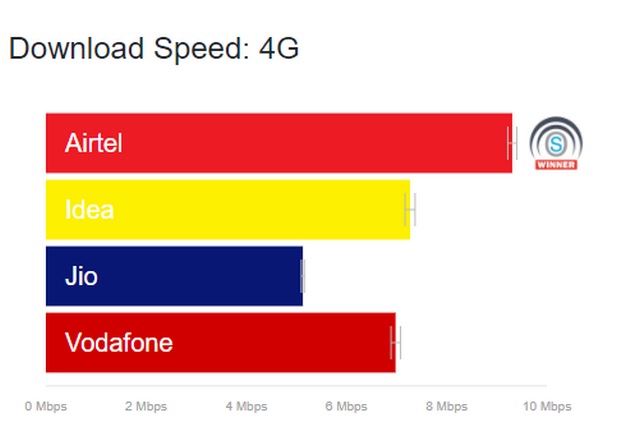 Interestingly, Reliance Jio came in at a distant fourth, providing the slowest 4G internet speed among the big four at just 5.13 Mbps. But 4G is not the only domain where Airtel emerged as the leader, as the company also topped the list of telecom operators offering the fastest 3G speed in India as well as the highest cumulative internet speed in the country, scoring a hat-trick of impressive accolades.

Vodafone was crowned the winner when it comes to providing the best 3G and 4G networks with the lowest latency figures. The only consolation for Reliance Jio came in terms of 4G network strength, with the test devices being able to find a Reliance Jio LTE signal 96.4% of the times during the test period. “Such a score is exceptional, reflecting Jio’s commitment to build out a 4G-only network without 3G mobile data services to fall back on. What’s more, Jio’s impressive LTE reach is only improving, though incrementally”, said OpenSignal’s report on Jio’s rapid growth.

Even though Airtel’s 4G internet speed went up, the other three operators saw average speeds go down since the last edition of OpenSignal’s network report. However, even the fastest LTE speed score in India (Airtel: 9.3 Mbps) falls well below the global average 4G speed which stands 16.9 Mbps, giving a clear idea how much Indian telecom operators still have to work to at least reach the global average, let alone be among the fastest ones.