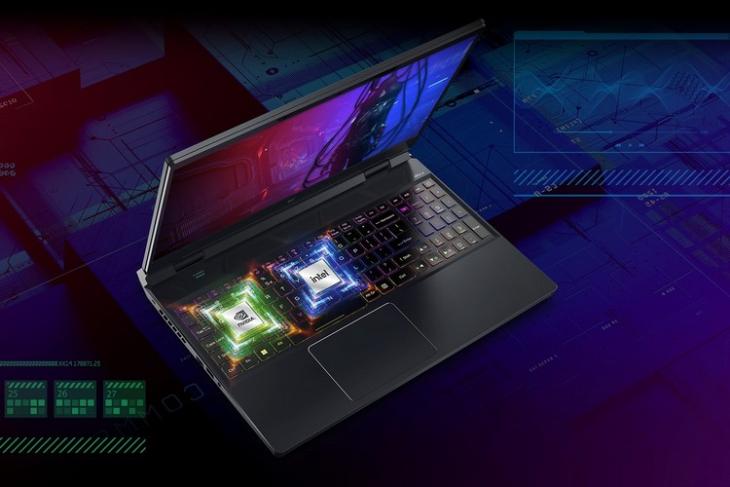 During its next@Acer event, Acer announced an array of new laptops under its Predator, Nitro, TravelMate, and other lineups that come with all the latest features and the newest components from Intel, AMD, and Nvidia. Check out the details below to find out more!

Starting with the flagship Acer Predator Helios 300 SpatialLabs Edition, the high-performance gaming laptop comes with a stereoscopic 3D display that lets users experience gaming in a more immersive way than ever. The 3D stereographic tech, as per Acer, uses the data in games to create the 3D effect as most objects in games are already developed in a 3D space.

Furthermore, the company integrated a lenticular lens into the 15.6-inch UHD display (in 2D mode). In 3D mode, the horizontal resolution is cut in half to direct the pixels at each of the user’s eyes. Now, it is worth noting that although the 3D data in games are already there for the laptop to use, the device still needs to create dedicated profiles for the titles. Hence, upon launch, over 50 games will be supported by the 3D display, and more will be added going forward.

Under the hood, the Predator Helios 300 SpatialLabs Edition packs the 12th-Gen Intel Core i9-12900H CPU paired with an Nvidia RTX 3080 GPU. As for the memory, the laptop packs 32GB of 4,800MHz DDR5 RAM and up to 2TB of PCIe Gen 4 SSD. It also comes with Acer’s AeroBlade 3D Fan design and a liquid metal thermal compound to keep the device cool during high-performance operations.

The device will be available for a starting price of $3,399 (around Rs 2,64,172) and will go on sale in the fourth quarter of 2022. Although Acer did not share an exact launch date of the laptop.

Acer has launched two new convertible devices under its Spin series – the Acer Spin 5 and the Spin 3. The Spin 5 now comes with a 14-inch 16:10 display with a screen resolution of 2,560 x 1,600 pixels and a 88% screen-to-body ratio. The panel also supports touch and stylus input and the laptop has a dedicated slot for a stylus. Furthermore, the company has integrated its TwinAir cooling system that comes with dual D6 copper heat pipes into the device to deliver improved thermal performance.

The Spin 3, on the other hand, is an entry-level model that now comes with a 12th-Gen Intel CPU and fast charging capabilities. It also has a 16:9 Full HD display and has a 2-in-1 form factor with support for different modes like Tent mode, tablet mode, and more.

Other than these, the company also introduced a new Acer Swift 3 OLED that comes with a 14-inch OLED panel and 12th-Gen Intel H-series CPUs. However, the device is just 17.9mm thick and weighs only 1.4kg. The display is a 2.8K OLED panel and has a 92% screen-to-body ratio. Furthermore, there is a Full HD webcam and other advanced features like Temporal Noise Reduction for improved video quality in low-light, AI noise reduction for enhanced mic quality, and more.

Apart from the Windows-powered laptops, Acer has announced a new Chromebook laptop- the Chromebook Spin 714. It is a 14-inch hybrid device, sporting either a Full HD+ or a QHD+ panel. And as it is a 2-in-1 device, the display supports both touch and stylus input. It also comes with a stylus with 4,096 levels of pressure.

Under the hood, the Acer Chromebook Spin 714 packs up to a 12th-Gen Intel Core i7 processor. The device also has two Thunderbolt 4 ports, an HDMI port, and a USB-A port, covering all your needs. As for the memory, the laptop comes with up to 16GB of LPDDR4X RAM and 512GB of internal SSD.

Other than these, there is an optional fingerprint sensor, a dual-mic array, and a Full HD webcam aboard the device. It also has dual stereo speakers with DTS audio support and is MIL-STD-810H certified for durability. The device will be available to buy in August and start at $749 (around Rs 58,212) in the US. It will also be available with a Chrome Enterprise upgrade. However, that model will start at $1,099 (~Rs 85,414). An Acer Chromebook Tab 510 device has also been launched, which starts at $399.99 (around Rs 31,000).

The TravelMate P4 clamshell laptop comes in a couple of screen sizes, including a 14-inch and a 16-inch model, while the hybrid P4 device comes in a single 14-inch variant. The convertible model, as expected, comes with support for touch and AES 1.0 pen for quickly taking notes, drawing, or sketching.

Under the hood, the TravelMate P4 laptops are either powered by 12th-Gen Intel Core processors, up to Core i7 with vPro or with up to AMD Ryzen 7 PRO CPU. They can also pack up to 32GB of DDR4 RAM in the Intel-powered models, while the AMD models pack DDR5 RAM. As for the internal storage, both laptops can pack up to 1TB of SSD storage.

Other than these, the laptops are MIL-STD-810H certified for durability and use up to 37.7% of post-consumer recycled plastics. The Intel models also come with Thunderbolt 4 ports and support for LTE and Wi-Fi 6E technologies.

Coming to the TravelMate P2, it comes in a 14-inch or a 15.6-inch display option and has an aspect ratio of 16:9. Inside, the laptop packs Intel’s 12th-Gen CPUs with vPro (up to Core i7), paired with up to 32GB of RAM and 1TB of SSD storage. The device is also MIL-STD-810H certified and supports Wi-Fi 6 and optional LTE technologies.

Lastly, Acer introduced two new laptops under its ConceptD line – the ConceptD 5 and the ConceptD 5 Pro. The new ConceptD 5 series is getting a new 16-inch 16:10 display with a screen resolution of 3,840 x 2,400 pixels and a peak brightness of 400 nits. The OLED panel is also Pantone-validated and Delta E<2 calibrated to deliver accurate colors and deeper blacks.

Under the hood, the new ConceptD 5 series can be packed with up to an Intel Core i7-12700H CPU and up to an Nvidia RTX 3070 Ti with Studio drivers. The Pro-variant, however, comes with an RTX A5500 GPU, unlike the standard model. There is also a 99.98Whr battery inside the laptops and an array of ports, including HDMI 2.1, Thunderbolt 4, and others.

So, these are some of the new Acer laptops coming later this year. Let us know your thoughts about them in the comments below, and stay tuned for more updates.