Google has been making developments to make YouTube more accessible in countries like India, where the internet penetration, as well as internet speeds, isn’t on par with other developed countries. The company released the offline feature in YouTube last year, and later on, also announced the YouTube Go app. The offline-centric YouTube app has finally arrived on the Play Store. Right now, it’s only available in India but according to Google, it should arrive in more countries later on. So, if you have been wondering what YouTube Go is all about, we have you covered.

The YouTube Go app focuses on offline viewing and sharing of videos. While the app does let you stream videos, its priority lies in letting you save and share videos with ease. The app also makes sure that it does not take up too much storage on your device and thus, it’s only 8.5 MB in size. Also, when you save videos in YouTube Go, it lets you choose between different video quality, along with a mention of the file size and the storage left in your device. So, it’s basically a YouTube lite app. 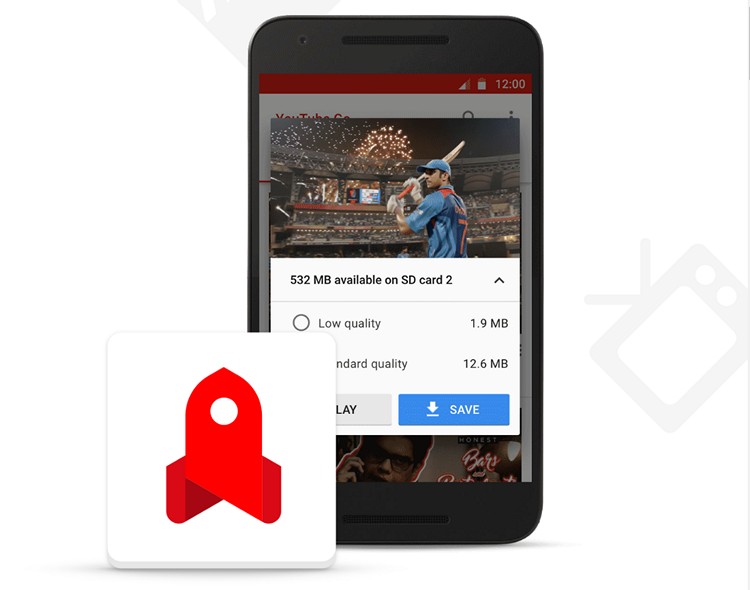 The app also lets you share videos offline via Bluetooth, and lets you find friends that are using the app by verifying your phone number. So, now that you know what YouTube Go brings to the table, let’s see how it works.

The YouTube app has arrived in an unreleased “beta testing” form but it should be close enough to the stable app that should be released soon. You can download the app from the Play Store or but if don’t live in India, you can get the app from APKMirror. 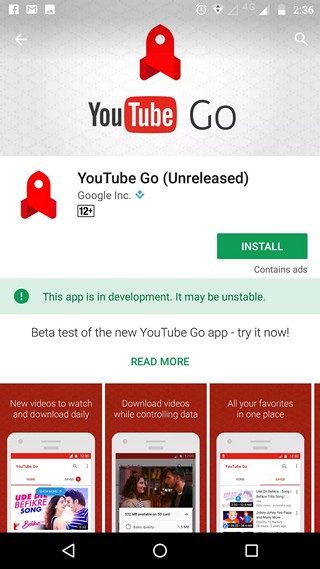 Once you have installed the app, you can launch the app and it will first ask you to select the language. There’s English, Hindi and other Indian languages, as of now. Once you have selected the language, the app will show you different slides showing off the different features in the app. 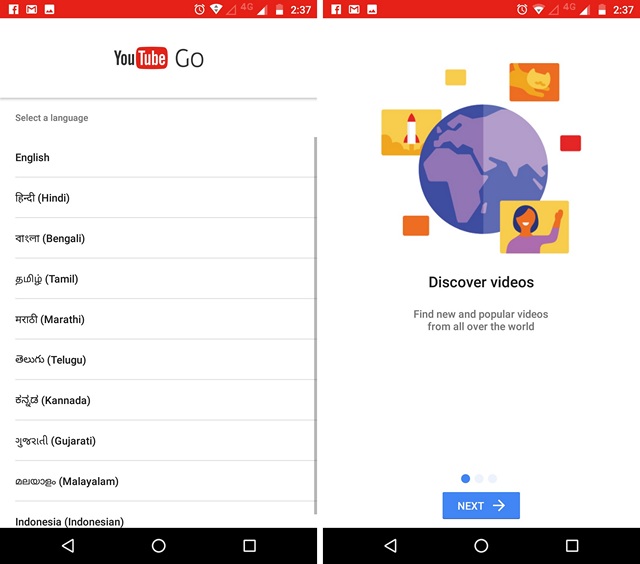 Then, the app will ask you to enter your mobile number, after which you will have to select the Google account you want to use with YouTube Go. Once done, your number will be verified and you will be taken to the home page of the app. 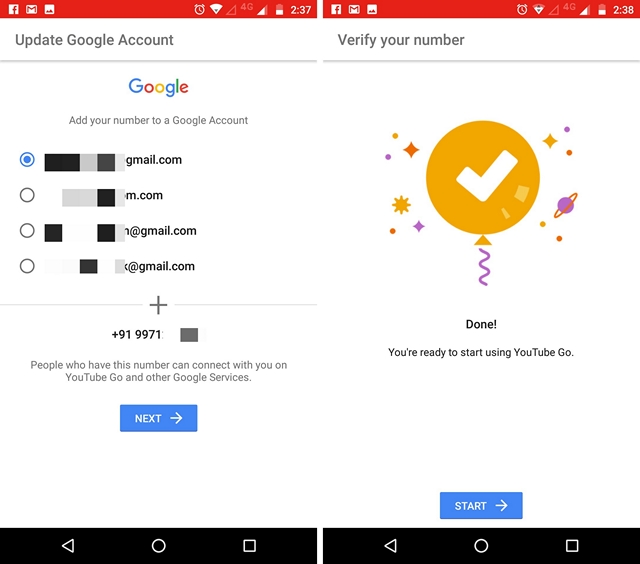 The home page of the app features two tabs: Home and Saved. The Home tab shows you 20 videos, and when are you are scrolling up from the bottom, you get a “Show More” button at the top to get new videos. There’s also the search button and a three-dot menu button at the top right, which lets you head to “Settings” or “Help & feedback”. 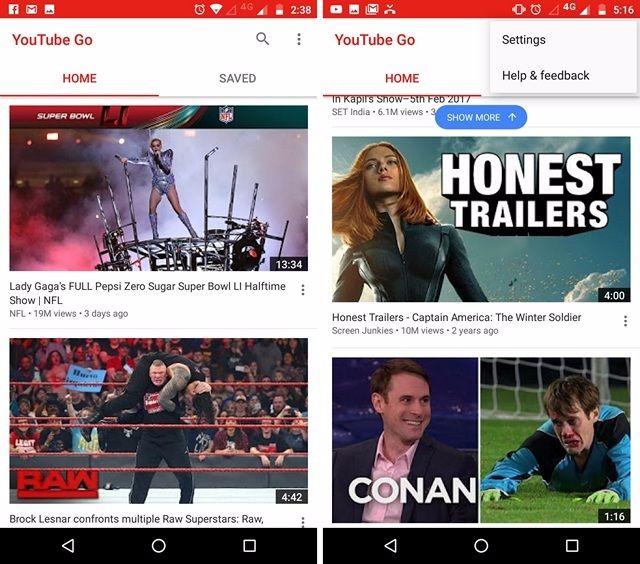 When you tap on a video, you get the preview of the video, along with options to save the video in Basic (240p) or Standard quality (360p), with the size they will take in your phone. You can also hit the “Play” button to stream the video. Even the stream is available only in 240p or 360p, no HD here. When you hit the “Save” button, the video is downloaded and is available in the Saved tab. 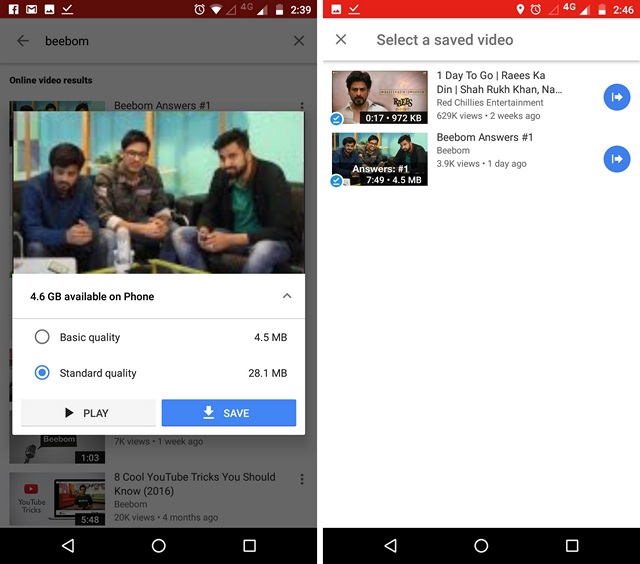 When it comes to the play page, it’s fairly limited when compared to the full fledged YouTube app, which is understandable, considering the light nature of the app. There are the usual playback options, but you cannot change the video quality, like/dislike a video or even read the comments. There’s no option to subscribe to a channel or even access subscribed channels. I don’t like the fact that there are no comments because if you do visit YouTube a lot, you’d know that the comments section can sometimes be more interesting than the video itself. 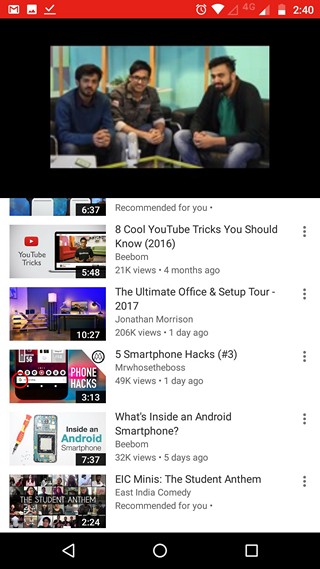 Then, there is the sharing feature. In the Saved tab, you will find two options at the bottom: “Share” and “Receive”. You can just hit the Share button on one device and the Receive button on the other device. Then, the device will be scanned and you can easily share the video over Bluetooth. 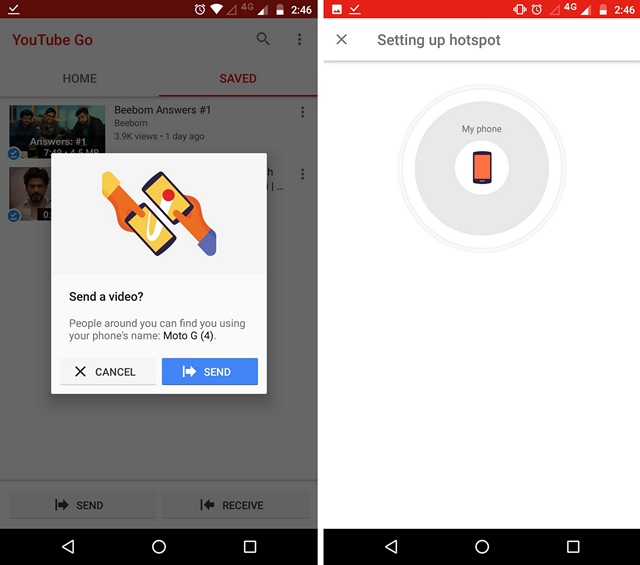 Since YouTube Go is still in a beta phase, there are some bugs. For me, the sharing feature was a little patchy. Other than that, the app is great for people who have limited mobile data bandwidth as well as speed. I especially like the offline sharing feature.

Well, that was all about the YouTube Go app. I’ll be updating this post when the app releases on the Play Store for everyone but I’ll still suggest you to try it out. Tell me if you find the app useful and if you will be using it over the YouTube app. Do let me know your thoughts in the comments section below.