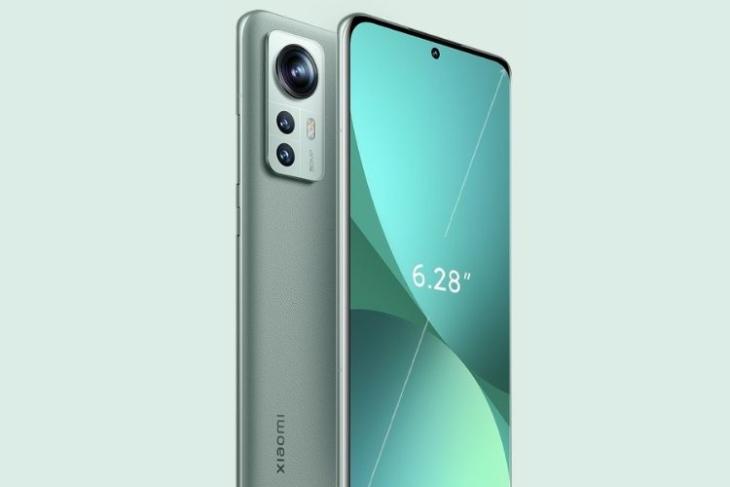 Following various leaks, rumors, and hands-on images, Xiaomi confirmed the launch date of its much-awaited flagship series, the Xiaomi 12 series, earlier this week. Now, we have the first look at the Xiaomi 12, thanks to leaked official press renders of the device. Furthermore, a leaked infographic image of the Xiaomi 12 gives us an idea of the expected specs and pricing. Let’s take a look at the details below.

Starting with the renders, reputable tipster Evan Blass (aka @evleaks) recently took to Twitter to share the official renders of the standard Xiaomi 12. Blass shared three images of the device, showcasing it in three different colorways – Green, Blue, and Purple. You can check out the tweet right below.

Now, the green-colored variant of the Xiaomi 12 features a vegan leather-based back panel, much like the vegan leather variant of the Mi 11 that the company launched in China. The other color variants, however, seem to have a standard AG glass matte back panel. Also, the renders reveal that the device will feature a centered punch-hole selfie camera and a triple camera setup on the rear.

Moreover, these images look to be the official press renders, which the company will presumably use to market the device once it launches on December 28. The previous renders by OnLeaks, however, were not.

Other than the official renders, a recently leaked infographic image has revealed the specs and the expected pricing of the Xiaomi 12. The leaked image comes from a Chinese source on Weibo called Panda is bald.

According to the leak, the Xiaomi 12 will flaunt a 6.28-inch display with support for a 120Hz refresh rate, which has received an A+ rating from DisplayMate. We also learn that the screen will support HDR10+ and Dolby Vision, and boast a 2400 x 1080p resolution.

Coming to the cameras, the smartphone will sport a triple camera setup at the back. This includes a massive 50MP primary lens with f/1.9 aperture, a 13MP ultra-wide lens with a 123-degree FOV, and an unspecified telephoto lens with a 3x zoom support and OIS.

Furthermore, we already know that the device will be powered by the latest Snapdragon 8 Gen 1 SoC, paired with up to 12GB of RAM and up to 256GB of storage. There will also be a 4,500mAh battery with support for 67W wired fast charging and 30W wireless fast charging.

Other than these, the Xiaomi 12 will support Wi-Fi 6, Bluetooth 5.2, and 5G networks out of the box. It will also come with stereo speakers with Dolby Atmos support.

Now, it is worth mentioning that although the leaks seem legit, they are not official at the end of the day. Hence, we’d suggest you take the information with a grain of salt and wait for Xiaomi to officially announce the Xiaomi 12 series next week. We will cover the event on our website in real-time next week, so stay tuned for updates.